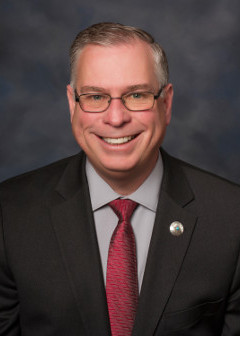 A New Mexico lobbyist and policy advocate in an open letter issued on Tuesday accused a Democratic state senator of sexual assault and harassment and has called for him to resign from the Legislature.

Marianna Anaya, who lobbied during the 2022 legislative session, including for a voting coalition made up of a number of organizations*, issued an open letter detailing instances where she said she received unwanted sexual comments and advances from Sen. Daniel Ivey-Soto, D-Albuquerque.

“Over the last eight years, my advocacy work has focused on helping individuals and families gain access to what they need – from better working conditions and quality education to access to healthcare and expanded voting rights,” Anaya wrote. “Over the years, I have collaborated with legislators who share these values and honor their positions by doing good work for the people of our community. Unfortunately, several of my interactions with you have made it clear that you do not respect the authority you have as a legislator, but rather, abuse the position.”

According to Anaya’s letter, her first concerning encounter with Ivey-Soto was in 2015 when Anaya worked for then-congresswoman and current Gov. Michelle Lujan Grisham. Anaya wrote that she and Ivey-Soto were separately attending a reception hosted by the National Education Association. When she and Ivey-Soto were alone at a cocktail table, Anaya said, Ivey-Soto allegedly “slid [his] hand across [her] side and disgustingly groped and pinched [her] buttocks.”

“I did not know what to do or what to say – I just hoped that it would not happen again,” she wrote.

Then, Anaya wrote, towards the beginning of the legislative session in January 2022, she and Ivey-Soto met to discuss a voting rights bill that Anaya was lobbying to pass. She alleges that Ivey-Soto was drinking wine and then pushed her to drink more than she was comfortable with. During that conversation, Anaya wrote, she confronted Ivey-Soto about the groping incident six years prior. She wrote that he acknowledged the incident, but stopped short of accepting responsibility.

“You were drinking throughout our conversation,” Anaya wrote. “When you emptied a bottle of wine into my glass and I said it was too much, you told me it was not too much, and then forcefully told me to drink it. When I left, you asked if you could give me a ‘non-creepy hug’. I quickly left your office.”

Several days later, Anaya wrote, she asked to meet with Ivey-Soto to further discuss the voting rights bill, but this time in a public place. In her letter, Anaya recounted that Ivey-Soto spent much of the evening making political deals with Republican lawmakers in the restaurant. When he sat down, she wrote, he tried to get her to sit closer to him and that when she tried to talk about the voting bill, he began to yell at her. She also wrote that when he continued to be aggressive towards her, she tried to change the subject, but Ivey-Soto continued to make unwanted sexual comments.

“Finally, I had to tell you we needed to stop talking about work because you became too aggressive,” Anya wrote. “I tried to switch subjects and tell you about a home renovation project that I had completed. Instead of engaging in a respectful manner, you sexualized the situation and asked me,’ Were you wearing a tool belt? What else were you wearing?’ Our dinner did not last much longer after that, and I was relieved that the evening finally ended.”

Anaya also alleged in her letter that after the dinner, Ivey-Soto retaliated against her by holding up the voting rights bill in the Senate Rules Committee, which he chairs. She recounted instances where Ivey-Soto allegedly yelled at her for social media comments from other community advocacy groups that accused him of deliberately sabotaging the bill.

Anaya also wrote that she had consulted with other women who said they had “similar, or worse interactions” with Ivey Soto.

“You have a pattern of sexually abusive behavior and abuse of your power as a legislator, and I want every woman who has to work with you to know about your actions and hold you accountable,” Anaya wrote.

Anaya, through her attorney, sent a copy of the letter to Ivey-Soto asking him to resign and another to the Legislative Council Services as a formal complaint and called on the Senate to expel Ivey-Soto.

Ivey-Soto told NM Political Report in a phone interview on Tuesday afternoon that he had not seen the letter, but that he was told of Anaya’s accusations from other reporters. He said he does not recall the incident in 2015.

“I’m truly bewildered by this,” Ivey-Soto said. “And I have no point of reference for the accusation.”

What Ivey-Soto does recall, however, is a meeting he had with Anaya in January 2022 over a bottle of wine he said the two shared while they had a “healthy” conversation.

“She challenged me on some things, which is fair, and we had a conversation back and forth,” Ivey-Soto said.

He said he brought up the fact that an organization she was formally the president of called for his resignation after a number of tense and public interactions with female lawmakers, particularly one with Senate Pro Tem Mimi Stewart, D-Albuquerque on the Senate floor. Ivey-Soto also recalls that Anaya confronted him about the incident in 2015.

“Her recollection is that I reached around and grabbed her ass, and I was horrified when she told me this,” he said.

He said he still doesn’t recall that night in 2015, but likened it to an incident in New York when a boy’s backpack brushed up against a woman and the woman called the police, alleging that the boy groped her.

“I mean, I wasn’t wearing a backpack that night,” he said.

But, he added, he does not recall the reception that night in 2015.

“I don’t know what happened. I don’t remember the event. I have no recollection of the event,” Ivey-Soto said.

He said he also does not remember having dinner with her last month, but said he would have never made sexual advances towards her if they did have dinner together.

“Even assuming that we had a dinner I certainly wouldn’t have been making a pass at her,” Ivey-Soto said. “I respect who she is.”

“I mean, she’s a lesbian,” he said “There’s nothing sexual about the relationship between Mariana and I.”

Anaya declined to comment further on her experiences and directed questions to her attorney, Levi Monagle.

Monagle dismissed the claim that because Anaya is a lesbian, Ivey-Soto would not have made advances towards her.

“I think that the polite and diplomatic comment that I can offer is that sexual abuse and sexual harassment occur without regard to sexual preference or consent, as a matter of definition,” Monagle said.

Monagle said the hopeful outcome for his client is “twofold.”

But, he added, the bigger picture is to stop harassment at the state capitol building.

“The secondary and broader goal is changing the culture that I think everyone kind of acknowledges exists at the Roundhouse,” Monagle said. “I think progress has been made, that this sort of culture of harassment or entitlement has been improving slowly, over the years and decades, but it’s still a pretty pervasive culture.”

Allegations of sexual misconduct in the Legislature are not new. In 2017, another lobbyist accused a Democratic representative of sexual harassment.

Monagle said Anaya hopes that by coming forward she can empower others with similar stories, but that she also “acknowledges what a personal and important decision that is.”

“She also understands, very well, how difficult it is to be the first person to step out onto the limb, and wants these other women that she’s spoken with, about this whole situation, to know that they’re not alone and to know that something’s being done about this, even if they choose to stay silent.”

A common refrain from lawmakers being accused of misconduct is that those accusations come from political opponents as a way to remove them from office. But Monagle said that’s not the case here as Ivey-Soto and Anaya often see eye to eye, politically.

“Senator Ivey-Soto has been a proponent of the kinds of policies that Marianna supports and the people that she works on behalf of have supported,” Monagle said. “This is not a situation of going after someone whose politics, generally speaking, don’t align with your own.”

Ivey-Soto said he would not want to speculate on whether the accusations are politically motivated.

“I hope this is not just politics,” he said.

The director of the Legislative Council Services said he had not reviewed Anaya’s letter when NM Political Report spoke to him, but he confirmed his office had received it.

Procedurally, the complaint will be reviewed by the Senate majority and minority leaders, who will decide whether it needs to be referred to an interim ethics panel. If that interim committee decides to conduct a further investigation, it would be confidential. But if that investigation finds probable cause, the issue would go to a hearing subcommittee, which would conduct its proceeding in public. The Senate as a whole could decide to expel Ivey-Soto, but it would require a two-thirds majority vote, which is 28 votes.

Senate Democratic leadership, through a spokesperson, declined to comment on Anaya’s allegations. A Senate Republican spokesperson said he was not aware of Anaya’s letter at the time, but said he would forward it to the minority floor leader, who did not respond. NM Political Report will add his comments if we receive them.

Progress Now New Mexico is the fiscal sponsor of NM Political Report, but the organization has no editorial control or input.