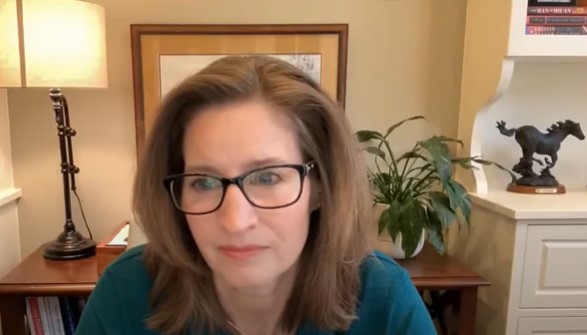 It didn’t take long for a small group founded by the daughter of a couple involved in the 1990s Sagebrush Rebellion to mobilize after President Joe Biden released an executive order in January 2021 that called for conserving 30 percent of the country’s lands and water by 2030.

Since then, American Stewards of Liberty have successfully led counties across the United States to pass resolutions opposing the initiative, including five New Mexico counties—Chaves, Otero, Catron, Quay, Lea and Sandoval. San Juan County may pass such a resolution in the future.

“These resolutions are coming from the people and their spreading around county by county, slowly but surely, and we should respect that,” said Sandoval County Commissioner Jay Block,  who had resolutions drafted and presented to the commission on Feb. 23 opposing both state and federal initiatives to conserve 30 percent of lands by 2030.

Sandoval County Commissioner Katherine Bruch said the resolutions are not originating in the county or even in New Mexico.

“They came from a nonprofit out of Texas. And they started in Otero County and they brought their arguments to a commission who was responsive and moved forward,” she said during the contentious discussion at the Feb. 23 meeting. Bruch was one of two commissioners to vote against the resolution.

The resolutions are almost identical and American Stewards of Liberty openly acknowledges its work to get them passed. In a presentation to the San Juan County Commission on Tuesday, American Stewards of Liberty showed a map highlighted with the counties and local governments in the United States that have passed such resolutions. The executive director, Margaret Byfield, urged San Juan County to follow in the footsteps of the highlighted counties and pass a resolution opposing conservation of 30 percent of the lands and waters by 2030. Byfield is the daughter of a couple who was involved in the Sagebrush Rebellion in the 1990s in Nevada and grazed their cattle without permits on federal lands.

The Intergovernmental Panel on Climate Change’s most recent report highlighted conservation of 30 percent of the earth’s land and water by 2030 as a crucial tool in combating climate change. In the United States, this initiative is officially called America the Beautiful and colloquially dubbed 30×30. Currently, the U.S. Geological Survey estimates approximately 12 percent of the nation’s lands are permanently protected.

“I think the ultimate goal is to eliminate use of the land,” Byfield said during the San Juan County Commission meeting.

The underlying theme of the American Stewards of Liberty’s message is that the 30×30 initiative is a land grab that threatens private property rights and will ultimately lead to large swaths of land being cut off from public access. Bruch, as well as proponents of the initiative, say this is not true.

“The bottom line is it’s not a land grab, nobody’s going to come and take your private property,” Bruch said during the Sandoval County Commission meeting, who later said that the message is often “conspiracy theories run amuck.”

“There’s never been a discussion about grabbing private land,” she said.

In an email, Maddy Hayden, the deputy communications director for the governor’s office, said the 30×30 initiative in the state is “tailored to honor New Mexico’s traditional land uses.” She said local input will be critical to the state’s efforts. She said that the state is having discussions at the local and county level and is currently working to establish a baseline that will be used to build the initiative. Once that is complete, Hayden said there will be opportunities for public comment.

“30 x 30 was designed to make sure we include programs that we already know work, like conservation easements in collaboration with ranchers and willing private landowners, enhancing soil health improvement projects, and expanding responsible forest management practices,” Hayden said. “The initiative seeks to give private landowners additional tools to make sure the good restoration and conservation efforts already underway are counted toward the overall goal of 30% conservation by 2030.”

Byfield said that the conservation easements essentially strip property owners of their rights. She said the landowner essentially sells control of the property. However these easements do not allow the public to access the property and the landowners can work with their partners to develop plans that allow them to continue using the easement as long as the uses do not conflict with the intended conservation purpose.

Byfield said that the landowners are not informed that the easements are permanent; however, land trusts like New Mexico Land Conservancy clearly state that fact on their websites. The New Mexico Land Conservancy’s website says that, while these easements last forever, only the landowner who enters into the agreement receives the tax benefits. That means, if the property is sold, the future owners will not receive the tax benefits but the easement remains in place.

The New Mexico Land Conservancy provides information about existing easements on its website. Many of these properties have continued agricultural use, such as the El Morro Valley Property near Ramah where the ranch continues to raise organic, grass-fed beef while also protecting archaeological sites and conserving wildlife habitat, and Sierra y Llanos Land & Cattle near Las Vegas, NM, where organic hay is grown and cattle are raised.

In terms of public lands, Byfield said the “threats” in the 30×30 plan include an increase in the numbers of wilderness areas, wilderness study areas and national monuments.

Wilderness areas can also help the economy and the City of Farmington, located in San Juan County, has actively been marketing the Bisti/De-Na-Zin Wilderness Area as part of its efforts to develop outdoor recreation.

Funding for American Stewards of Liberty

San Juan County Commissioner GloJean Todacheene asked about the group’s funding during Tuesday’s meeting. While Byfield told the San Juan County Commission that her group receives funding primarily from ranchers and landowners who provide small sums of donations, The Colorado Sun reported that between 2015 and 2019, Donors Trust and Donors Capital Fund, which serve as conduits for donors like the Koch Brothers and the DeVos family, donated $170,000 to the organization.

Ben Neary, a conservation director with New Mexico Wildlife Federation, was first alerted to American Stewards of Liberty’s efforts in the state last year after Chaves County passed a resolution opposing the 30×30 plan. He searched through the county commission’s agendas and discovered that American Stewards of Liberty was listed as consultation for past work as well. After submitting an Inspection of Public Records Act request, he found that Chaves County had paid the group $185,000 for consultation services between 2016 and 2021.

He drafted an article that was published on the NM Wildlife Federation website and has vocally criticized the use of taxpayer dollars to fund the group’s efforts. Chaves County is not the only local government to contract with American Stewards of Liberty. The Salt Lake Tribune reported that Kane County in Utah has paid the group $483,000.

In 2020, Accountable.US filed a complaint to the Internal Revenue Service alleging that American Stewards of Liberty violated the requirements for tax exempt status through its consultation services provided to local governments.

The total contributions American Stewards of Liberty received from all donors in 2019 was $116,000, which made up a little more than a third of the organization’s revenue. The majority of the money the group received came from charging for services, which garnered $204,000 in revenue. Those services, according to Neary, included work done for Chaves County. The same year, the largest expense listed on the tax documents was for executive compensation—more than $192,000, split between Byfield and her husband, the CEO Daniel Byfield. Margaret Byfield was compensated a little more than $91,000 and Daniel Byfield received $101,000.

After hearing the presentation on Tuesday, San Juan County Commissioner Terri Fortner requested that a resolution be drafted in opposition to the 30×30 initiative. Fortner had previously heard Byfield speak in Santa Fe and asked her to present to the San Juan County Commission. Todacheene, the sole Democrat on the commission and a member of Navajo Nation, spoke about colonialism and expressed her support for the America the Beautiful initiative. She said, before the commission votes on a resolution, she would like to hear from proponents of the 30×30 plan.

“We, as tribal people, have always dealt with land being taken away from us,” she said.

Todacheene spoke about how tribes, including her people, fought to get protection for the Bears Ears National Monument in southeast Utah. This region is held sacred by the Navajo, Ute, Hopi and Pueblo peoples who formed a coalition to petition for the national monument.

“When [some people look] at land, they’re thinking what’s underneath, what can I dig up,” she said. “And corporations, of course, are very interested in that.”

She said as the human population grows, resources are limited and corporations want more ore or valuable minerals. Todacheene spoke about future generations.

“What are we going to leave for them if we overdevelop the land?” she said.