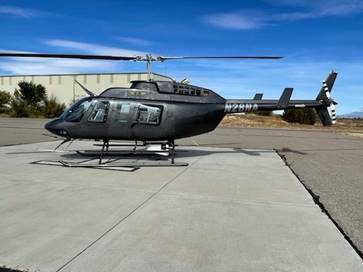 The state’s largest electric utility entered a contract with a company to perform aerial surveys of transmission and distribution systems as part of a wildfire mitigation effort.

This comes after several large, catastrophic wildfires in the western United States have been linked to electric utility infrastructure.

Public Service Company of New Mexico (PNM) announced on Tuesday that it has hired EDM International, Inc. to perform inspections and inventory of transmission and distribution systems in the PNM service territory. These surveys will involve flying a helicopter equipped with cameras above power lines. The high-resolution images captured during the process will allow PNM to evaluate the vegetation as well as rights-of-way and infrastructure integrity, according to a press release from the utility. This will allow PNM to develop a comprehensive plan to address issues.

People in the Albuquerque area as well as around the Sandia, Isleta, Santa Ana, San Felipe and Santo Domingo pueblos may see the helicopter flying low over neighborhoods this month.

PNM budgets $2.5 million annually for wildfire mitigation and the costs for the helicopter flights were included in that budget, according to information provided by Eric Chavez, a PNM spokesperson, by email. He said the flights will not affect customer rates now, but will be included in the next rate review. At that time, he said PNM expects wildfire mitigation efforts will have a minimal effect on the overall review.

If, during the flights, a problem is found, Chavez said that PNM will evaluate it based on potential impact and then assign a crew to “perform the necessary repairs or perform steps to prevent potential issues.”

“With the change in our climate and the growing concern about wildfires across the western part of the United States, these efforts are more important now than ever,” said Wesley Gray, director for PNM Transmission, Distribution, and Substation, in a press release. “Utilities everywhere, including PNM, are enhancing their wildfire efforts.”