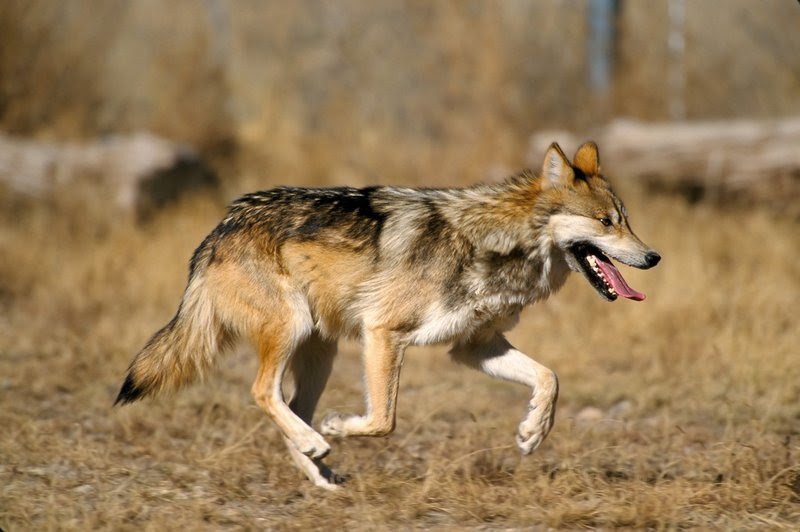 When Bob Daugherty headed up the canyon behind his house to check on his cows, he said he was not surprised to find two of them dead and to discover they had been killed by wolves.

He knew that a wolf that had allegedly killed livestock in another area was relocated to a private ranch known as Ladder Ranch last summer and his grazing allotment is not far from that property.

But that didn’t make it easier for him when he found the yearling heifer and the calf dead.

“It’s kind of a shock. You never want to see that happen,” he said.

Daugherty has a small herd of approximately 100 head of cattle which range on a large allotment stretching up into rugged wilderness country. He said it is possible that more of his cows may have been killed in parts of the allotment that are harder for him to get to and, as of Wednesday, he had seen fresh wolf tracks on the allotment.

The translocation of the wolves last year brought with it outrage from Sierra County officials, who promptly sued to remove the wolf pack. Commissioner James Paxon said Sierra County has yet to have its day in court in that case.

After learning about Daugherty’s loss, state Rep. Rebecca Dow, R-Truth or Consequences, a Republican gubernatorial hopeful, sent a letter to the U.S. Fish and Wildlife Service on March 24 requesting that the agency “carry out an intentional or opportunistic harassment, nonlethal control measures, translocation, placement in captivity, or lethal control of problem wolves.” Alternatively, she requested that Daugherty’s family be given a permit to kill the wolves.

Dow said Daugherty is not the only rancher that has lost cattle in the last month to wolves.

At the center of the controversy is a male wolf that is considered one of the most genetically valuable wolves in the wild, M1693. He was born in captivity in 2018 and, when he was 15 days old, was placed in a wild wolf den in an effort to increase genetic diversity.

Originally, M1693 established his range with a female, F1728, in the Rainy Mesa area. Rainy Mesa has, over the past two decades, experienced more conflict between wolves and livestock than many of the other areas where wolves have been reintroduced.

Michael Robinson, senior conservation advocate with Center for Biological Diversity, attributes this to ranchers leaving cattle carcasses out and wolves beginning to scavenge on them. While he doesn’t know if the male leader of the now-called Seco Creek Pack that allegedly preyed on Daugherty’s cattle got the taste for beef by scavenging, he said that has been documented in Rainy Mesa in the past.

The Prieto Pack lived in the Rainy Mesa area and conflict with ranchers led to members of the pack being killed or maimed by people.

In 2020, the last adult member of the Prieto Pack, a nine-year-old female, died after being caught in a trap near Rainy Mesa and dying of stress the next day. The male pack leader had been killed by federal Wildlife Services agents earlier that year, along with one of the pups.

The next year, M1693, who at the time was the leader of what was then called the Negrito Pack, got attention for allegedly killing livestock. With the Prieto Pack’s fate still a fresh memory, wolf advocates rallied behind relocating M1693 and F1728 to Ladder Ranch. With the relocation, the pack received a new name—the Seco Creek Pack.

The U.S. Fish and Wildlife Service released its annual wolf count data on Wednesday, showing a five percent increase in the population of Mexican wolves roaming in New Mexico and Arizona.

“We are happy to see the wild population of Mexican wolves continue to grow year after year,” Brady McGee, U.S. Fish and Wildlife Service Mexican Wolf Recovery Coordinator, said in a press release. “The Service and our partners remain focused on recovery through improving the genetic health of the wild population and reducing threats, while also working to minimize conflicts with livestock.”

This is the sixth consecutive year that the population has grown; however, environmental groups say high mortality, in part because of illegal killing, low pup survival rates and declining genetic diversity continue to threaten the species.

The count is done by both aerial and ground surveys. Of the 196 animals counted, 84 of those wolves were in New Mexico.

“The disappointing lack of significant growth is a sign that this recovery paradigm is not working,” said Chris Smith, southwest wildlife advocate for WildEarth Guardians, in a press release. “Lobos need better protection and more room to roam and re-establish themselves.”

While the population is increasing, Robinson said genetic diversity has been decreasing. Also troubling for the wolf advocates was the high rate of pup mortality. While 144 pups were born in 2021, only 56 survived.

Aislinn Maestas, a spokesperson for the Fish and Wildlife Service, said in an email that the agency believes distemper likely led to the higher rate of pup mortality. Maestas said the disease tends to cycle through canid populations, including wolves and coyotes, and periodically reduces pup survival rates. The disease also killed two adult wolves.

The Fish and Wildlife Service uses cross fostering as a way to increase genetic diversity, but Robinson criticized cross fostering because the captive-born pups that are placed in wild wolf dens tend to have higher rates of mortality than the wild-born pups. He said entire wolf families should be released rather than relying on cross-fostering to increase genetic diversity. In 2021, a total of 22 pups were placed into seven dens as part of the cross-fostering initiative.

“The positive trend in the number of Mexican gray wolves in the wild is welcome news, but the total of only 196 lobos is keeping them among the most critically endangered animals in the world,” Kelly Burke, executive director of Wild Arizona, said in a press release. “At a time when we are learning that having wolves in the wild here in the Southwest may help save us from the worst of climate change effects, the Service needs to boldly aid, not hinder, lobo recovery.”

Wolves are a part of natural ecosystems and play a role in controlling ungulate populations. Wolves preying on large ungulates like elk can also help cattle ranchers by lowering the competition that cows have for forage.

While statistics show that only a small percentage of cattle are killed by Mexican wolves, the canine still faces staunch opposition from ranchers as well as conservative politicians. Small ranching operations like Daugherty’s are more impacted by the loss of one or two cows than a larger operation.

Paxon said the compensation that ranchers receive when their cows are killed is inadequate. In the case of Daugherty’s cattle, the two who were killed were young and Paxon said Daugherty misses out on the future calves they would have produced. The reimbursement for lost cows does not take into account the loss of money from future generations the cows would have produced.

“How do you keep a ranch in business with you as a head of cows and calves to a pack of wolves in two weeks?” he said.

He said ranching in the Gila area is different from raising cattle in places like Alabama. He said the cattle are sometimes spread out over thousands of acres and ranchers “have to ride for days just to put eyes on their cattle.”

Daugherty emphasized that he is not a wolf hater, but he does not believe that they belong in areas where there are ranching operations.

“Wolves and livestock growers, they just don’t mix,” he said.

The wolf reintroduction began in the late 1990s and this is the first time Daugherty has lost cows to the wolves.

Dow took a bit more of a stance against the wolves, arguing that if people believe in survival of the fittest, then wolves have no place on the range in New Mexico where they were previously eradicated. She said there was a reason the wolves were removed from the range.

Daugherty’s concerns go beyond just his ranching operation. His two sources of income are ranching and hunting, both of which he said could be impacted by the wolves.

Dow argued that while wolves can be used to control elk populations, they are not the only method. She said more hunting tags could be issued and then the elk meat would go toward people who are trying to put meat on their tables.

Wolves have not reached population levels that would lead to large declines in elk populations, but, Daugherty said, if elk become less available for wolves to prey on, it will put additional pressure on cattle ranchers.

“It’s going to be an absolute disaster down the road,” he said.

Dow and Paxon say that the Seco Creek Pack needs to be removed from their current range and that ranchers who lose livestock to wolves should receive greater compensation.

“The average farmer/rancher in New Mexico is in their late 50s,” Dow said. “They’re third and fourth generation ranchers. We’re putting such a burden on them and driving up the cost and the hardship of producing food for us.”

Daugherty and many of the ranchers in the Gila area rely on grazing allotments, which are swaths of public lands where they have the right to graze. Robinson said the grazing rights come with responsibilities and that the government could require the ranchers to implement methods to reduce wolf-livestock conflict.

The reliance on grazing allotments also means that Daugherty is not legally allowed to kill the wolves even if he sees them attacking his cows. Unless the wolf is attacking livestock on private property, ranchers cannot shoot them.

That law has not prevented illegal killing or targeting of wolves, advocates say. Last year, a judge ordered the Fish and Wildlife Service to produce a draft recovery plan that is required to include site-specific management actions intended to reduce poaching.

The Interagency Field Team, which performed the wolf count, documented 25 wolf mortalities. Robinson said while two of them died of distemper, he suspects the majority of them were killed by humans.

There are ways that advocates say wolves and ranchers can coexist and some of them are being implemented in the Gila area of New Mexico. Dow gave an example of one rancher who is following his herd.

Robinson said even wolves like M1693 who have gotten a taste for cow meat and who might look at livestock as an easy source of food can be trained to leave the cattle alone. This requires effort and investment. Range riders can be paid to ride around with the herds and scare off the wolves. Paxon said the range riders “might be pretty good horse people, but they don’t know the country. They have to learn the country before they can haze the wolves.”

Paxon said he knows of one rancher who bought livestock guard dogs to help chase the wolves away.

But, most importantly, Robinson said the recommendations made in reports such as the three year review and assessment released in 2001 should be followed, including requiring the removal of carcasses when cows die.

Until that happens, Robinson said incidents like what Daugherty experienced will continue to occur.