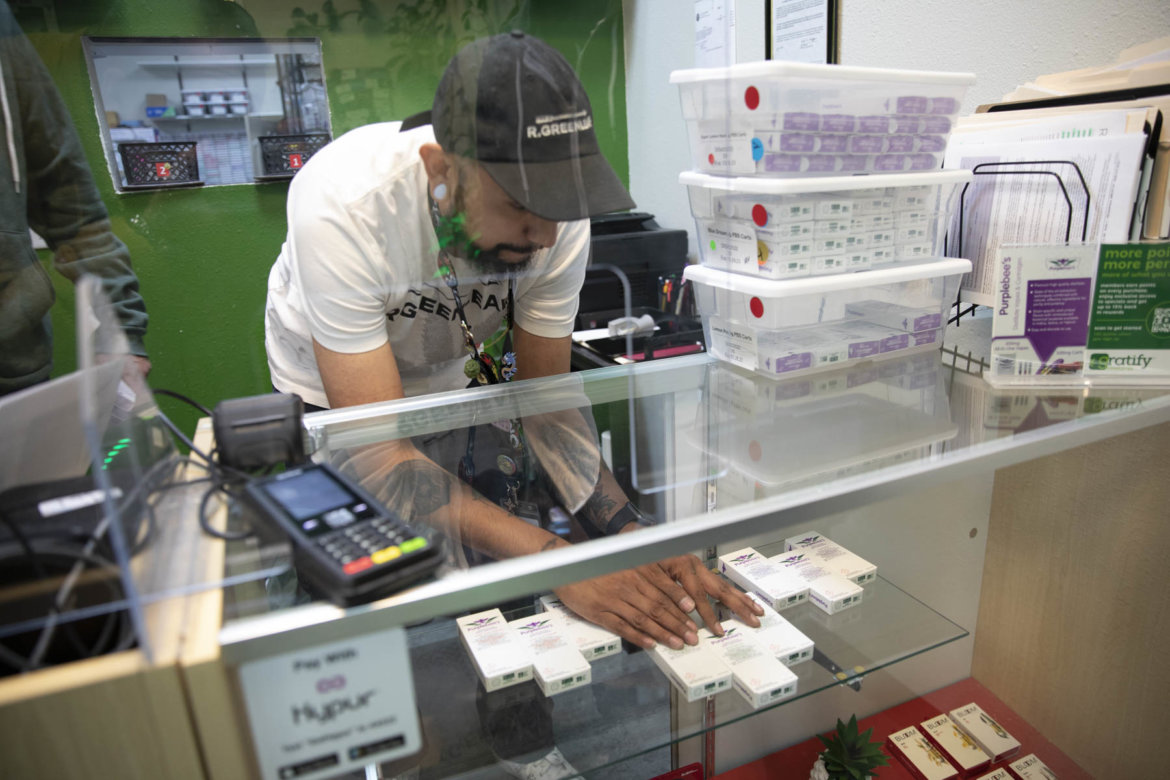 A worker prepares for the midnight sale of legal recreational-use cannabis in Las Cruces.

Cannabis producers in New Mexico have their collective eyes on daily sales numbers to determine what sort of demand there will be moving forward a week after recreational-use sales started.

The New Mexico Cannabis Control Division reported more than $5.2 million in combined medical and recreational-use cannabis sales and more than 87,000 transactions in the first three days. The division is expected to release more numbers Friday morning.

In addition to the hype of first-time adult-use sales, the state’s cannabis industry will likely face a spike in sales on April 20, or 4/20, which is usually the biggest day of the year for cannabis sales.

While some producers told NM Political Report that they are set for the weeks and months to come, one of the state’s largest cannabis companies predicts the state is headed for a “severe shortage” of cannabis, and soon.

“I say we’re 20 days out on the low end, about 25 on the high end,” Ultra Health President and CEO Duke Rodriguez said.

State law defines a cannabis shortage as a situation when supply is “substantially” less than the three month period leading up to the effective date of the Cannabis Control Act.

But Rodriguez, who has long warned about an impending shortage and has advocated for an unlimited cannabis production limit, said the cannabis shortage he is warning about is different than the statutory definition. Rodriguez said the shortage will likely emerge as limited supplies of certain products or cannabis cultivars. He also said that those types of shortages will impact large businesses like his and trickle down to smaller businesses, who likely can’t weather reduced sales, which will ultimately impact those who rely on cannabis as medicine.

Rodriguez predicts that the metropolitan areas of the state will be “sheltered” for some time because there are more dispensaries in those areas. But, he warned, those metropolitan dispensaries will feel the predicted shortages eventually.

Likely unsurprising to anyone who is familiar with Rodriguez, he said state regulators can “shorten the amount of prolonged and protracted pain that’s about ready to be imposed upon first patients, and then second, non-patients,” by allowing producers to grow more cannabis.

“You cannot make it go away overnight,” Rodriguez said. “But every single day that you withhold the opportunity for actual plants to be put in production, will just be longer suffering, longer pain, and an unstable market.”

It’s unlikely the state’s Cannabis Control Division will increase cannabis production limits anytime soon, though. Regulators recently told the Santa Fe New Mexican that there were more than 1 million plants in production, although Rodriguez and others have severe doubts about that number.

Robert Jackson, the director of cannabis producer Seven Point Farms, seems to have a similar view about the role of production limits.

“The supply issue is kind of real,” Jackson told NM Political Report. “But I really, really feel that it was too little too late from the state when they increased the plant limits. But the only people who could take advantage of that, possibly, were established companies. And even then, scaling up that fast was basically impossible unless you already had the production space available.”

Jackson said his company has an advantage in that it only has three retail stores to stock and began as a wholesale-only cannabis producer.

“I know that some of these guys have some very big operations, but they also have many stores,” Jackson said.

Jackson said Seven Point Farms is sitting on a fair amount of reserves that will likely not be released for wholesale until the market demand is more clear. He said his phone “hasn’t stopped ringing” with calls from licensed retail-only operators, who are not licensed to grow cannabis.

But overall, Jackson thinks that any high demands for cannabis will eventually taper off and the market will even out.

Matt Muñoz is the chief innovation and finance officer for cannabis producer Carver Family Farm, which is a cannabis microbusiness that is limited to 200 plants. Larger businesses—or those that are not microbusinesses—can grow up to 20,000 cannabis plants, depending on the license. Muñoz said he is not too worried about widespread shortages trickling down to Carver Family Farm, because the company has a relatively quick turnaround time for getting cannabis to patients and customers.

“Our perpetual harvest cycle kind of gives us that flexibility that we’re always going to have product,” Muñoz said. “If we run out, we’ll have some shortly afterwards.”

Carver Family Farm also sells plant cuttings or clones as a way to help patients grow their own medicine and supplement sales.

But, Muñoz said, he still thinks there’s a cannabis shortage coming and that it will likely impact medical cannabis patients the worst.

Ellie Besançon, the executive director of cannabis production company Red Barn Growers, said the company is selling “at a faster pace” than originally forecasted, but that thanks to early preparation for adult-use sales, Red Barn seems to be “looking good on supply.”

“At this point, I’m still feeling comfortable about what we have in reserves,” Besançon said.

Besançon said her guess is that the demand for recreational-use cannabis will slightly decline in the next several weeks or months before it levels out. But, she said, it’s still too early to say for sure.

“At the end of April, I think will be a good telling point for us, as we sort of collect ourselves from the craziness of this month, opening for rec[reational-use sales], 4/20. We’ll have a better sense of where we are, supply-wise, I think, after this month,” Besançon said.

Dominic Garcia, the vice president of marketing and retail for Schwazze, a national company that recently acquired New Mexico cannabis producer R. Greenleaf, said he’s not worried about any imminent shortages. Garcia said R. Greenleaf has been ramping up production and bolstering supply in anticipation of the new adult-use cannabis market.

“We’re building a whole new facility that’s going to be able to crank out a boatload of flower,” Garcia said. “We were kind of concerned about that late-May to June window of having supply. But what we’ve noticed right now is that this first week hasn’t taken off like we thought it would. So we’re actually feeling pretty good about supply.”

Chad Lozano, a cannabis patient advocate and co-host of NMCannaCast, said he personally hasn’t seen shortages yet, but said things could get bad if there are shortages, particularly of cannabis flower.

“For some people, it’s going to be detrimental if they can’t get the medicine they need, especially flower, because most of the users use flower,” Lozano said.

Lozano said the reason most medical cannabis patients prefer flower is because smoking it provides “immediate relief.” He said he encourages other medical cannabis patients to grow their own cannabis, especially now that anyone 21 years of age or older can grow up to six plants per person or 12 plants per household without a special permit or license.

“You don’t have to worry about going anywhere if you grow for yourself and your self-sustaining,” Lozano said.

Rodriguez said any cannabis producer comparable to Ultra Health in size, that says they’re not worried about a shortage is “being disingenuous” in order to not dissuade potential customers and patients. He said the next “stress test” for how soon his predicticted shortage will happen is Friday, one week from the first day of adult-use sales.

“We’ve got to know if the next seven-day period brings a new trend,” Rodriguez said. “If it brings the average down, then 22 turns into 25 possible days. If it brings it even lower, 25 days may extend up to 28 days. But either way, the shortage is imminent and inevitable.”