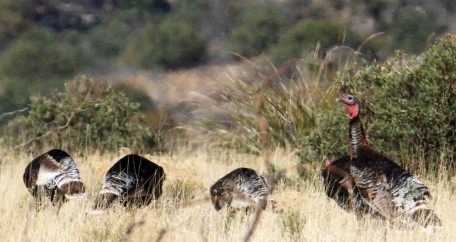 The bird, which is found in the southwest corner of the state, was added to the state’s threatened species list in 1974. It is the largest subspecies of the wild turkey in North America and can be found in northern Mexico as well as parts of Arizona and New Mexico. In New Mexico, it is found in the San Luis, Animas and Peloncillo mountains.

There are five steps that the New Mexico Department of Game and Fish goes through before delisting a species. These include preparation of a delisting investigation report, consideration by a peer review panel, creation of a public repository file for documents and correspondence, notification to interested parties and the public and, finally, a recommendation from the commission.

The Game Commission’s recommendation on Monday opens up a 160-day public comment period that will conclude in September.

The public comment period will include three meetings, including on July 12 in Albuquerque and July 13 in Las Cruces. The date for the third meeting, which will be in Animas, has not yet been scheduled.

“The biggest takeaway from that is the data has informed us about habitat use through site location, and how they move,” he said.

Liley said it also provided information about nesting survival and population dynamics. It also allowed the department to see how the turkeys move across international borders.

The recovery plan developed in 2017 under the state’s Wildlife Conservation Act called for maintaining a population of at least 175 Gould’s turkeys in the Peloncillo range. Liley said the current population—an estimated 250 to 270 birds—exceeds that goal.

When the recovery plan was developed, there was no reliable count of how many Gould’s turkeys were in the wild. This was in part because the turkey’s range in the Animas Mountain range of New Mexico is on private land.

Since 1974, the state has done numerous things to help recover the population, including translocating turkeys from Arizona and Mexico into New Mexico, according to Liley.

The department began exploring removing the turkey from the list in November following intensive field studies that began in 2018. The department also sought peer review from New Mexico’s four-year universities.