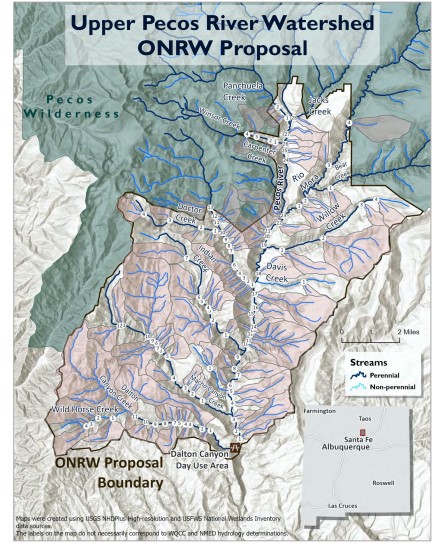 A map included in the petition shows the location of streams in the Upper Pecos watershed.

The Upper Pecos watershed is an important water source and members of the communities that rely on it say that it needs to be protected.

ONRW designations protect against environmental degradation, something that the watershed has experienced in the past.

San Miguel County, the Village of Pecos, the New Mexico Acequia Association, an organic farm in the Pecos area and the Upper Pecos Watershed Association petitioned to have the watershed listed as an ONRW. The petition was first filed in April of 2020, but withdrawn a year later. Then, in October, they filed a new petition. In November, the Water Quality Control Commission granted the petitioners’ request for a hearing, which occurred on Tuesday. Western Environmental Law Center attorneys represented the petitioners during the hearing.

“An outstanding waters designation protects New Mexico’s most exceptional waters, and provides the highest level of protection in the state by prohibiting any new degradation to water quality, while still respecting and allowing the continuation of pre-existing traditional land use activities, such as grazing and safety operations,” Western Environmental Law Center attorney Kelly Nokes said at the start of the hearing.

She said the nominated area of the Upper Pecos watershed supports “one of the most ecologically diverse and significant areas of our state.” This region includes habitat for animals like Rocky Mountain bighorn sheep, the northern leopard frog, the Rio Grande cutthroat trout, the peregrine falcon and the Mexican spotted owl. She said it also provides recreational opportunities.

“This stretch of the Pecos River is the lifeblood of our people and ecosystems that are connected to this special place on our Pecos ancestral homeland is too precious not to conserve for future generations,” he said.

He said the descendants of the Pecos Pueblo continue to visit the sacred shrines in the Upper Pecos watershed.and to perform ceremonies in “the sacred waters of the Pecos River.”

Telesfor “Ted” Benavidez, the mayor of the Village of Pecos, was also one of the witnesses who spoke on Tuesday.

“Ensuring that the waters of the Pecos are protected for the benefits of current, future residents and visitors of Pecos village is vital to the health of our community,” he said.

Benavidez said the river fuels the economy and provides quality of life opportunities for residents.

“The history, the culture, the beauty and the diversity of nominated waters serve as a tremendous backdrop for all that there is to experience here,” said Frank Adelo, president of the Upper Pecos Watershed Association, in his testimony. “Recreational tourism in the nominated area will not only include fishing, camping and hiking but also birding, hiking, nature photography, skiing, snowshoeing, tubing and snowboarding as well.”

The watershed has experienced hardrock mining in the past, which means there are abandoned mines on the landscape. That led to a mine spill in the 1990s, which killed fish at a downstream hatchery. Future hardrock mining is one of six potential threats to water quality that the petitioners identify. Other threats include increased recreational tourism without proper management, climate change, wildfire, development and transportation, and waste disposal.

The New Mexico Farm and Livestock Bureau opposes the designation, citing that some of the proposed waters for protection are located on private property. Tiffany Rivera, the organization’s director of governmental affairs, said during public comment that the designation could lead to restrictions on economic and agricultural activities.

“In a state as dry and arid as New Mexico, continued access and use of our water and land is imperative,” she said.