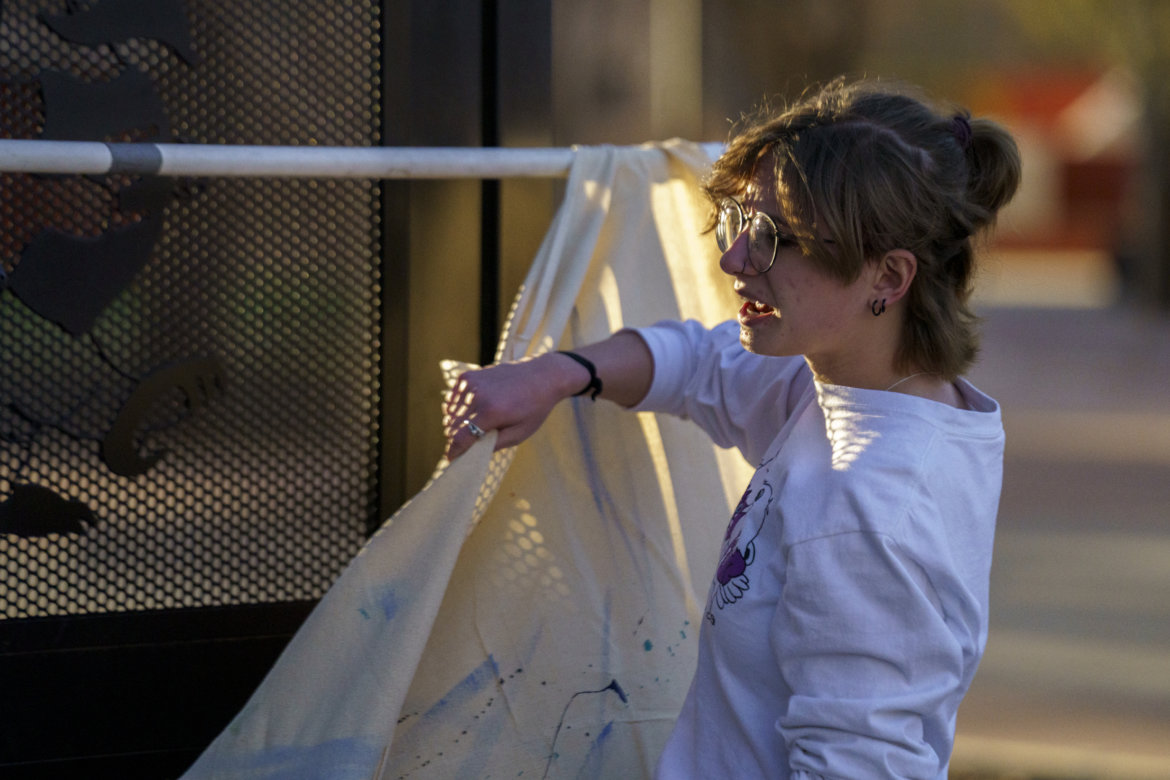 Ash Brotman, a member of the Peer to Peer counseling club, takes down a painted canvas near the club booth during a mental health fair at Eldorado High School on Thursday, April 7, 2022. The fair was open to students and families to check out various organizations, both from the school and outside, that offer mental health aid and also featured a panel discussion about the importance of mental health care in high schools.

For many students in New Mexico, going back to school after months of online learning was a stormy experiment in resocialization. Reuniting with friends and peers brought joy and relief to most, but the process of reentry could also be jarring and chaotic, especially for those who felt the harshest impacts of COVID-19.

How has that played out in the classroom? Violent outbursts and risky behaviors have become increasingly common during the return to in-person schooling, and higher numbers of students are experiencing anxiety and depression, educators report. This mirrors national findings that note an alarming rise in mental health crises among children as young as 5 years old.

This story was originally published by Searchlight New Mexico and is republished with permission.

“For some of these kids, going back to school was a version of culture shock,” said Martin Jones, an educational psychologist at the University of New Mexico, who studies the impact of social bonds on academic motivation.

The loss of a loved one, illness and economic instability can be devastating. Young people, studies show, are not impervious to the stressors that their parents feel, including the emotional turmoil that accompanies joblessness. And for those attending schools with few resources, especially in rural areas, the effects of the pandemic have been especially pronounced.

Teachers have been witness to the students’ turbulent return, observing the rollercoaster of feelings and behaviors, from angst and uncertainty to apathy, defiance and, in some schools, vandalism.

Rebellious gestures were the most visible, including a TikTok challenge that swept even the most remote communities in New Mexico. Starting in the fall, students began posting “devious licks” — vandalizing and stealing school property, from soap dispensers to sinks, and posting the spoils online. So damaged was a bathroom toilet at a school in Shiprock that girls were told they could no longer use it.

Vandalism increased at Eldorado High School, too, along with chronic absenteeism, said teacher Kristin Tomany. Other teachers at the Albuquerque school reported having to help students cope with panic attacks. After months of isolation, a noisy school gym could feel like sensory overload.

Even before the pandemic, New Mexico’s classrooms were stretched thin, and mental and behavioral health resources were hard to come by. Research shows that students’ feelings of sadness and hopelessness have been trending upward for over a decade, with lesbian, gay and bisexual students especially at risk. And physical threats have been a problem: In 2019, around a quarter of New Mexico’s students had been in a fistfight, according to the state’s Youth Risk and Resiliency Survey.

“We were already dealing with stressors this whole time and barely coping,” said Tomany. Young people were facing “rigorous schedules, tons of homework, early start times, sleep deprivation, terrible diets, stress, friend drama” and other struggles, including minor depression, she said. “That was just sitting there undealt with.”

Teachers, too, felt overworked and undervalued before COVID-19. With the pandemic, “the padding is gone and we’re all falling off a cliff.”

According to Jones, the pandemic exacerbated whatever underlying issues a student faced beforehand. “The kids that were already dealing with depression and suicidal ideation, they did get much worse,” he said. “It’s part of the multiplicative and compounding effect of the pandemic.”

Alternately, students who suffered from anxiety before the coronavirus possibly thrived with online classes, where they could work alone and without fear or pressure. For them, going back to school — to social settings that were stressful in the first place — could provoke more anxiety.

For Ash Brotman, a junior at Eldorado (who goes by they/them), attending high school online was “lonely and isolating” because they ended up “losing touch” with many of their friends, they said. But the seclusion also gave them a needed pause to contemplate their sexual identity. Brotman, a member of Eldorado’s Peer 2 Peer, a group of high schoolers working to support other students’ health and well-being, found a new community and eventually came out as nonbinary. Their family was supportive, but they understand that might not have been the case with other young people in similar situations.

The sense of reprieve that Brotman experienced likely felt agonizing for other students who had little choice but to spend more time in the company of a violent or hostile relative while attending virtual classes. Recent findings show that teens were more likely to experience emotional and physical abuse during the pandemic, especially LGBTQI+ youth. For them and others in these circumstances, the result could be a higher risk of homelessness, self-harm, anxiety and depression.

At least some behavioral issues can be attributed to students’ attempts to “reestablish social hierarchies,” Jones said. That could include bullying and acting out. After so much time away, young people are still jockeying for position on the social ladder.

Establishing cause and effect isn’t possible with any certainty, since the pandemic is still ongoing. With so little distance from the eye of the storm, it’s hard to know if schools saw the brunt of the shock this year. What is clear is that students’ experiences of the pandemic varied widely, as did the impacts.

And much like the rest of the population, they are still processing their feelings.