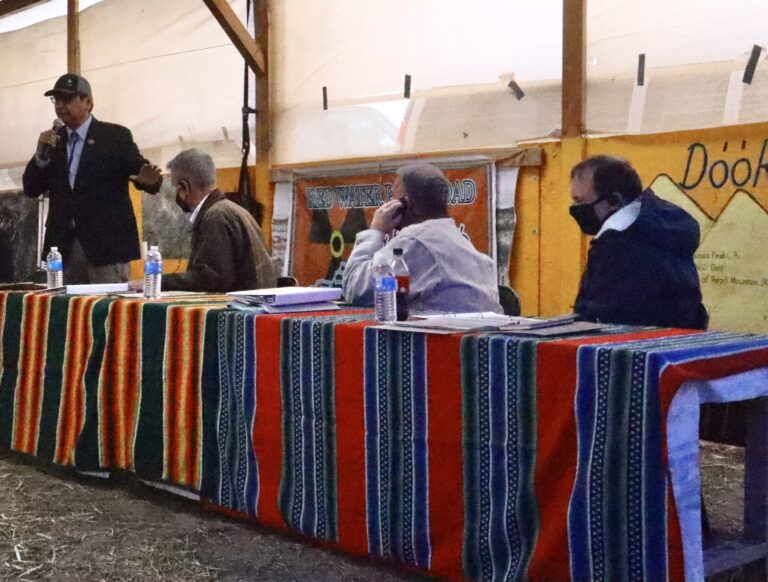 The gale-force winds that swept across New Mexico on Friday, driving fires and evacuations, gave Diné residents in a small western New Mexico community an opportunity to demonstrate first hand the danger they live with every day.

Nuclear Regulatory Commission (NRC) members were in the Red Water Pond Road community, about 20 minutes northeast of Gallup, to hear local input on a controversial plan to clean up a nearby abandoned uranium mine. It was the first visit anyone could recall by NRC commissioners to the Navajo Nation, where the agency regulates four uranium mills. Chairman Christopher Hanson called the visit historic, and the significance was visible with Navajo Nation President Jonathan Nez and other Navajo officials in attendance.

This story originally appeared at New Mexico In Depth and is republished with permission through a Creative Commons license.

As commissioners listened to 20 or so people give testimony over several hours Friday afternoon, high winds battered the plastic sheeting hung on the sides of the Cha’a’oh, or shade house, making it hard for some in the audience of many dozens to hear all that was said.  “This is like this everyday,” community member Annie Benally told commissioners, mentioning the dust being whipped around outside by the wind. “They say it’s clean, it’s ok. But we have more piles back there and you see it blowing this way.”

Benally was referring to piles of contaminated radioactive soil and debris at two adjacent abandoned uranium mines. One mine is near enough to the shade house that its gate is visible. The U.S. Environmental Protection Agency wants to move some of that waste to a mill site regulated by the NRC, where contaminated groundwater is still being cleaned up. To drive north of Church Rock to the Red Water Pond Road community is to appreciate how close that mill site is to the surrounding community. It sits one mile south of the shade house, on private land but right next to a highway driven every day by local residents.

After Friday afternoon’s listening session, the federal commissioners conducted a public meeting in Gallup in the evening where they heard from EPA officials. The NRC is expected to decide in June whether or not to permit the EPA to move the mine debris to the mill.

The swirling dust outside was a consistent theme during the Friday afternoon session as residents described a generational struggle with significant health risks from uranium contamination.

“I’m glad we don’t have air sampling going, because that might scare some people,” said Dariel Yazzie, head of the Navajo Nation EPA Superfund program. Yazzie connected the swirling dust outside to historic uranium exposure experienced by residents.  Prior to running water being made available to them, people used to haul water in open containers, he said. “Guess what? You’re sitting there with a little bit of dust on you. Everything had dust on it. Where does that dust come from? Right behind us.”

Residents described growing up playing in contaminated landscapes, drinking water from mine sites, not told that it was dangerous. Commissioners heard about the worry parents feel about whether their children are safe playing outside. Others implored commissioners to help speed up the cleanup process, which has taken decades, as health impacts like cancer and lung disease, which have stretched across generations, continue.

“This is not right, it brings anger,” said Benally about decades living with the contamination. “I’m 64 years old now, when they first came I was only 12. How long are we going to stay here, and plead and cry.” She urged commissioners to save the dust on them so that when they’re back home they’ll remember.

The multiple hours of testimony concluded with remarks by Nez, who put a point on the message residents were sending: the mining waste should be moved completely outside of their community.

Montgomery said current law only allows the EPA to go so far. It can’t site or create facilities for disposal, or ask a private party to do it either, he said. The agency is working to identify locations on federal land for other mine cleanups, Montgomery said, but for the Church Rock area there are no easy solutions for taking the waste out of Indian country.  Should the NRC not approve the current plan, the agency would be at an “impasse” that would take years to move beyond, he said.

Montgomery suggested that Navajo aspirations to remove all uranium mine waste from their land would be difficult to achieve by the EPA alone. “If the solution for all the mines is to take all the waste off of tribal land, it’s going to require a dialogue that’s possibly outside our authority,” he said.

Montgomery’s answers seemed to confound Baran. “Would EPA proceed with the mill site option if the community it is meant to benefit opposes it?” he asked.

“There are a lot of perspectives within the community,” Montgomery said. “You can’t always get everyone to agree.”

Nez challenged those remarks later in the meeting after Baran asked him if he wanted to respond to any of Montgomery’s comments.

“I’ve heard a hundred percent of my Navajo relatives there say they didn’t want the waste. So I’m just wondering who are these individuals who can’t agree?” he asked.