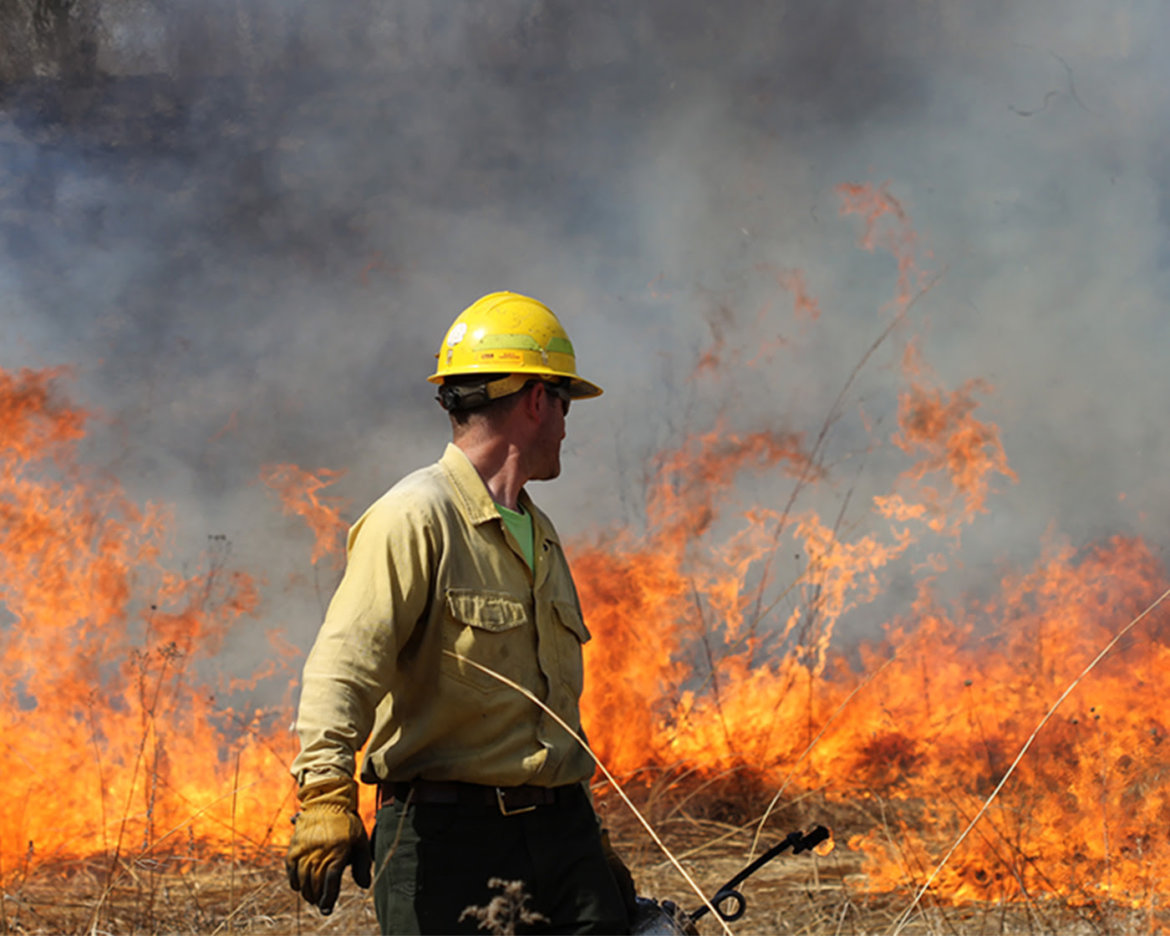 Prescribed burns can be a key weapon in preventing catastrophic wildfire, but finding the right window to burn can be challenging and, with dry conditions, prescribed burning in New Mexico has come to a halt. A modeling effort by Los Alamos National Laboratory scientists aims to provide agencies with a tool to determine when the conditions are best for burning.

Rod Linn, a scientist with Los Alamos who leads the wildfire modeling team, told NM Political Report that various factors are used to determine when it is safe to burn, but conditions can change rapidly.

On Saturday, Gov. Michelle Lujan Grisham said in a briefing that the state is banning fires campfires on stand lands and is asking every local government to think about ways to ban the sales of fireworks. This comes as 20 wildfires were actively burning, as of Saturday afternoon, in 16 counties in New Mexico.

“Half the state has a fire issue,” she said.

She said high winds, dry fuels and low humidity contributed to the fire danger. More than 25,760 acres burned on Friday.

The Hermits Peak Fire that started April 6 near Las Vegas, New Mexico, is an example of a prescribed burn getting out of control. The U.S. Forest Service declined to comment on the Hermits Peak Fire and what led to the multiple spot fires spreading. The Hermits Peak Fire has since joined with the Calf Canyon Fire and, together, they have charred more than 56,000 acres and prompted evacuations in San Miguel and Mora counties. The agency said the fire is still under review.

The Calf Canyon Fire, which has joined with the Hermit’s Peak Fire, is the top concern, according to Lujan Grisham. She said the number of structures the fires have destroyed remains unknown.

The causes of most of the fires in the state, including the Calf Canyon Fire, remain under investigation, Lujan Grisham said.

She acknowledged the importance of prescribed burning and said prescribed fires “are still going to be a tool, they have to be particularly in areas that you can’t get into productively.”

She said she hopes that fire managers will reevaluate when they do prescribed burning and in what areas.

Linn said that for decades the national lab has been studying wildland fire, however, over the last seven or eight years, Los Alamos has begun working closely with various partners, including the Forest Service, to model the behavior of prescribed burns. The model they are working on is known as QUIC-Fire. Work on the software has been going on for several years.

“We recognized that there was a shift in the way that people are thinking about fire and particularly we’re talking about fire in a more proactive way,” Linn said.

Preparing for a prescribed burn

He said methods of manually reducing fuel loads on landscapes, such as cutting trees and removing brush, can be expensive on a per acre basis.

Linn said fire is an unavoidable part of the ecosystem.

“We’re not going to be able to get away from having fire on the landscape,” Linn said. “We as a country have tried to exclude fire from the landscape for over a century.”

He said that efforts to exclude fire have resulted in unhealthy forests, in many cases, and often increases the risk of catastrophic wildfires.

“Fire is a natural ecosystem disturbance that removes dead and down woody material on the forest floor, helps thin dead limbs from lower tree canopies, and reintroduces nutrients back into the soil,” Forest Service Fire Communication Specialist Punky Moore said in an email to NM Political Report.

Moore said that mechanical treatments can remove small trees and underbrush but, most of the time, do not address large logs and fallen trees or the forest litter on the ground.

“Prescribed fire creates a mosaic pattern as it burns through the unit,” Moore said. “Rarely does a prescribed fire burn as intensely as a wildfire under extreme conditions. Because of the less damaging fire effects, prescribed fires will leave patches of unburned landscapes that benefit small mammals, insects, and the predators that rely on them.”

In contrast, she said mechanical clearing generally results in a uniform treatment across the landscape. This can impact the larger animals that rely on forested areas for shelter.
“Mechanical treatments are beneficial and do reduce the wildfire risk; however, they cannot match the benefits that prescribed fire brings to the landscape,” Moore said.

But controlled burns are also complicated and require a lot of evaluation to ensure the conditions are correct, Linn said.

The Forest Service begins planning for prescribed burns years before the first ignitions are lit, according to information Moore provided NM Political Report. This process involves analyzing the landscape for prescribed fire treatments and the effects the burn could have on vegetation, hydrology, threatened and endangered species and humans living nearby. Punky said that the National Environmental Policy Act process occurs prior to prescribed burns.

After the initial analysis is complete, a “finer scale” landscape analysis is done. During this analysis, prescribed fire units are drawn on maps and in spatial geographic information system programs, Moore explained.

“Fire managers take the proposed boundaries and walk the area to document potential hazards, containment features, vegetation composition, fuel loading of dead material on the ground, forest health overall, and much more. Fire managers then adjust boundaries, talk with fellow specialists, and move the concept to a five-year plan,” she wrote in the email.

The five-year plan includes all of the proposed projects that the Forest Service is exploring or planning to implement over the five-year time frame in that area. Moore said that approach helps the fire manager see the big picture and look at how individual prescribed burns might fit together or affect each other to maintain healthy ecosystems. This plan is reviewed on an annual basis and could be adjusted based on priorities, funding or seasonal conditions.

A few years before a prescribed burn is lit, the Forest Service has specialists survey the area. These specialists look for threatened and endangered species and archaeological sites. Moore said the findings of those surveys are incorporated into future prescribed fire plans.

Leading up to the burn, fire managers evaluate a variety of conditions. Moore said there is a prescribed fire plan template that includes 21 elements that must be addressed. Some of these elements include desired weather, fire behavior, communication planning, smoke management and post-treatment monitoring. The preparations also include modeling of expected fire behavior both inside and outside of the unit.

A separate document known as a complexity analysis worksheet is also completed prior to the burn. Moore said this looks at things like preliminary risk and post-plan risk as well as technical difficulty.

After that, another qualified burn boss reviews the prescribed fire plan, including examining each element.

If the reviewer concurs with the plan and determines that it is sound, it can be submitted for final approval. Moore said a Forest Service agency administrator then reviews all parts of the documentation. If that administrator accepts it, the plan is approved and a burn boss is assigned to the project.

She said that burn boss works with the National Weather Service to monitor both long-term and short-term weather conditions leading up to the prescribed burn. Before the project begins, fuel moisture readings are taken. These readings come from both live and dead plants in the planned area.

Linn said few prescribed burns get out of control like the Hermits Peak Fire.

Linn said the model looks at things like ignition methods. He explained that when prescribed fires are lit, they aren’t just lit at a single location. Crews can manage the fire intensity by lighting different points on the landscape.

“One of the biggest things that we’re looking for is to model fire behavior reacting appropriately under different ignition patterns or different conditions,” Linn said.

Linn said this model is not finished and adjustments are still being made, but Los Alamos is pleased with the results that it is seeing when the model has been used in places like California.

As the western United States faces drought and aridification, the time period when prescribed burns can safely take place is changing, Linn said. He said the window of time when land managers can burn may change from one year to the next depending on things like differences in snow pack.

Additionally, Los Alamos has partnered with the U.S. Geological Survey to produce computer models to predict how wildfires will behave in different scenarios. This partnership became official this month with the signing of a memorandum of understanding last week.

A press release announcing the MOU stated that the models help managers plan prescribed fires, including when and where they should be lit. The models also help the land managers understand and forecast the direction that a fire will move and its intensity.

The press release states that the current fire models have limitations.

“This partnership leverages USGS expertise in 3D mapping of terrain and vegetation to support the application of the Los Alamos National Laboratory suite of advanced fire-modeling tools and will provide science support to both research communities and fire managers, who will increasingly rely on more sophisticated understanding of fire behavior to confront novel fire behavior under a changing climate,” USGS Associate Director for Ecosystems Anne Kinsinger said in a press release.