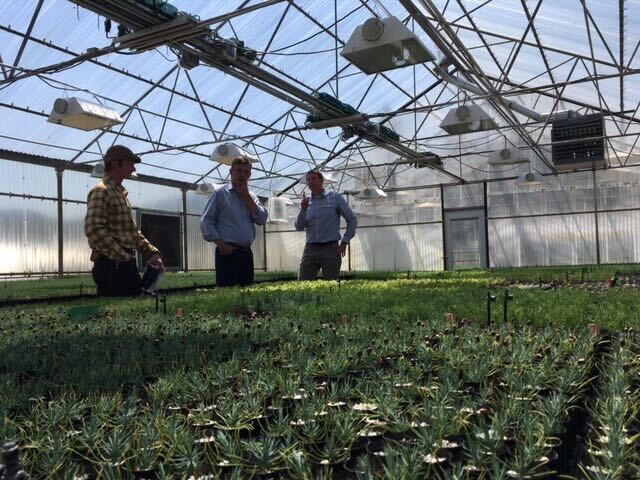 U.S. Sen. Martin Heinrich, D-NM, tours the John T. Harrington Forest Research Center on April 20. The center has since been evacuated due to wildfire.

As fires char tens of thousands of acres of land in New Mexico, the very place tasked with growing seedlings to reforest is now facing the threat of wildfire.

New Mexico State University’s John T. Harrington Forest Research Center, located in Mora, was evacuated this week. Owen Burney, the center’s director, said the staff was able to save the seed library, but thousands of seedlings currently growing in greenhouses are at risk. By grabbing the seeds, the staff ensured that a new nursery could be started somewhere else if needed. Burney said this means that even if the facility is destroyed, there will be seeds to plant at a planned reforestation center that could be developed in the future.

These seedlings could perish even if the fire doesn’t reach the greenhouse. He said if the power is out for extended periods of time or if they aren’t able to water the plants, the seedlings could die.

Burney said the future state reforestation center should be located in an area that is less likely to experience large wildfires and it should have backup generators to prevent seedling die off should the electricity go out.

The research center grows seedlings to replace trees destroyed by wildfires in southwestern states, with the capacity of producing 300,000 seedlings annually. Burney said the seedlings in the greenhouse would have been planted this year.

Two large fires are burning in Mora County. One of these is the Calf Canyon Fire, which merged with the Hermit’s Peak Fire. Together it has charred more than 60,000 acres as of Tuesday morning and is burning in a mixed conifer forest. The other fire is the Cooks Peak Fire, which has burned more than 54,000 acres as of Tuesday. The Cooks Peak Fire is burning in ponderosa pines, oaks, brush and grass. Both fires have led to evacuations in Mora and neighboring counties.

Fires can burn for months, and work on reforestation can only begin once they are extinguished. This starts with an assessment. Not every acre of charred forest needs to be replanted, Burney said. Some areas have surviving vegetation and seeds. But, when fires burn intensely and destroy everything in their path, new seedlings grown at the forest research center are needed.

The 300,000 seedlings that can currently be grown aren’t enough to meet the demand. Burney said this would only reforest about 2,000 acres. Just between the Calf Canyon Fire and the Cooks Peak Fire, Burney said more than 100,000 acres have been charred.

Burney said the landowners’ objectives also influence whether an area is prioritized.

As the climate changes, Burney said they also evaluate what seedlings should be planted. That could mean that seedlings grown from seeds collected in areas south of where the fire occurred may be planted.

Forests play an important role in watershed health, both in terms of water quality and quantity, Burney said. They can also sequester carbon. However, poor forest management in the past has made it more likely that fires will occur.

“Fire is very common and it occurs frequently and we just removed that from our system,” he said about past management practices.

In Ponderosa forests, which are common in the southwest, fire historically occurs at regular intervals, Burney said. He said that fire interval can be anywhere from three to eight years.

“We’ll continue to see these catastrophic fires until we can get our management up to speed,” he said.

When a catastrophic fire does occur, the carbon that would otherwise have been sequestered is released into the atmosphere and water supplies that people rely on are threatened.

“If we don’t make the changes now at a scale that is massive on the management of these forests before the fire comes in and after the fire does come through, we’re going to have a problem that is going to affect air quality, water quality and overall just human life,” Burney said.

“We’re losing the window to make that change,” he said.