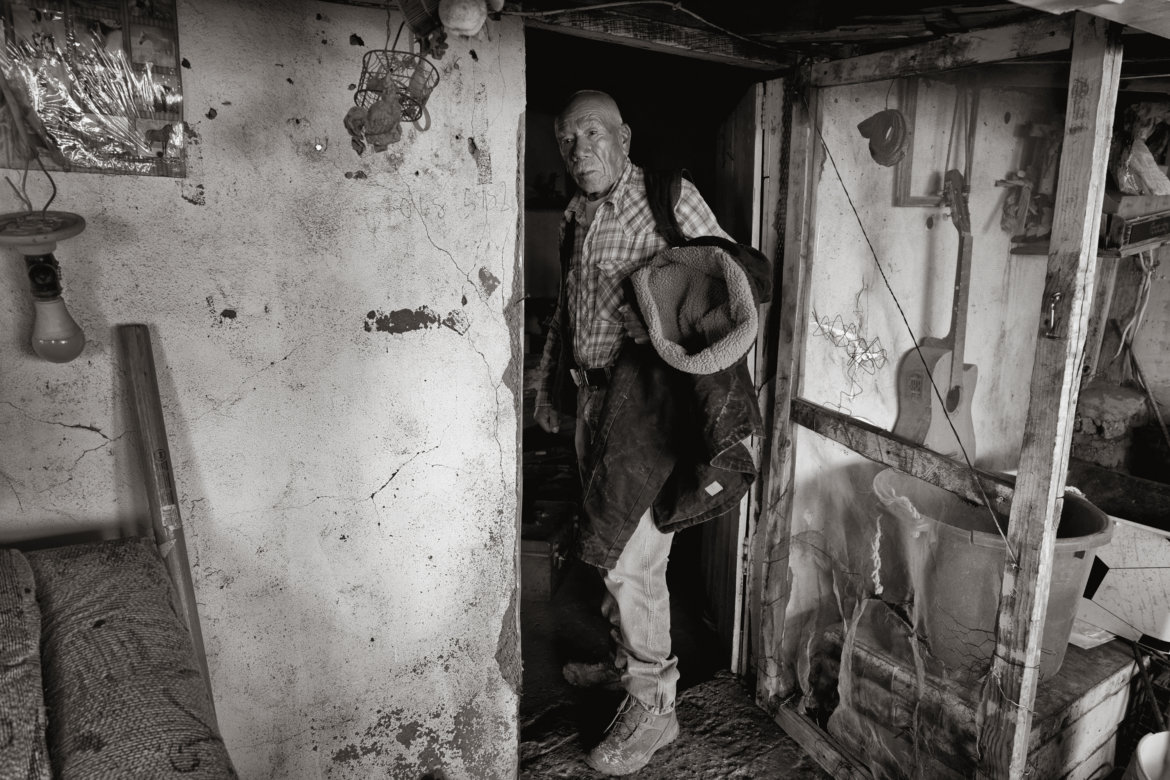 Fidel Pérez made his way from Durango, Mexico, to Juárez and then to Chaparral, New Mexico, in 1970. He was cleaning yards and working in the agricultural fields of nearby Anthony when border patrol officials arrested him. When they asked why he had come to the United States, he replied, “Because I’m hungry! And it’s easier here to make money for tortillas than it is back in Mexico.”

Later, after he’d married an American, he returned to Chaparral. It was one of many informal communities known as colonias, a word that, in the Southwest borderlands, connotes just the kind of place where he’d landed: a rural unincorporated settlement populated almost entirely by Mexican immigrants and lacking such amenities as paved roads, electricity, water systems, wastewater treatment and decent housing.

This story is the work of Searchlight New Mexico and is republished with permission.

Pérez is one of the thousands of laborers who’ve traveled north of the border in search of work. Squeezed out of established housing markets by price — and by overt racism — these low-wage workers have sought new places to settle. Landowners and real estate developers in New Mexico, seeing an opportunity, have found ways to offer what the newcomers wanted: cheap land. And the lax laws outside of established municipalities allowed landowners to subdivide property without providing basic infrastructure.

The resulting small, poorly designed subdivisions started as little more than clusters of makeshift houses and mobile homes — often with only a few dozen residents. They grew rapidly, offering people like Pérez the possibility of land and homeownership. Hundreds of colonias soon sprang up along the Mexican border from Texas to California, and today there are more than 2,000 of them. In New Mexico alone, there are more than 140 colonias, home to some 135,000 people.

Lots were often sold using unscrupulous contract-for-deed arrangements and other predatory lending practices. Buyers — who often didn’t speak or read or write in English — had to navigate through loosely regulated real estate contracts in a legal system they may not have understood well. A purchase often left them without a legal title for their small, unimproved lots of land without electricity, gas, a sewage system or indoor plumbing. Some buyers wound up locked into a cycle of debt that exacerbated their poverty.

Appalling conditions in New Mexico colonias prompted local and regional governments to reckon with them in the 1990s. The state attorney general attempted a crackdown and subdivision laws were amended to close loopholes, but by then the colonias were well established.

Today, it’s easy to drive right by a colonia and not even see it. In New Mexico, they are typically situated between towns within a couple hours’ drive of the border — the majority within striking distance of the Interstate 10 and Interstate 25 corridors and smaller feeder roads. Amid the rush of semis bouncing between urban centers, commuter cars carry laborers from the colonias to their jobs in farm fields, factories and service industries in El Paso and around Las Cruces.

Immigrants chasing home ownership can still find relatively inexpensive land in the colonias. Infrastructure has improved for the most part, thanks to local activism and government and nonprofit programs. A few colonias have incorporated and grown to include a few thousand or more residents. Some have gained a measure of status as bona fide towns. But despite their ubiquity and the large numbers of people who live in them, they remain largely invisible to most New Mexicans. I traveled to southern New Mexico this year to bring them into view.

This street sign in Chaparral marks a barely passable dirt road in an area of unoccupied housing lots. Chaparral, which has schools, a fire department, some paved roads, limited utilities and 15,000 residents, is the largest of the 141 colonias recognized in New Mexico. Yet it still has the ragged character of an undeveloped settlement.

A tattered billboard in Chaparral advertises cheap lots for sale. Colonias are defined by the U.S. Department of Housing and Urban Development as rural communities within 150 miles of the U.S.-Mexico border that lack adequate water, sewer systems or decent housing.

Voices from the colonias

Cecilio Salinas in front of his trailer home in Las Palmeras, a colonia near Anthony, N.M.

“I’ve lived here in Palmeras, maybe about two months. But I’ve been here in the States for a good long while. Like 25 years. I come from Mexico, from Delicias, Chihuahua.

“My woman, she is working now, in Anthony. She is from Coahuila. We are renting here. My landlord was very cool. He was Mexican. He owned all of this, and he just died. Now the one who is in charge is his son-in-law. He’s very good, too. He’s charging me cheap — $175 per month.”

Marisela López outside her home in Las Palmeras

“Well, I lived in El Paso, but I am Mexican, from Juárez. And that man next door, he’s from Juárez, too. I am originally from Meoqui, in the state of Chihuahua, but I was actually born in Delicias, Chihuahua. I’ve been living here 10 years.

“A gentleman sold us this property, but it was a fraud. We paid $18,000, and that was because it was a friend of that man and he sold it to him, and now he doesn’t want to give us our money, and he wants to throw us out of here. But he doesn’t have the title. And now we’re not paying rent. We’re just here. We don’t give him any more money.”

Pérez, in his kitchen, shows his green card, which he keeps handy in his wallet. After 52 years in the United States, he owns three rental units in addition to his own home.

Pérez in his bedroom

Bryant Chacón shows off his tattoos in front of his home in Chaparral.

“I’ve lived here almost five months. I was working in El Paso at a tattoo shop and studying to become a professional tattoo artist. But the transportation into town was an issue. So I couldn’t add to my education. I’m from El Paso originally. My parents ended up moving here when I was like, 10. And now I’m 29. I live here in this place, part trailer and part house. And all the way in the back of this property is my neighbor. And then over there, all the way in the back over there, there’s another neighbor. This neighborhood is pretty crowded, but everybody gets along. It’s pretty chill here. There are a lot of Mexicans here. I was born here in the U.S. I guess you would call me, like, a Chicano.”

Celia Rey by her home in Las Palmeras — one of the few houses in the community of trailer homes.

“I am from Jiménez, Chihuahua. I’ve lived here about 10 years. … There is not much crime here. It is very quiet. Very nice here. Very comfortable because nobody messes with us.

Celia and her neighbor, Francisco Gutierrez

“I’ve been here 20 years. In this trailer. I am from Guadalajara. And I came here to work. And I lasted 12 years working, and then I got sick with epilepsy. And then I broke my leg. I didn’t feel good anymore. I am disabled. I’m here in the chair, or just in bed. Due to epileptic seizures and high blood pressure.

“Once I was about to get married, but my woman cheated on me with a friend. There in Mexico. And I was traumatized. The trauma has gone away a bit. But I’m afraid of falling in love. Because they say that people here, the women just want papers. And I have papers.

Improvised electrical wiring that supplies power to Fuentes’ home is emblematic of the poor infrastructure in colonias.

Miguel Diáz in front of his home in Milagro

“I came to the U.S. 15 years ago and we have lived here in Milagro for 12 years. I come from Guanajuato, Mexico. Far away, by car, almost 24 hours. My father arranged papers for us. He lives in Hatch. We have resident status. And I started to work the moment that I arrived. I worked in the fields, or in the dairy. There are a lot of dairies here. And there’s lots of work in the fields here. Onions, chili.

“This colonia was really small. Maybe just 12 houses here. Way back then the road was just rough dirt, there was no drainage, and now there’s a good road that drains, and there are more houses. We have potable water, but no natural gas. Just propane. And yes, we have electricity.

“It’s very quiet, peaceful. Relaxing. I come from work, get up on that chair, sleep really well on the trampoline. No problems, no nothing. When I married my wife, I wanted a house, a home in Hatch, but it’s very expensive there. So, I saw this house trailer, already here on this land, and a man told me, ‘Hey, do you want to buy my land?’ And in those years the price was good, it was a whole lot to buy here. ‘Give me this much,’ he said. ‘OK.’ And I paid every month, and now it’s paid off — thanks to God.”

A trailer home in Milagro

Enrique Garcia in the Berino Mini Mart, north of Anthony. He started the business in 1990.

“I was born in Chihuahua, Mexico, in a little town called Los Garcias, near Meoqui. My mother was born in the U.S., and that’s how we were able to arrange our resident status. She’s Mexican, but she was born in Pomona, Calif. She married my father and they moved to Mexico. They had all their children there, nine in all. And none of us are left in Mexico — we all moved here — my parents, too.

“When we first arrived here, in 1974, we came to La Union, near Anthony, and we worked on farms. Then I worked for nine years in Amarillo, Texas, in the slaughterhouses. And then I found this valley, and I liked it — the climate and the people. It’s really peaceful here.”

“I was born in El Paso and I grew up in Chihuahua, Mexico. I have citizenship, and so do my kids, who were born here, too, in Las Cruces. I came to the U.S. six years ago, for my kids and the schools. I have three kids, 14, 11 and 9. I drive every day to El Paso, 20 miles, to take them to school. … We have been living here in La Mesa for three years. And thank God everything’s OK, so far so good.

“My husband works. Somebody has to work! We’re a team: He works, and I’m in charge of the kids. He works with livestock, for a company in Del Rio, Texas. It’s seven hours from here. He works with cattle that come across the border. Around 300,000 head cross the border and they’re taken in trucks to feedlots. He comes home on weekends.

“We have a very good life here. We bought this trailer, and the land, and everything is paid off, thanks to my husband. I travel to Texas for the schools, because they’re better there. But we’re very lucky. We’re very happy here. We’re going to stay here.”