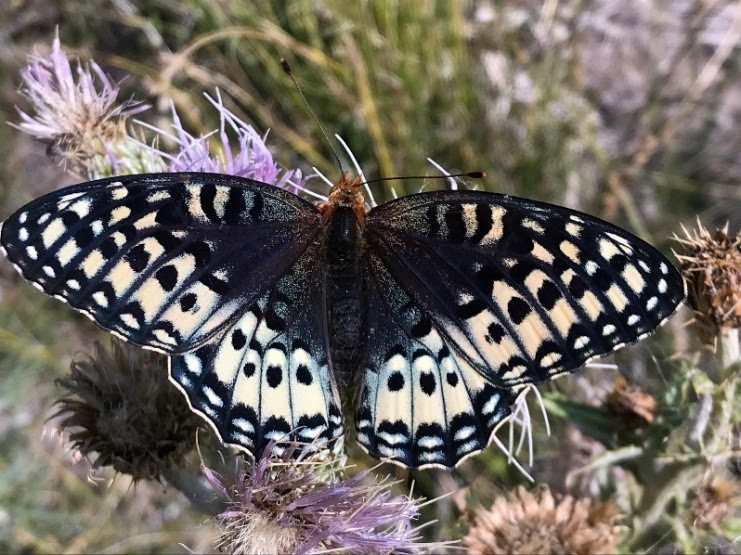 A female silverspot butterfly is pictured

A butterfly found in northern New Mexico could soon be added to the list of threatened species under the Endangered Species Act.

The U.S. Fish and Wildlife Service announced on Tuesday that it is considering listing a subspecies of the silverspot butterfly, which is found in high elevation areas ranging from 5,200 to 8,300 feet above sea level in parts of Colorado, Utah and New Mexico, as threatened. This follows the completion of a peer-reviewed species status assessment report.

This is one of five subspecies of the silverspot butterfly and there are only ten known populations of this subspecies. The scientific name is Speyeria nokomis nokomis. It’s a large butterfly known for the spots on the underside of its wings, from which its name is derived. The top of the females’ wings has patches of cream or light-yellow color as well as a brown or black base while the top of the males’ wings is bright orange.

According to a press release, the butterfly is not “in immediate danger of extinction,” but scientific evidence indicates that it could face extinction “in the foreseeable future.”

The butterfly’s preferred habitat is high-altitude meadows that are relatively open and have a variety of vegetation. It lays its eggs on or near a plant known as bog violet, which is the sole food source for the caterpillars.

In New Mexico, it has been found in Coyote Creek in the Sangre de Cristo Mountains in San Miguel and Mora counties. There are also two known colonies in the Taos area, approximately 16 miles apart from each other.

The Taos population is considered to be highly resilient but the butterflies in the Coyote Creek area have very low resiliency.

Threats like overgrazing and human alteration of the hydrology are now impacting the meadows that the butterfly relies on and these meadows are already intermittent, leading to genetic isolation.

Human development has already destroyed some of the sites where the butterfly was found in the past. The species assessment mentions a golf course and nearby home development that was built in 1987 north of Durango, Colorado, that eliminated the habitat for the butterfly in that area.

Invasive plant species could also threaten the butterfly’s habitat. In the Taos area, Siberian elms have encroached on the meadows.

In 2013, WildEarth Guardians petitioned the Fish and Wildlife Service to list this subspecies of the silverspot butterfly as threatened or endangered.

The species assessment looked at the impacts that climate change will have on the butterfly and found that under more severe models the butterfly could lose its vital habitat.

“Although S. n. nokomis has survived through severe and sustained drought over past millennia, future habitat conditions may preclude its survival,” the authors wrote in the assessment.

Later on, the authors write that the butterfly had a greater ability to survive the droughts in the past because there was less human influence on the hydrology and landscape.

The U.S. Fish and Wildlife Service has not proposed any critical habitat and the press release said the threat of illegal collection and specimen trade led to that decision.

A 60-day public comment period will end on July 5 and the proposed rule will be published this week in the Federal Register.