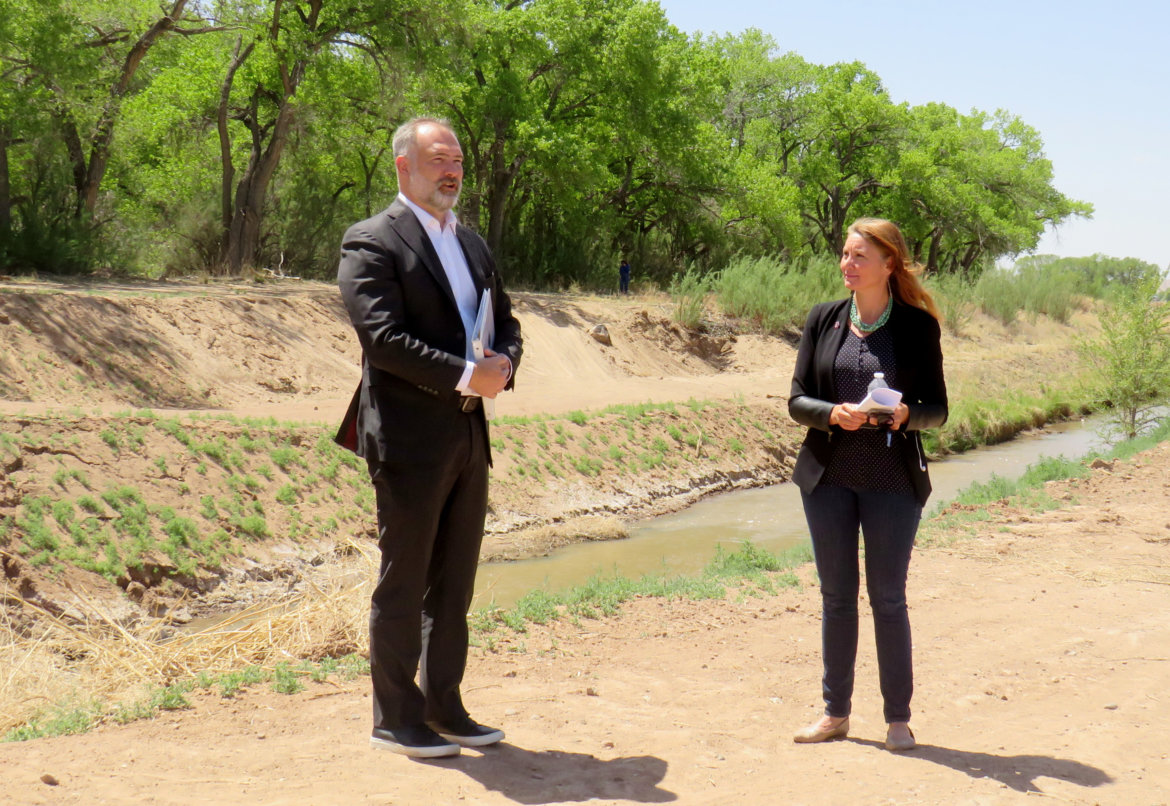 Deputy Interior Secretary Tommy Beaudreau and U.S. Rep. Melanie Stansbury stand beside the New Belen Wasteway on May 4, 2022 in Belen.

The New Belen Wasteway is an example of how infrastructure funding can accomplish the shared goals of resiliency and protecting water for both people and the ecosystem, Deputy Secretary of the Interior Tommy Beaudreau said during a tour of the facility this week in Belen.

The New Belen Wasteway is located at the intersection of several canals and allows water managers to better regulate the flow of water for irrigation as well as returning water to the Rio Grande to meet the needs of the endangered silvery minnow.

Beaudreau and U.S. Rep. Melanie Stansbury, a Democrat representing New Mexico’s 1st Congressional District, visited the site on Wednesday and spoke about funding for water projects that is now available through the infrastructure package President Joe Biden signed in November.

They met with officials from various groups including the U.S. Bureau of Reclamation and the Middle Rio Grande Conservancy District.

The New Belen Wasteway helps in an effort to rebalance the three sides. It replaces old infrastructure with a new facility that returns water to the river, benefits irrigators and helps meet the commitments made to protect the silvery minnow.

Stansbury, a self-described water nerd, said the conversations they had on Wednesday are different from what would have been discussed ten years ago because of a paradigm shift in water management.

“There’s a generational shift in water management happening that’s been going on for several decades, that recognizes rivers as whole systems,” she said.

She said that shift includes looking at how infrastructure is managed at scale to benefit communities, towns and tribes as well as to keep rivers healthy and meet the needs of wildlife and fish, as well as ensuring the rivers are there for generations to come.

Stansbury said that translates into policy work and on-the-ground work in the way that agencies like the U.S. Bureau of Reclamation “deploy money, how they operate these systems at scale, and how they partner on the ground with local partners, because our communities really have the best solutions. And for far too long, we weren’t empowering our communities to actually deploy those solutions on the ground.”

The New Belen Wasteway is an example of the community coming up with a solution to meet the needs. The MRGCD entered into a partnership with the Bureau of Reclamation and the National Fish and Wildlife Foundation, a non-profit group, in 2018 in an effort to improve the response to drought.

This partnership led to the New Belen Wasteway, which is located in a strategic location that allows return flows to the Rio Grande in the Isleta Reach. Naturally-occurring flows in the Isleta Reach are not enough to prevent the river from going dry, which impacts the fish.

Casuga told the congresswoman and deputy interior secretary that the MRGCD designed the plans for the wasteway in house before sending it out to bid. The bid was awarded to Wilson & Co., Inc., a locally-owned company.

Beaudreau said that it is important for the solutions to come from the communities rather than from federal organizations. He said going to see the MRGDC didn’t expect or wait for a plan from the Department of Interior. Instead, they requested funds to help support this work. He said this reinforces “that these solutions for these communities really do come from the ground up rather than from Washington, D.C. and that’s how to make it work the best.”

Casuga said as the climate changes, leading to less water in the upper basins, infrastructure changes are needed to meet those challenges.

But, he said later in the tour, that addressing the new challenges doesn’t always mean building new infrastructure. He said in some instances, uses of existing infrastructure can be reimagined.

Investments in water infrastructure are crucial amid a changing climate, Stansbury said.

“New Mexico is currently ground zero for wildfires, we have the largest wildfires in the nation raging across the state right now,” Stansbury said. “And it is really a symptom of climate change. We are experiencing the worst drought in a millennium, which is really the signature of climate change, which is impacting the ability of our ecosystems to respond to both human and natural things that are happening with drying and fire. And these fires, of course, are being exacerbated by that extreme drought. And that is why it’s so crucial that we use the infrastructure dollars that are coming through the bipartisan infrastructure law, and all of the various funding that has been allocated by Congress and by President Biden to help build structures like this structure we’re seeing here today.”

She said the U.S. Bureau of Reclamation has been allocated $8.3 billion “to address the water crisis across the West.”

“This is the largest single influx of funding for drought resilience that our nation has seen,” Stansbury said.

At the same time, she said the funding that has been allocated only begins to scratch the surface. Stansbury said a massive investment in infrastructure, coupled with a coordinated approach, is needed.

Beaudreau said investments are being made “through tried and  true programs that will help safeguard local water supplies, support efficiency, and rebuild infrastructure and support wildlife conservation just as this project here does.”

He gave examples of projects like the Eastern New Mexico Rural Water System, which has been allocated $160 million. This project involves building a pipeline to transport water from Ute Reservoir to communities like Clovis.

“Our shared priority is to build resilient communities and protect our water supplies for people and for the natural environment,” he said.