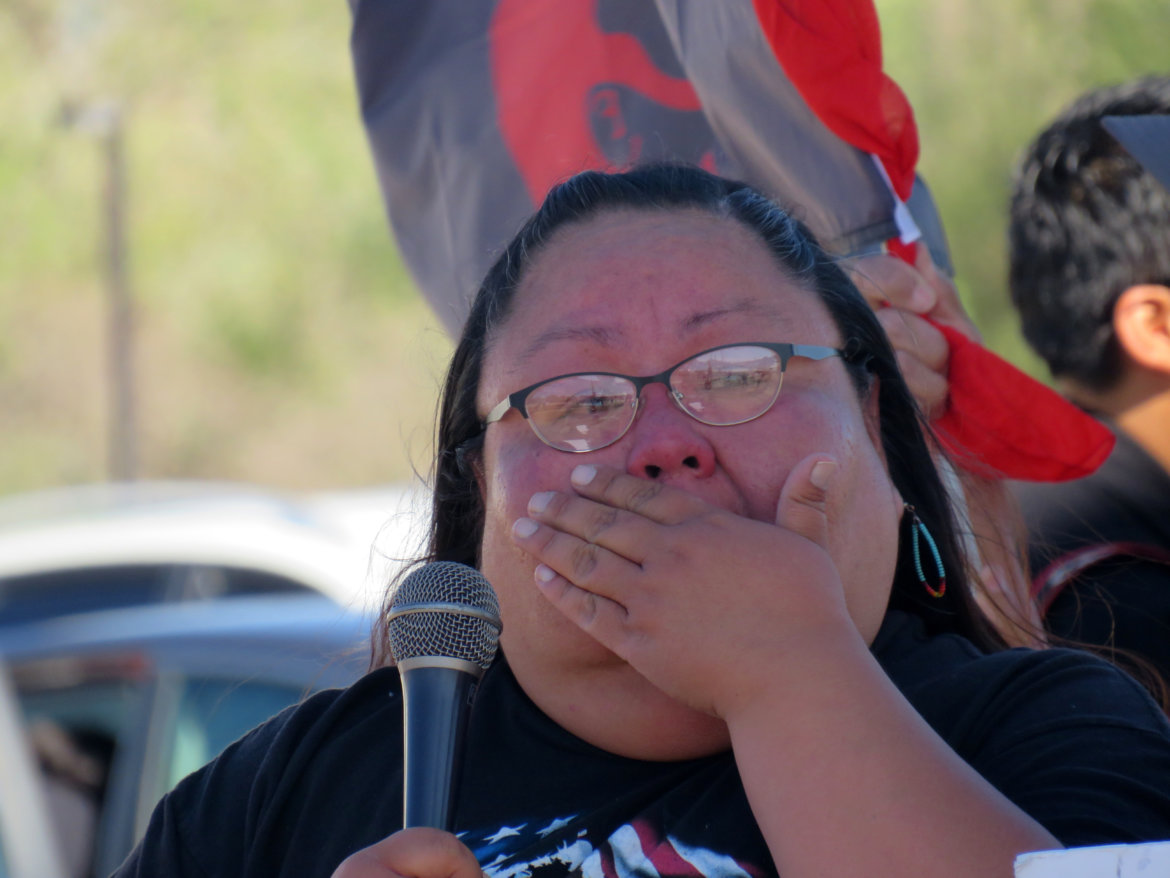 Becky Martinez wipes away tears, Thursday, May 5, 2022, while talking about her brother, Calvin Martinez, who went missing about three years ago.

Rose Yazzie last spoke to her daughter, Ranelle Rose Bennett, in June of last year. They were talking about a birthday party for Bennett’s daughter, Yazzie’s granddaughter.

Yazzie recalls that her daughter hugged her for longer than usual. Looking back, she wonders if she missed the signs that something was wrong.

She hasn’t seen or heard from her daughter since, and Yazzie is frustrated with the lack of attention the police have given the case.

Bennett, Diné, is one of an unknown number of missing or murdered Indigenous people in New Mexico whose case remains unsolved.

Yazzie attended a rally on Thursday in Farmington to raise awareness about the number of Native Americans who are missing or murdered. This rally took place on the National Day of Awareness for Missing and Murdered Indigenous Women and Girls and on what would have been Zachariah Juwaun Shorty’s 25th birthday. He was murdered in July 2020.

His mother, Evangeline “Vangie” Randall-Shorty, Diné, was one of the organizers as she seeks information about her son’s death and who killed him.

She said she wants her son’s murderer caught and she wants to sit in the courtroom as the killer is sentenced.

“He was a fun-loving person,” she said about her son. “He wasn’t done because life was just beginning. He had a beautiful daughter who he loved very much. I love him. He loved me. I have no hesitation in expressing that.”

The group of primarily Native American families gathered on the side of San Juan Boulevard in Farmington outside of Berg Park and next to a billboard that, at times, displays information about two Native Americans who were killed and whose cases have not been solved. Shorty is one of those two people. Paying for that billboard took a concerted fundraising effort.

A woman with a megaphone called out “Justice for” and another person responded by shouting the name of a Native American who has gone missing or has been murdered.

“Many have incomplete investigative work with next to no victim advocacy; they have no answers on where the status of their case is,” Balderas said.

He also said he was implementing SB 12, which mandates the Attorney General’s office to create the position of a missing Indigenous person specialist.

But he said the bill was “not good enough and not strong enough.”

Balderas spoke of the jurisdictional issues that also plague missing and murdered Indigenous individuals which advocates have called a crisis.

Randall-Shorty said during Balderas’ press conference that her family had put up a $10,000 reward to help find the person responsible for her son’s death.

“There is a $10,000 reward that comes out of our pockets. We don’t have the resources and that’s what we need,” she said.

The epidemic of violence that Indigneous people face led to the state releasing a response plan on Thursday.

“It is critical that we use every available tool to deliver critical resources to the loved ones of missing Indigenous women and relatives across New Mexico, bringing more awareness and public attention to these important cases and ensuring their families have the support they deserve,” Gov. Michelle Lujan Grisham said in a press release Thursday announcing the response plan.

New Mexico has the highest number of missing and murdered Native Americans in the country and two cities—Albuquerque and Gallup—are reported to have had more Native American women and girls go missing or be murdered in a five-year time frame than nearly 70 other urban centers in the United States, according to the introduction in the newly-released response plan.

The response plan calls for increasing support services to help people who are in crisis, developing community outreach programs as well as education and prevention strategies, developing resources so that when someone goes missing there can be a strong response, and building capacity within current systems, including the judicial system.

It also calls for creation of a memorandum of understanding between law enforcement agencies to facilitate better communication, including sharing of information, and establishing a MMIWR office that has a team tasked with investigating cold cases.

For Darlene Gomez, an attorney, these stories are all too familiar. Gomez has a dozen clients she represents who have missing or murdered relatives. She said she started on that path in 2001 after Betty Lee, Diné, was murdered. Gomez was an intern at the time. Robert Fry, a Farmington resident, was ultimately convicted and given the death sentence. He has also been convicted of several other murders. Fry is one of three New Mexicans on death row, having been sentenced prior to the state banning capital punishment.

Later one of Gomez’ friends, Melissa Montoya, would go missing. She remains missing to this date.

Gomez was part of the task force that worked to compile a state’s response plan that was released on Thursday. She described it as a good first step.

“This is not just a Native American problem,” she said during a speech at the rally. “This is a U.S. problem.”

She said race plays a role in the crimes remaining unsolved for years. Not all of her clients have been Native American. Gomez said when a white person went missing and she represented the white person’s family, there was greater attention from the media and the body was quickly found.

Some people at the rally mentioned the nationwide search that ensued when Gabby Petito, a white woman who was blogging about van life while traveling with her fiance, went missing. It didn’t take long for her body to be found. If that type of attention was given to the Native Americans who have gone missing, perhaps their cases could be solved as well, some people said.

Yazzie said if there had been that kind of response to her daughter’s disappearance, perhaps Bennett would already have been found.

“I want people to know that these individuals murdered Indigenous men and women, they are you and they are me and their lives matter just like anyone else’s lives,” Gomez said. “They have mothers, they have siblings, they have children and no one is put on this earth to be killed.”

Having the day in court where they can face the person who killed their loved one is important to the families, Gomez said.

But it doesn’t fix everything, as Heaven Howland, Jicarilla Apache, pointed out. Howland’s brother, Travis Howland, was abducted, tortured and killed by their cousins. Their cousins were found guilty after a lengthy judicial process.

“Even though they catch the killers, your loved one is still gone,” Howland said during a short speech she gave at the rally.

Susan Dunlap contributed to this report.