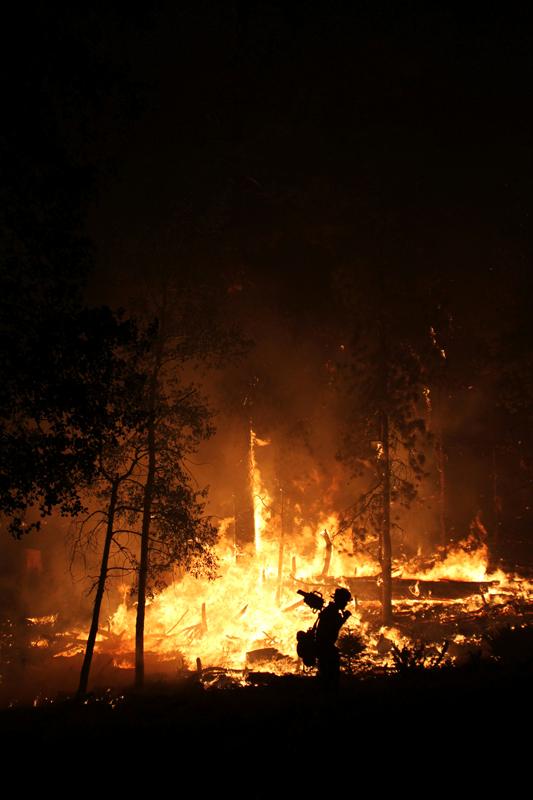 After an update about the Black Fire in southern New Mexico and efforts to fight it, a woman attending a community meeting in Truth or Consequences on Thursday asked for information about what it is like to be evacuated, telling the officials that she’d never faced an evacuation before.

Thousands of New Mexicans have been forced to leave their homes as wildfires char hundreds of thousands of acres across the state. Hundreds of structures are known to have been lost this year to wildfires in New Mexico.

With fires likely to increase under climate change scenarios, new policies may be needed and researchers with Resources for the Future say these policies may need to take into account the demographics of areas with higher levels of fire hazards.

The Black Fire—which is close to 200,000 acres—ignited on April 13 and has since grown to be the third largest in state history. It is burning at the same time that the largest wildfire the state has seen—the Hermits Peak/Calf Canyon Fire—continues to burn.

A 2018 study found that the number of homes located in areas with high levels of fire hazards increased by more than 40 percent between 1990 and 2010.

A new study published this month in the journal Environmental Research Letters that focused on the demographics of the people living in those areas with high risk of wildfires in the western United States cited the 2018 study. The new study was conducted by researchers from the group Resources for the Future. Matthew Wibbenmeyer, a fellow at Resources for the Future, was the lead author.

Wibbenmeyer and his teammate, Molly Robertson, found that homes with a market value in the top 10 percent were 70 percent more likely to be located in areas with high levels of fire hazards. What that means is that areas with higher fire risk tend to also have wealthier residents.

But that is not always the case. The paper also found that vulnerable populations such as very low-income families, Native Americans and the elderly are also disproportionately represented among those living in the high fire risk areas. Those populations, the paper states, may be less resilient and able to recover after a wildfire burns through their area. This is because of less household wealth, insurance coverage, less access to credit or poor health.

“Though exposure to wildfire hazard falls disproportionately on higher income households with higher property values, vulnerability—susceptibility to damage or loss in the case of a wildfire event—may be distributed differently,” the study states.

But, in many parts of the western United States, the areas are less densely populated and less likely to have wealthy homeowners living there.

Many of the counties in New Mexico currently experiencing wildfires have large populations of people living in poverty, according to U.S. Census data.

Wibbenmeyer said he began researching the demographics of those living in fire-prone areas a few years ago following questions from a media outlet.

The study results lead to questions about what policies should be in place for people living in areas that are known to have a large amount of fire hazards. He said there are things that can be done to reduce wildfire hazards such as thinning of forests and prescribed burning. But all of those things have costs associated with them.

“One of the implications of this paper is that some of these households that are in high fire hazard areas should probably be bearing some more of the cost,” he said.

At the same time, he said the caveat to that is that “it’s certainly not universally the case of higher-income households living in high fire hazard areas.”

Wibbenmeyer said he is now working on a study that looks at how wildfire hazards impact people’s decisions about where they live. He said his current study is looking at how the increasing costs related to living in fire-prone areas—such as rising insurance premiums—is changing who decides to live in places like forests and mountains.

Meanwhile, as fires continue to destroy property and force people from their homes, U.S. Senators Martin Heinrich and Ben Ray Luján, Democrats from New Mexico, and Alex Padilla, a Democrat from California, have introduced legislation that would allow states and local governments to use the federal Fire Management Assistance Grant program to reimburse them for the pre-deployment of assets intended to prevent fires from becoming out of control. Currently, states and local governments can only be reimbursed for costs incurred after the funding is granted. It also allows the federal government to increase its share of the costs beyond 75 percent.

“As New Mexico battles the largest wildfire in state history, it’s crucial that state and local governments have the necessary tools to respond to these disasters,” Luján said in a press release.

The three senators also introduced the Post Fire Flooding and Debris Flow Act, which would make it so efforts to mitigate and prevent post-wildfire flooding and debris flow are eligible for funding under the federal Hazard Mitigation Grant Program, which is under the Federal Emergency Management Agency.

“New Mexicans have learned all too well over the past decade that some of the hardest work to recover from these events often begins after the fires are extinguished,” Heinrich said in a press release. “We are seeing the costly toll the climate crisis and these record-breaking fires are having on our communities, our forests, and our watersheds. That is why I’m working to better equip our federal firefighters and first responders for more destructive wildfire seasons and the flooding and erosion that come in their aftermath.”