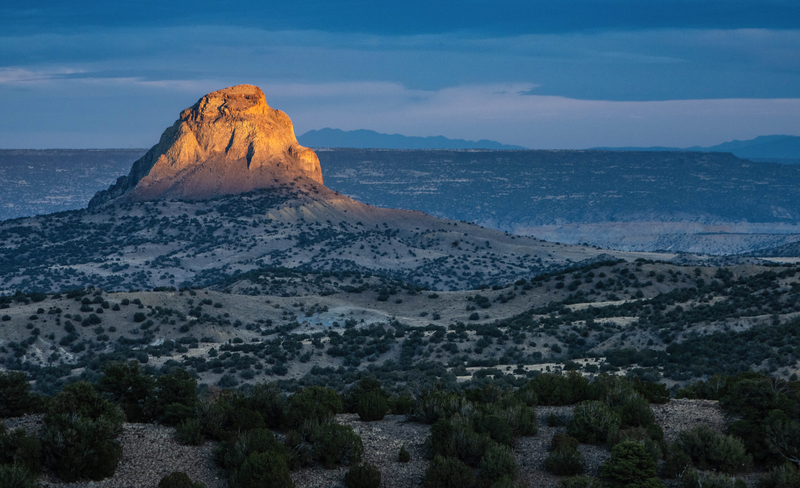 Sacred lands that have been cut off from access will once again be accessible to the public, including the Indigenous people who once served as stewards of those lands.

Conservation groups, tribes, federal officials and state leaders teamed up to acquire 54,000 acres near Laguna and west of Albuquerque.

Part of this land has already been transferred to the New Mexico Department of Game and Fish for management while the rest will be transferred over the next five years.

This purchase includes two adjoining properties and has been referred to as L Bar Ranch. It will, in the future, be combined with the adjacent Marquez Wildlife Management area.

In addition to increasing access to recreation, the acquisition will protect the habitat and archaeological sites near Mount Taylor, a composite volcano that is sacred to several Native American groups.

The property includes sites that are sacred to several New Mexico tribes and Pueblos including Navajo Nation and the Pueblos of Laguna, Acoma and Zuni, including about 1,000 archaeological sites. About half of the property is within the Mount Taylor Traditional Cultural Property. The Mount Taylor Traditional Cultural Property includes federal, Tribal, state, private and land grant properties and encompasses more than 442,000 acres.

In a press release announcing the acquisition, Theresa Pasqual, program director for the Pueblo of Acoma, spoke about her people’s connection to Mount Taylor.

“It’s significant to Acoma in terms of how we orient ourselves to the landscape,” she said. “This particular mountain is associated with the cardinal direction of north, and there is associated religious and cultural significance tied to it.”

She said that the Acoma people would have traditionally used the land in what is now L Bar Ranch to gather timber and plants as well as for its wildlife resources.

“The purchase and protection of the L Bar property represent the potential for younger generations of Acoma children who have never seen those lands to now have a chance to get reacquainted with them,” Pasqual said.

Pueblo of Acoma Governor Randall Vicente also spoke about the historical connection to L Bar Ranch in the press release.

“Prior to becoming privately owned, the area in and around the L Bar ranch was used by the Pueblo for traditional cultural and ceremonial purposes,” he said. “Pilgrimage trails are still evident along with geographic line of sight connections to the Sandia and Manzano mountains. The Pueblo is hopeful that once the purchase is completed an ethnographic study can be conducted to identify areas, locations, and sites of cultural significance.

The organization the Trust for Public Land spearheaded the effort to acquire the land. It has been in New Mexico for about 40 years and focuses on acquiring lands based on community priorities to increase access to nature. In the case of the L Bar Ranch property, the importance to the Pueblos was a driving reason behind the acquisition.

Jim Petterson, the vice president of the Mountain West Region of the Trust for Public Land, said his organization learned about the L Bar Ranch about a year ago when the property came onto the market. After doing some research, the Trust for Public Land began working to acquire this property. That included reaching out to both state and federal officials, who helped champion the acquisition. State Rep. Nathan Small, D-Las Cruces, worked to secure funding to help with the purchase.

“Public lands are central to New Mexicans and our way of life,” Small said in a press release. “The Marquez Wildlife Area expansion will restore access and stewardship to land that is sacred to our tribes, nations and pueblos. All of its big game hunts will go to New Mexicans, while ushering in new recreation and conservation opportunities. I’m proud that our legislature supported this effort that will benefit New Mexicans in perpetuity.”

The Marquez Wildlife Management Area straddles the McKinley and Sandoval county lines and was initially purchased in 1968 to provide opportunities for big game hunting.

The state provided $31 million toward the purchase of the land. The total purchase price was $34.1 million.

In a press release, Gov. Michelle Lujan Grisham said much of that funding came from hunters and anglers. She said the acquisition will protect pronghorn, elk, cougar, deer and bear habitat.

“As the world and New Mexico becomes more urban, it is critical that we conserve wild spaces. Conserving the L Bar Ranches and the existing Marquez Wildlife Management Area is an important step in this process,” she said. “Together they create over 68,000 acres that protect migration corridors and enhance wildlife conservation in New Mexico.”

The habitat management will help the animals that live in the L Bar Ranch adapt to climate change. One way that will be accomplished is by providing a large section of land without fences and barriers. The acquisition will also prevent potential future development that could destroy the habitat. The L Bar Ranch property is home to about 400 species of plants and animals.

According to a press release, had the conservation groups and state and federal officials not been able to secure the acquisition, the land would likely have been subdivided and developed. That would have meant the sites that are considered sacred to several Pueblos and Navajo Nation would have remained in private ownership in perpetuity.

The land could also have been developed for energy extraction, including natural gas and uranium.

Petterson said a mixture of public and private funds were used to acquire L Bar Ranch, including working with New Mexico Wildlife Federation and the National Fish and Wildlife Foundation.

U.S. Sen. Martin Heinrich, a New Mexico Democrat, said in a press release that federal funding from the Pittman-Robertson Wildlife Restoration Act was used to help purchase the land. This act was passed in 1937 and reallocated proceeds from an excise tax on firearm purchases to a grant fund for state wildlife agencies.

“The high mesas, dramatic volcanic cones, and wide-open valleys of this stunningly beautiful landscape near the iconic Mt. Taylor are home to cultural sites for the Pueblos of Acoma, Laguna, and Zuni, and the Navajo Nation,” he said. “There is also abundant habitat teeming with wildlife, including large herds of elk that range from its northeastern foothills all the way to the plateau of Mt. Taylor.”

Prior to the acquisition, Petterson said it could be difficult to get to the Marquez Wildlife Management Area because of private lands. He said the acquisition will increase access to public lands.

He said access to nature is extraordinarily important to mental and physical health.

He said L Bar Ranch features “very dramatic volcanic cones that rise up out of the valley floor.” It also has mesas and ponderosa pine forests as well as grasslands.

Peterson said the Trust for Public Land said the Department of Game and Fish must now develop a management plan for the acreage and he anticipates his organization will be involved in that process as a stakeholder similar to other groups and individuals.

After the ownership transfer is fully completed, which is being done in a phased process, and the management plan is in place, Petterson said members of the Trust for Public Land will enjoy visiting the area like other New Mexico residents.