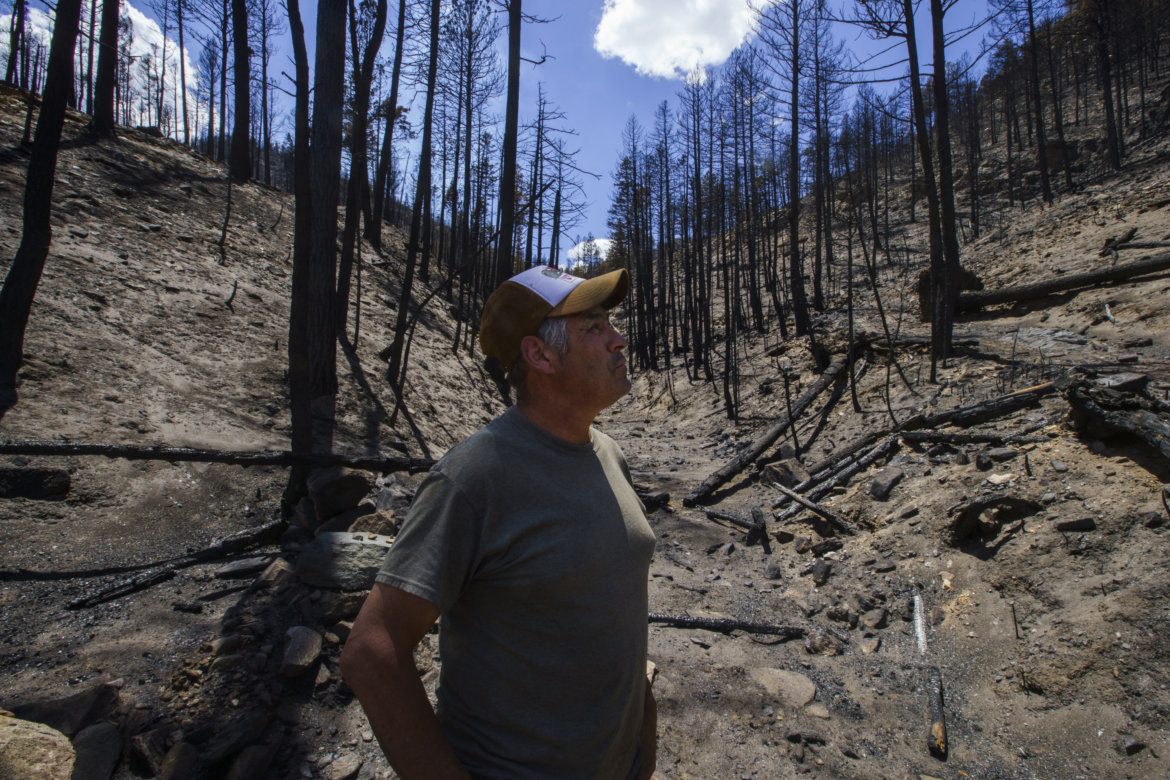 Patrick Griego stands in what was a creek bed in the burn area on his property.

TIERRA MONTE — The air smells of ash and the landscape is leached of color. Spots of green punctuate the valley floor in places. But along the ridges, the powdery residue of charred trees has fallen like snow, accumulating up to 4 inches deep. These are the slices of forest where the fire burned the hottest, scorching ponderosa pines from crown to root. Once titans, they are now matchsticks.

Pola Lopez gestures in their direction, southward toward Hermits Peak. Before a tsunami of flames ripped through this canyon in Tierra Monte, the canopy was so thick that it was impossible to see the nearby mountain. But two prescribed burns set by the U.S. Forest Service — one on Hermits Peak, the other in Calf Canyon to the southwest — have changed all that.

When the blazes merged to form the biggest wildfire in state history, flames engulfed nearly 160 acres of riparian forest that once belonged to her father. “It wiped us out,” Lopez says.

Like so many in the devastation zone, she squarely places the blame on the USFS, not only for starting a prescribed burn in the windy month of April — when gusts reached 70 miles per hour — but for a century of conflict with rural communities. Known locally as La Floresta, the USFS is often seen as a feudal lord, a faraway government entity that has accumulated vast holdings with little idea of how to properly steward them or enough funds to do the job.

The community’s fury runs almost too deep for words, says Antonia Roybal-Mack, a Mora native whose family lost hundreds of acres to the fire. “Really pissed off is literally an understatement.”

In nearly two dozen interviews with people affected by the Hermits Peak/Calf Canyon fire, the same sentiments emerge: The USFS has a history, locals argue, of mismanaging the forest. In particular, they say the agency has limited or prohibited people from the long-held tradition of collecting firewood and other timber, the kind of maintenance the forest needed. If they had been able to tend to it the way they had for generations, they believe the conflagration would have been far less devastating.

“The prescribed burn was the match,” says Roybal-Mack. “But the fuel was there for decades when they wouldn’t let people into the forest to collect vigas or firewood.”

Embedded in the tension is the history of land grants in New Mexico, a system that allowed Spanish settlers, Indigenous peoples and others of mixed descent to obtain tracts of land at the edge of the northern frontier, during Spanish and Mexican rule. From the late 1600s forward, scores of these settlers were granted ejidos, or wildland and forest commons.

In the late 1800s and early 1900s, a mostly Anglo cadre of speculators and profiteers began to claim ownership of the commons, using subterfuge and legal loopholes to essentially transfer the forests to private ownership or the federal government. Well over one million acres eventually ended up in the jurisdiction of the USFS, the University of New Mexico’s Land Grant Studies Program estimates.

In today’s fire zone, the descendants of the dispossessed are among the Forest Service’s sharpest critics. They are joined in their distress by villagers, small-scale farmers, loggers, foragers of traditional food and medicine, Indigenous peoples and acequia parciantes, caretakers of the age-old irrigation ditches now compromised by flames. The USFS has fallen short of its commitment to the land and those who live alongside it, they say.

As the conflagration whips through public and private lands — as of June 6, burning nearly 500 square miles — anger, frustration and grief define the tenor at public forums, in evacuation centers and on social media. Some locals say that, if given the chance, they would have practiced far more sustainable forest thinning in partnership with the USFS, thereby lessening the impacts of a catastrophic fire. Others criticize the way fire crews heavily relied on backburning, a fire-suppression tactic that involves starting smaller fires to deprive a larger wildfire of fuel.

The Santa Fe National Forest, for its part, is committed to working in tandem with local residents and sustaining “traditional communities, their cultures, traditions and values,” according to spokesperson Julie Anne Overton. “Collaboration and partnerships will continue to be the foundation for our work in managing our public lands,” she says.

But so fierce are the emotions and so profound the losses that Roybal-Mack, a lawyer who now lives in Albuquerque, expects to file a lawsuit on behalf of hundreds of plaintiffs, along with the firm Bauman & Dow.

The forests belong to the people, as San Miguel County Commissioner Janice Varela puts it.

Chaos ensued when villagers from Mora were ordered to evacuate on May 2, nearly a month after the fire began. “It was Armageddon,” says Travis Regensberg, a general contractor who towed his bulldozer in from Las Vegas to cut fire lines around homes.

The closest command center and evacuation center were 40 minutes away in Las Vegas. Everyone, especially the elderly, felt “defenseless and lost,” Regensberg says. There seemed to be no one in authority on the ground.

Anger reached yet another height in late May, when the Forest Service released the news that it was responsible for the Calf Canyon fire. A botched prescribed burn in January had turned into a “sleeper fire” that smoldered for months before leaping to life in April and merging with the Hermits Peak inferno — also ignited by a prescribed burn gone wrong.

Back-burning, however, has caused the greatest enmity. To fight ferocious blazes, wildland firefighters are trained to set small back fires to burn grasses and other tinder, starving the larger blaze of fuel.

In Mora, back-burns were set without private property lines in mind, says Patrick Griego, the owner of a small logging business who stayed behind to protect his property. He saw several of his neighbors’ lands get back-burned and, determined to save his 400 acres from a similar fate, cut an extensive fire line with his grader. The wildfire was still distant, he says. To his shock, wildland firefighters appeared one night and back-burned a swath of his property anyway. He recalls watching, seething and feeling helpless, as they set his land on fire. The flames shot 30-feet high in places. Forty acres were gone in 15 minutes, he says.

Some residents say they’ve felt like sacrificial lambs, losing their land for what was arguably the greater good. The back-burns, they add, seemed to be excessive.

It’s not that back-burning isn’t helpful, says Guadalupita Volunteer Fire Department Chief Isaac Herrera, who himself lost 130 acres to the fire. “It’s a great tool when done responsibly,” he notes. But Herrera believes there were times in recent weeks when it was “done irresponsibly and recklessly,” disregarding the deep knowledge of the terrain that he and other locals possess.

In response, managers of the wildfire-fighting effort say they had to make decisions amid the chaos. “We don’t want to burn up anybody’s timber,” says Jayson Coil, who oversees the Southwest Area Incident Management Team. “But there’s been a lot of choices that we’ve been forced to make about what’s most important to save.” Their first priority is to save homes, for example.

If the conditions had afforded firefighters more time and resources, Coil says — and if they’d had several choices at hand — “we would pick something different.”

Recovering from the fire will depend to a certain extent on extinguishing pain from the past. And the past can seem omnipresent in Northern New Mexico.

Over the past 60 years, intense conflicts have erupted over how the USFS has managed the forests, limiting people’s ability to graze livestock, hunt for food and repair acequia headwaters. Some of the protests are still talked about.

In 1966, land-grant activists occupied part of the Carson National Forest, declaring that the land had been appropriated; a year later, they carried out an infamous armed raid on the Tierra Amarilla Courthouse, attempting to win the release of fellow activists.

Even a casual conversation in the fire zone can suddenly pivot to the 1848 Treaty of Guadalupe Hidalgo, which promised — and failed — to protect the rights of land-grantees and allow them to keep their commons.

Today, almost one-quarter of the Carson and Santa Fe National Forests are made up of former land-grant commons. In other parts of the state — in a district of the Cibola National Forest, for example — a staggering 60 percent is made up of these commons, research shows.

The Forest Service has taken local needs into account, spokesperson Overton wrote in an email. For example, people with permits are allowed to cut firewood in designated areas. Many employees of the Santa Fe National Forest are members of the community, she adds. “They grew up here, they have the same ties to community and cultural heritage as their neighbors.”

But today, this offers little comfort. Pola Lopez can still remember how her father, the late state Sen. Junio Lopez, made it his life’s mission to reunite the dispossessed with their land. He was unable to produce wide-scale change, however, and the purchase of the 157 acres now blackened by the fire was a kind of consolation prize. That land, his daughter says, “became his sanctuary.”

In 2009, Pola had the property designated a conservation easement, to protect the forest from development for what she thought was perpetuity.

Now, the willows and scrubby oak are razed and the stream that once flooded the banks of the canyon are completely desiccated. But Lopez is most brokenhearted by the loss of the old-growth forest, the “grandfather trees,” as she calls them. Some were scorched so badly that only holes full of ash remain.