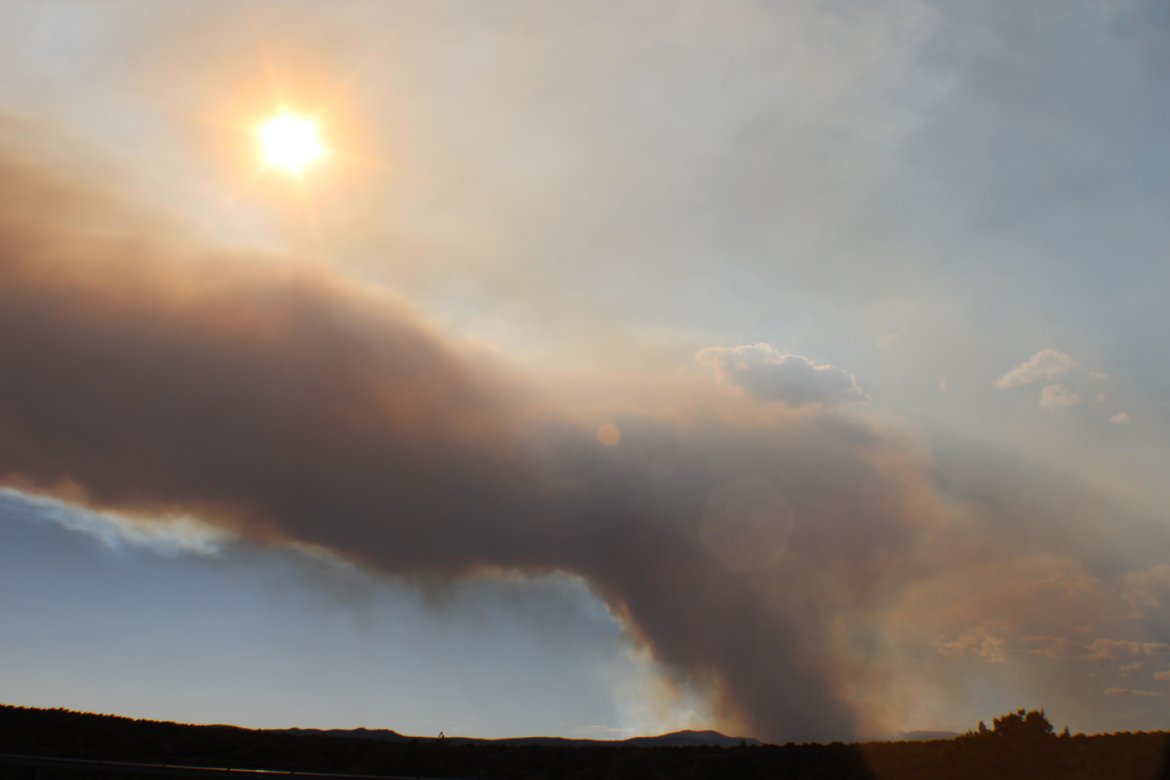 Rock Ulibarri says he tries to be self-sufficient, including growing food and ranching at his northern New Mexico home. But the merged Hermits Peak and Calf Canyon fires that forced evacuations in several counties have made this hard for his family as they’ve lost food and face increased costs.

As the Hermit’s Peak/Calf Canyon Fire continues to char land in northern New Mexico, lawmakers and people impacted by the blaze say it is important that the federal government takes responsibility for starting the fire and provides compensation and assistance to those impacted.

As of Monday morning, the fire had burned more than 320,000 acres and was 70 percent contained. It is the largest of several fires currently burning in New Mexico and is also the largest fire in the state’s recorded history.

The second largest fire in state history, the Black Fire, is also still burning and has engulfed more than 311,000 acres.

While over the weekend President Joe Biden committed the federal government to providing 100 percent of the disaster relief costs for the Hermits Peak/Calf Canyon Fire—including debris removal and emergency protective measures—for a 90-day period, that does not mean that residents and business owners who have suffered financially will be fully compensated. Pending legislation could ensure that people impacted by the fire, which resulted from prescribed burns conducted by the U.S. Forest Service, receive some compensation for property loss, business loss and financial loss.

Ulibarri said it is important for Congress to pass the Hermits Peak Fire Assistance Act, which is modeled after similar legislation that assisted people who were impacted by the Cerro Grande Fire in the Los Alamos area in 2000.

Ulibarri was one of these people who evacuated early on when the fire headed for the land that has been in his family for generations without knowing what would remain when he returned.

When they first evacuated, Ulibarri’s family loaded up the animals and headed to stay at someone else’s property, where they were able to camp. But soon that property was also evacuated.

It took weeks before his family received any financial assistance from the Federal Emergency Management Agency and, even then, it wasn’t much.

While his home survived the fire, it destroyed the timber and the pastures that support his livelihood. That means he will have to purchase livestock feed. He’d also already butchered the animals that were intended to provide meat for his family for a year. This meat spoiled because they weren’t able to keep it cold. Now he will have to choose new heifers to butcher.

“It’s only going to get worse,” Ulibarri said in an interview with NM Political Report.

Once rain comes to the region, likely from the fast-approaching monsoon season, Ulibarri anticipates flooding and debris flows.

Traditional land grant communities have struggled in the face of the fires. The families who live there don’t tend to be rich. Many of them rely heavily on their land to provide for their families through ranching and farming. Ulibarri views the land as something his ancestors passed down to him to take care of.

Because this land has been passed down through generations, the name on the property title doesn’t always match up with the person who lives on the land. In Ulibarri’s case, the title is in his father’s name. In other cases, the land was informally subdivided and one family would build a house on one section while their relatives built on another section.

He said his father does not have the capacity to enter into litigation and having the property in his father’s name complicates his ability to receive financial relief.

“We have a responsibility to help this state recover, to help the families who have been here for centuries, and the beautiful northern New Mexico villages who can’t go home and whose livelihoods have been fundamentally changed,” Biden said.

Biden spoke about the thousands of New Mexico residents who have been displaced by fires, including the Hermits Peak and Calf Canyon fires that were started by the U.S. Forest Service and he described some of what he saw while flying over the fire areas as a “moonscape.”

Biden spoke about the Hermits Peak Fire Assistance Act, which he said U.S. Sen. Ben Ray Luján, a Democrat from New Mexico, is fighting “like hell” to get passed. Additionally, U.S. Rep. Teresa Leger Fernández, a Democrat from New Mexico, is sponsoring the legislation on the House side and met with Biden during his visit. She was accompanied by a third-generation farmer, rancher and business owner, Jerry Gomez, who lost his fire, garage and 90 percent of his property to the fire, as well as several animals. Gomez plans on rebuilding.

“I won’t be sad about what I lost,” he said in a press release. “Let’s make it so my kids and grandkids can enjoy this land because I’m not going anywhere.”