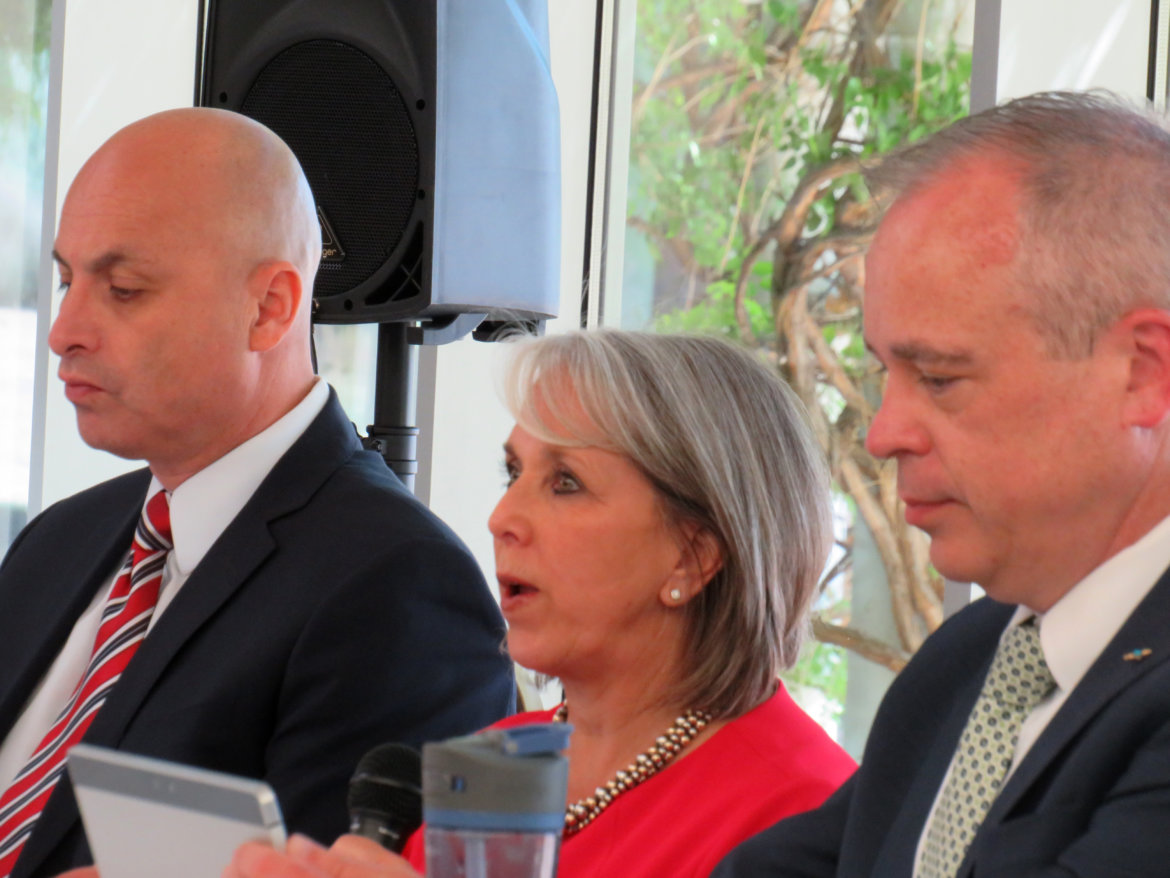 Gov. Michelle Lujan Grisham announces that New Mexico will receive $32 million from the EPA to compensate for the Gold King Mine spill

The U.S. Environmental Protection Agency agreed to pay the state of New Mexico $32 million as part of a settlement announced Thursday in the Gold King Mine spill case.

In August 2015, EPA crews triggered a mine spill in Colorado that sent heavy-metal laden water into the Animas River, which flows through northwest New Mexico.

“There were failures in the system and there were a lot of questions and there was a lot of fear in this community,” Attorney General Hector Balderas said. “I still remember coming in that day, and it was chaotic.”

Balderas said that, in the wake of the mine spill, New Mexico officials realized “the state was going to have to get into a fistfight to really be a voice and to assess damages.”

While EPA Administrator Michael Regan did not attend the event, the agency sent out a statement following the announcement.

“Ensuring clean, safe water for our communities is central to EPA’s mission to protect human health and the environment,” he said in the statement. “Today’s action marks significant progress in the work to protect and enhance water quality for cities and Tribes here in New Mexico. When we work closely with our co-regulators, we can better address the complex challenges presented by historic mining contamination and deliver the environmental benefits and water protections that communities and Tribes in New Mexico deserve.”

The $32 million will primarily be spent in San Juan County, where it could be used to improve water quality and enhance outdoor recreation opportunities.

This is the second settlement New Mexico has reached for damages related to the mine spill. The state previously received $11 million from Sunnyside Gold Corp, a company that owns mining claims in the vicinity, although it does not own or has never operated the Gold King Mine. That $11 million will be spent on four San Juan County projects, many of which are focused on outdoor recreation opportunities.

New Mexico was not alone in suing the EPA. Utah and Colorado also filed suit, however New Mexico will receive more money than the other two states as a result of the settlement.

Once the $32 million is available, the state will issue a call for proposals similar to what was done when New Mexico reached the settlement with Sunnyside Gold Corp. There will also be several opportunities for the public to provide input on where the money should be spent.

Lujan Grisham said the Animas River and its tributaries that were impacted by the spill have largely healed.

“That means this community, the environment department, our federal stakeholders, the Environmental Protection Agency, the Navajo Nation and everyone else did their part to do that,” she said. “What hasn’t happened is creating a holistic investment into the community.”

She spoke about the impacts the spill had on the community. Farmers lost crops because they weren’t able to irrigate and drinking water utilities had to shut off their headgates, leading them to rely on storage for a couple weeks until the river water was deemed safe. The spill also impacted tourism, which is important to the San Juan County economy.

“We can’t have these environmental incidents in our waterways,” she said. “Every drop is precious.”

The Gold King Mine spill led to the creation of the Bonita Peak Mining District Superfund Site, which includes the Gold King area.

McCabe said that, to date, the EPA has spent more than $100 million dollars on cleaning up the superfund site and the agency anticipates spending significantly more in the coming decades.

As part of the settlement, McCabe said the EPA has committed to conducting annual information meetings for the next three years along with NMED to discuss the ongoing efforts in the Bonita Peak Mining District.

The mine spill is one example of how an action taken by a federal agency has had impacts to the environment in New Mexico. Other examples include the PFAS contamination of water sources near Hollomon and Cannon air force bases and fires resulting from prescribed burns.

As the state reached its settlement with the EPA, it is also battling a wildfire sparked by prescribed burns conducted by the U.S. Forest Service. This fire, known as the Hermits Peak/Calf Canyon Fire, has now burned more than 336,000 acres and, as of Thursday, was 72 percent contained.

When asked what lessons could be learned from the Gold King Mine spill litigation and applied to cases like the fires, Lujan Grisham emphasized that prescribed burning is important to reduce the vegetation density and remove dead or dying plants.

“These are legacy issues from decades where governments didn’t quite come together in a productive way,” she said.

She added that there is a “new tone of responsibility and accountability.”

“We should never have taken for granted our forests and our water and our climate,” she said.

McCabe said that there are lessons that can be learned from the mine spill.

State officials say they hope they will not have to pursue lengthy lawsuits to receive compensation for the fire damages.

Earlier in the press conference, he mentioned that following the mine spill, the state filed a federal tort claim notice and that, after 90 days, the claims were denied. The federal government has changed since then. Balderas said he is optimistic that dynamics have changed in a way that will make it so the state does not have to pursue litigation to receive compensation for damages.

“This was a learning lesson where we all, unfortunately, began the discussions when the crisis occurred and then we fought legally,” he said “And I would rather not take these issues to court. I’d rather the leaders working out a productive agreement for the future.”