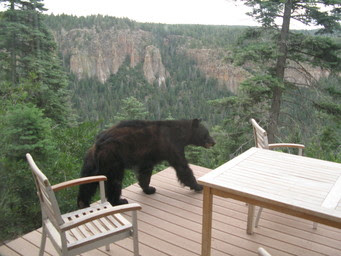 Drought doesn’t only impact the availability of food and water for people and, as dry conditions continue to grip the state even amid the start of monsoon season, the New Mexico Department of Game and Fish has urged residents to be “bear aware.”

Bear-human encounters tend to increase in drought times as wildlife moves into suburbs or even cities in search of resources.

In a press release issued earlier this month, Rick Winslow, a bear and cougar biologist with New Mexico Department of Game and Fish, said that droughts have historically led to more conflicts with bears “not only at camping and picnic sites, but also in more populated areas.”

Nick Forman is the carnivore and small mammal program manager for the department. He spoke with NM Political Report via phone about this topic.

Bears, he said, are omnivorous and rely on food sources like acorns, currant berries and juniper berries. Last fall, he said, the state had decent production of these food sources and, currently, the juniper bushes have berries on them and wildflowers can also provide bears with food.

“There’s definitely available food out there,” he said.

In fact, the changing conditions aren’t all bad news for the bears. Juniper bushes are encroaching into grasslands, which means more juniper berries for the bears to snack on and increasing bear habitat.

But, Forman said, water supplies are being depleted and wildfires are pushing animals out of their traditional territory.

Green vegetation, smells of foods like rotting fruit in gardens, bird feeders and pet food can attract the bears to come into areas where humans live.

Bears are well adapted to their environment, Forman said, and they can survive in lean times like droughts. He said they do not need human help and that people should take steps to discourage bears, such as removing bird feeders, putting trash out only on the day it is going to be collected and not leaving pet food outside where the bears can get to it. Gardeners who grow berries or fruit should pick them when they become ripe and not let them fall to the ground, he said, because the smell of rotting fruit can attract bears.

This is important because bears can create problems if they become used to humans. Forman said if bears are in areas with more humans, and thus more vehicles, there’s a higher risk that people might hit a bear. Bears that associate humans with food sources are also more likely to become dangerous to people and bears can be destructive in an attempt to get to food.

Forman compared them to giant racoons because they are inquisitive and know how to manipulate their environment.

“We really are really blessed to live in a state where we can have these wildlife viewing opportunities,” he said.

Other tips that the New Mexico Department of Game and Fish has for people to be more bear aware include:

People who encounter bears should make themselves look large and, if they have small children with them, should pick up the children. Should the bear attack, people should fight back using anything available, including rocks and sticks, and aiming for the eyes and nose..

More information about living with bears can be found here.