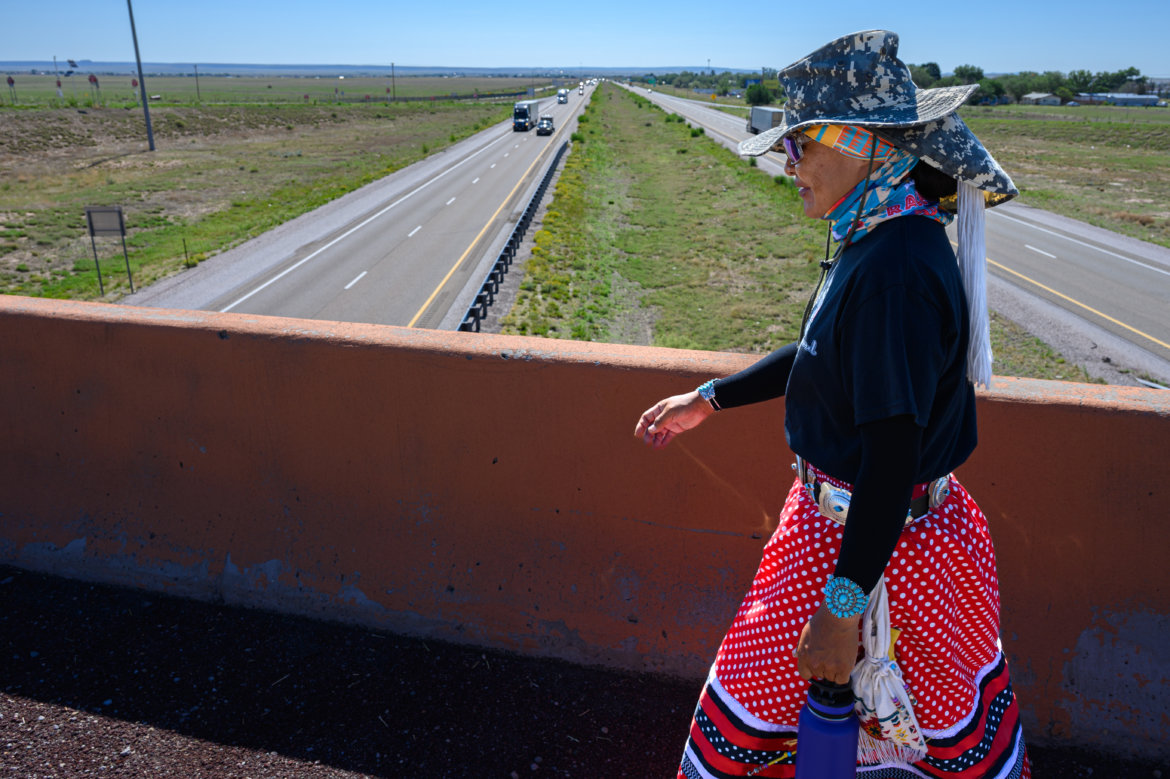 In the wee hours of June 15, 2021, Ella Mae Begay vanished from her home on the Navajo Nation, near Sweetwater, Arizona. She was 62 years old. Within days of Begay’s disappearance, a person of interest was named in the case and local search parties were scouring the roadsides and arroyos near Sweetwater. But more than a year into an investigation by Navajo law enforcement and the FBI, no arrests have been made. Begay still has not been found.

Concerned that she would become yet another overlooked statistic amid a nationwide crisis of violence endured by Indigenous families, one of her nieces took to the streets. Literally. Last year, Seraphine Warren walked 120 miles from Sweetwater to Window Rock to try to get some answers, and some help, from Navajo Nation President Jonathan Nez and the tribal council.

This story was written by Searchlight New Mexico and is republished with permission.

This summer, the 41-year-old Warren (belonging to the Edgewater clan, born for Red Running Into Water, with a maternal grandfather from the Mud people and paternal grandfather of Red House) is marching from Arizona to Washington, D.C., with help from her zeedí (cousin-brother), Herbert Stash. Stash follows her in a rented support vehicle and helps keep her fed, hydrated and blister-free as she attempts to cover 20 miles a day, through summer heat and monsoon rains.

Warren’s purpose is at once political and personal. She is driven by anger — and fear — about the disturbingly high rate of missing and murdered women on the Navajo Nation and around the country. She is gripped by frustration at the slow pace of her aunt’s investigation. She hopes that her footsteps will inspire real action to solve these problems — and help muster the resources needed to find Begay. Equally, she’s motivated by her own need to simply do something. Even though she’s not sure she’ll be able to bring change to her community, she hopes her cross-country odyssey can at least bring her to a place of peace.

Today, there are at least 4,200 unsolved cases of missing or murdered Indigenous people, including women, men and children, according to the Bureau of Indian Affairs. The true total is significantly higher. Accurate figures aren’t available, however, because law enforcement agencies have yet to launch a comprehensive national tracking system and crimes against Native women are underreported, overlooked and misclassified. The toll is staggering: An estimated 84 percent of Indigenous women experience violence in their lifetime. Desperate to find their loved ones, families turn to social media and launch their own grassroots efforts to search for the vanished.

Searchlight New Mexico caught up with Warren on the morning of June 30 in Edgewood, New Mexico, east of Albuquerque. What follows are excerpts from a conversation held over a 15-mile walk, edited for length and clarity.

“Walking in the heat, the rain, none of that has been that difficult. The difficult part has been if I meet a family and they tell me their story, I feel like I can’t help them because I feel like I’m looking for the same help they’re looking for. And I keep thinking about that over and over, and sometimes it makes me want to give up. Like, why am I even doing this, when this other family’s been waiting five years [to find out what happened to their loved one]. Am I going to be waiting five years? Nineteen years? Thirty-five years?

I mean, what can we do to help them? And I feel all this on me, and I have to pray. I have to acknowledge all of creation, and as soon I’m done acknowledging everything along the way, I always feel better. I didn’t know I took a lot of things for granted before. I have a nice house, I have my kids, and I could go missing tomorrow.

There’s a lot of reasons why I’m walking. It’s kind of a symbol of how slow the process is of getting answers, of making change. I could go from here and fly to D.C. and nobody would talk to me. No one would take me serious. But right now, this walk gives everyone a reason to see and know what I’m going through. It seems like the only way to get something done.

Right now there’s people who are going to try to set up a meeting with [Interior Secretary] Deb Haaland, and it’s only because I’m walking. …Even so, probably while I’m doing this walk they’ll put me on a pedestal and then they’ll treat me like shit. They’re going to say that I’m the first Native woman that’s walked to D.C. and they’ll invite me to all of these things, but they won’t do anything about why I’m walking.

I treat this walk as a ceremony, as one long prayer walk. The staff that I carry, it’s kind of like a corn stalk, and it has the four worlds carved into it. It represents that for protection. And those ribbons tied to it are prayers from families who have loved ones that are missing. And this dress is what you would wear for some ceremonies.

One time an old lady was watching one of my livestreams and I was talking about my feelings, and I always cry. And I guess she heard me cry and she asked someone, “What’s that baby crying about?” — in Navajo that’s how you say it, ‘my baby’— and she heard the story of what happened to my aunt, and she saw I was walking to the president’s office. And at that time I used to just wear pants, and I guess she thought, “She’s not getting any respect because she’s wearing pants. She needs to dress like a lady.” Her daughter makes dresses, so she told her daughter, “Make her a dress. Make her beautiful. And then they’re going to respect her.” So she was the first one that made me a dress. She gave me three of them, because of that elderly grandma. The belt, the medicine bags, they’re all for protection. Before, you’d just see me in my hard hat and work boots. I’m an ironworker, putting rebar in bridges.

I’ve heard a rumor that they found Ella Mae near Thoreau before Easter this year. I don’t know if that’s true. But I don’t think they would tell us if it was. Because Jamie Yazzie — law enforcement found her in November, but they didn’t tell her family till four months later. [Jamie Lynette Yazzie disappeared from the Navajo Nation in June 2019; her remains were found in November 2021, on the Hopi Reservation in Arizona, according to the FBI. The case remains unsolved.] So it could be a possibility that they found my aunt.

Some people say, “How do you think a police officer is going to help you if you’re criticizing the investigation?” I don’t say I’m criticizing them. I’m telling them that something is wrong. Like, talk about the issue, what’s the plan to fix it, and do it.

I’ve ran into most of the families that aren’t being helped and I know their stories. It’s only people who haven’t had to deal with Navajo law enforcement yet that thinks I’m criticizing them for no reason. They just told us to keep searching in the Sweetwater area. We’re not professional searchers. But we’re out there just trying to think that my auntie’s just laying out in the open like that. We don’t even know what we’re looking for. Right now, it’s probably bones.

I don’t like talking to most reporters anymore, even though I want to get my story out. Because all you hear is, “Oh she walked this long, and it’s for her aunt.” But they don’t even talk about the whole picture. President Nez comes out and he makes front-page news, and he ends up looking good, but ask him what he did for us.

I don’t want to hear what President Nez has to say anymore, I just want action. We need more police stations on the rez, because it’s a big land. Sometimes it can take officers a few days to respond. I don’t know why our leaders overlook that. I think it needs to be a priority. People feel like they can commit crimes and get away with it because there’s so few officers.

When it’s really quiet and you’re just in your thoughts, you can hear people walking, like footsteps. I’m pretty sure there are spirits that are being sent to look over me. I think about if others are walking with me, maybe some of those who are missing. So every day I dedicate my walk to certain people, certain families who have someone missing. I dedicated one day to Ashlynne Mike, that little girl [age 11, later found murdered] who went missing from Shiprock, and I just felt like running. I wasn’t supposed to run, because I herniated my T-12 and had two surgeries, so they told me not to run — but I ran. And the next day I walked for Pepita Redhair [a 27-year-old Navajo woman who disappeared in Albuquerque in March 2020].

A lot of people have this on-and-off switch to missing and murdered: You put it in the back of your head or you find something to keep your mind busy from it. Me, I feel like every day I wake up and I think about my aunt and how — I don’t know if I should say how lucky I am that I’m still here? And she doesn’t get a chance to live and enjoy her family and everything she used to do. …My auntie, she was a master rug weaver, she wrote words into her rugs — you could tell her mind was always at peace when she wove because of the way her rugs turned out at the end.

We have elderlies, we have traditions and beliefs that they live by. And in our culture, we are not allowed to go to gravesites. Once someone passes away, they tell you never to go back over there — leave them alone. So they [the elderlies] told us, “Why are you searching?” because that’s against their belief. We tried to tell them, “So what do we do? Just leave her out there?”

It tested our beliefs so bad. Prayers weren’t working. It was so hard. I understand why they didn’t want us looking for remains. If you’re going to actually walk in beauty, you have to let go of things, and when you go back to revisit it, you’re bringing back all that bad stuff. It affects your mind and heart. But then again, for someone to just go and do this to my aunt… How are we going to walk in beauty when someone can just so easily do this?”