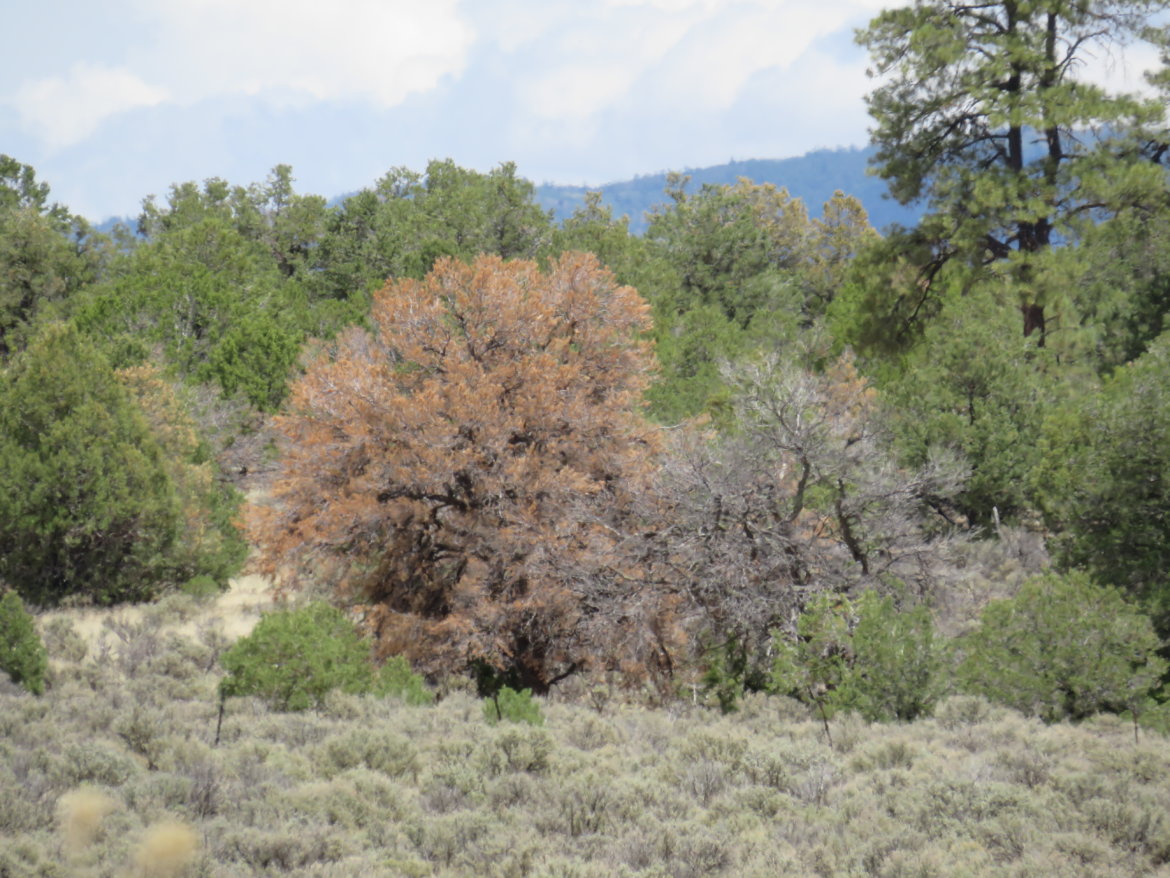 Dead and dying piñon trees dot the slopes of northwest New Mexico, particularly in an area north of Cuba. For the past few years, the State Forestry Department has been monitoring the die off.

John Formby, a forest health specialist with the State Forestry Department, said bark beetles have been infesting trees that are already weakened by drought conditions.

The State Forestry Department and the U.S. Forest Service conduct aerial surveys in the summer. Last year, Formby said, they did a special aerial survey of the Cuba area. Formby said teams have also visited the area to monitor the die off on the ground.

The Bureau of Land Management, which manages some of the checkerboard land where the die off is occurring, says that there’s no evidence of human activity drawing down water tables and causing the trees to die.

“The BLM Farmington Field Office has experienced over four years of severe to exceptional drought conditions. Through these unfortunate dry conditions, trees get stressed and are unable to make enough sap to defend against the bark beetles,” the agency said in an emailed statement.

Formby said the insects can sense when a tree is stressed and attack it.

Bark beetles, he said, are always present at some level in the forests. Factors like drought can lead to outbreaks, which can cause massive die off.

And the area north of Cuba is not the only place where the bark beetles are killing off trees, nor are piñons the only trees being killed by bark beetles. In some parts of the state, ponderosa pines are dying. In others, the spruce trees are being killed.

Formby said the bark beetle outbreaks are happening at all elevations in the state and the underlying factors are drought and dense stands of trees.

“The piñon really is the most visible,” he said.

This is not the first time the forests in the area have seen massive tree death. Formby said about 10 years ago they were subjected to another bark beetle infestation. Formby said there was also an outbreak in the early 2000s.

The trees that die provide habitat for woodland animals. However, Formby said homeowners who have the resources can combat the bark beetle damage by removing recently-killed trees as soon as possible. That, he explained, reduces the bark beetle population.