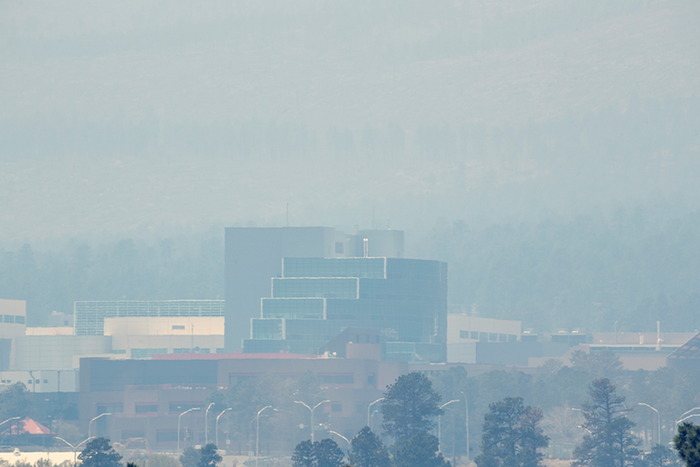 BLACK CARBON, OR SOOT, FROM WILDFIRES, TRANSPORTATION AND OTHER SOURCES HAS A BIG IMPACT ON GLOBAL WARMING, BUT A DATA GAP HAS PREVENTED CLIMATE-CHANGE MODELS FROM ACCURATELY REPRESENTING THAT INFLUENCE. NEW WORK BY LOS ALAMOS NATIONAL LABORATORY CLOSES THE GAP WITH A SIMPLE PARAMETER FOR CLIMATE MODELS

As wildfires char land in the western United States, they are not only destroying property and threatening water supplies. They’re also producing black carbon, or soot, which contributes to climate change.

This is in part because black carbon does not occur alone and other aerosols that linger around it can change how much sunlight is absorbed.

A team of researchers from Los Alamos National Laboratory set out to better understand how much sunlight black carbon absorbs. James Lee is a climate researcher at LANL and a member of that team. He said certain elements found in the air along with black carbon can act as a magnifying glass, essentially focusing the sunlight on the black carbon and increasing how much is absorbed.

The results of the research were published this week in the journal Geophysical Research Letters. Lee is listed as the lead author.

By comparing the ratio of coating material—the organic aerosols found with the soot—to the volume of black carbon, the researchers found they could predict how much sunlight was absorbed.

Black carbon, Lee said, is one of the uncertainties in climate and earth systems modeling. It is easier to estimate future carbon dioxide emissions and, he said, we have less control over black carbon.

Black carbon can change how and where clouds form in polar environments such as the arctic and how much sunlight is reflected from the earth’s surface, he said.

The data gathered by the LANL team could be used in further research. Lee gave an example of how black carbon interacts with water vapor and moisture in the air and see how that changes as black carbon becomes coated with other organic aerosols.

Real-world measurements are needed to better understand how black carbon contributes to climate change, but particle-by-particle analysis—which can accurately estimate how much light black carbon is absorbing—can’t be done in an earth system’s model.

However, by comparing the ratio of coating to the volume of black carbon, more accurate models can be created. When the coatings of organic aerosols around the black carbon are thicker, the amount of light absorbed increases.

One of the tricky parts of the experiment, Lee said, was that the team looked at particle size and amount of black carbon. That means they had two measurements for 60 million different smoke particles.

“But that’s what makes our study a little bit unique is looking at the single particle information,” Lee said.

The data does come with a caveat—the team only looked at black carbon that remained in the troposphere, the lowest part of the atmosphere, and didn’t experience any freezing temperatures. It was also produced within 24 hours of reaching the sampling station.

Lee said this can be plugged into models to better understand how wildfires impact climate change. The team is working with colleagues at Pacific Northwest National Laboratory to incorporate their findings into the U.S. Department of Energy’s Exascale Earth System Model, or E3SM.

How much sunlight is absorbed is also related to other aerosols present in the particle.

“Even though those other components of the particle don’t absorb light, they can actually increase the amount of light that the black carbon absorbs,” he said. “So it’s kind of like a magnifying glass.”

He explained that the other components focus the light on the black carbon, leading it to absorb more.

“Most earth system models incorporate some sort of factor in for that, but it’s very idealized and very simple and not very well constrained,” he said. “So you know, they kind of put some sort of factor in there to say well, mixing in a particle black carbon with other stuff means that it absorbs a little bit more light.”

Black carbon comes from sources like wildfires, power plants, some residential heating where wood is burned and internal combustion engines. Lee said based on the large spikes in black carbon and measurements taken by other equipment, it is likely the black carbon his team analyzed came from wildfires. These wildfires occurred over two summers in the western United States and include the Medio Fire that burned in 2020 in New Mexico as well as plumes of smoke that reached the state from California and Arizona, including the 2019 Woodbury Fire.

Lee said the purpose of the study was to provide better representation of aerosols and black carbon in climate models, which will in turn lead to more informed decisions and policies.

“Wildfires emit soot and organic particles that respectively absorb and scatter the sunlight to warm or cool the atmosphere to a varying net effect, depending on the composition of the smoke mixture,” said Manvendra Dubey, CAFÉ director and project principal investigator at Los Alamos, said in a press release. “This mixing evolves over time as smoke from large megafires disperses globally. We discovered a systematic relationship between the increase in light absorption efficiency of soot with age due to the growth in organic coatings.”