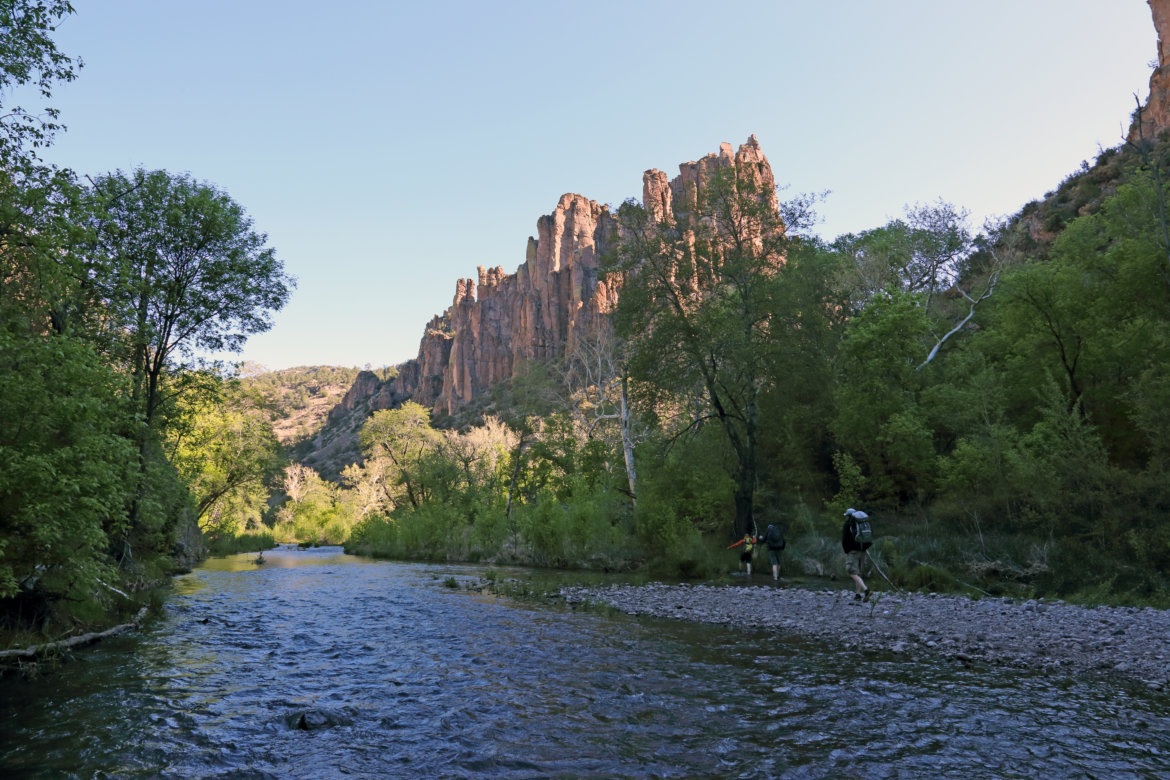 As Joe Kenmore, the Lincoln County emergency services director, saw the rain coming down around the McBride Fire burn scar last weekend, he knew what he had to do: keep people safe and protect property.

Lincoln County is no stranger to the impacts of monsoon rains on burn scars. About a decade ago, another fire swept through the area.

The McBride Fire burned in the same canyon and the burn scar is now threatening the waters and lands in the same place. Kenmore described it as “a continual fight to recover the land.”

A weekend storm starting Aug. 19 led to flooding around the burn scar area. Andrew Mangham, senior service hydrologist for the National Weather Service in Albuquerque, said Lincoln and Chaves counties saw some of the heaviest rains in the state during the weekend storm.

Mangham said there aren’t a lot of gauges in the area to tell exactly how much precipitation the Chaves County area received, but he said it received at least four inches, possibly six to eight inches in places. Parts of Lincoln County, he said, received three to four inches of rain.

As the storm approached New Mexico, the National Weather Service sent out alerts to warn the public about the burn scars and potential flooding.

Mangham said the National Weather Service has had a heavy focus on burn scars because the burn scars respond to heavy rain events by flooding. This is because the soil becomes hydrophobic, meaning less water is able to soak into the ground and more of it runs off.

Kenmore said this runoff brought rocks, silt and debris down from the burn scar.

Recovery after a fire isn’t a one-year process. Kenmore said it will take five to seven years for that recovery to occur.

During that time, the burn scar will continue to pose a threat during monsoon storms.

“Next year, if we see a similarly active monsoon season, we will see a similar pattern of flash flooding,” Mangham said.

The storm comes as part of what Mangham described as an active monsoon season that is expected to continue.

The monsoon season has brought parts of New Mexico up to their average annual precipitation benchmark with four months left in the year. Lincoln County is not the only area where burn scars have led to flooding.

The monsoon helped put out the Hermits Peak/Calf Canyon Fire, but that region has also seen heavy rainfall. Mangham said gauges have measured 13 inches since June.

Meanwhile, the monsoon rain has helped irrigators in the Middle Rio Grande Valley, but, as some are considering planting fall crops, Middle Rio Grande Conservancy District CEO Jason Casuga said the district is warning them that irrigation water may not be available.

“If it ever stops raining for any significant period of time, we’ll find ourselves in exactly the same spot we were in a couple of weeks back when we had drying as far north as Albuquerque,” he said. “So we’re enjoying the rain and it is definitely allowing for deliveries to be made because we’re diverting irrigation and because it’s also raining on property. But in terms of the effect it’s having on the broader drought, I’d probably say, minimal at this point in time.”

From the Rio Grande Compact perspective, where the majority of the precipitation occurred, also means that New Mexico may have to deliver more water to Elephant Butte Reservoir.

The amount of water that must reach Elephant Butte is based on flows at the Otowi Gauge. Much of the rain fell upstream of that point, Casuga said.

“That’s just adding to the amount of water that must arrive in Elephant Butte to satisfy the compact,” he said.

He said the benefits from this monsoon season will really only be felt this year. Without the availability to store water in El Vado Reservoir due to rehabilitation work, next year could see some of the same dry conditions that the Middle Rio Grande Conservancy District was warning people about before the monsoon rains arrived.

Casuga encouraged people to pray for rain if they are the religious type “because that’s that’s the only way we’re going to have water.”

Mangham said the monsoon storms are expected to continue this summer, however they may slow down in mid-September.

He said burn scars are not the only places where people should exercise caution during monsoon season.

“Flash flooding can hit anywhere,” he said. “We can get very strong flash flood events, we can also get these very strong rainfall events to drive river flooding.”

River flooding has occurred along both the Pecos and Gila rivers, which measured record levels at some gauging stations due to the monsoon storms over the weekend.