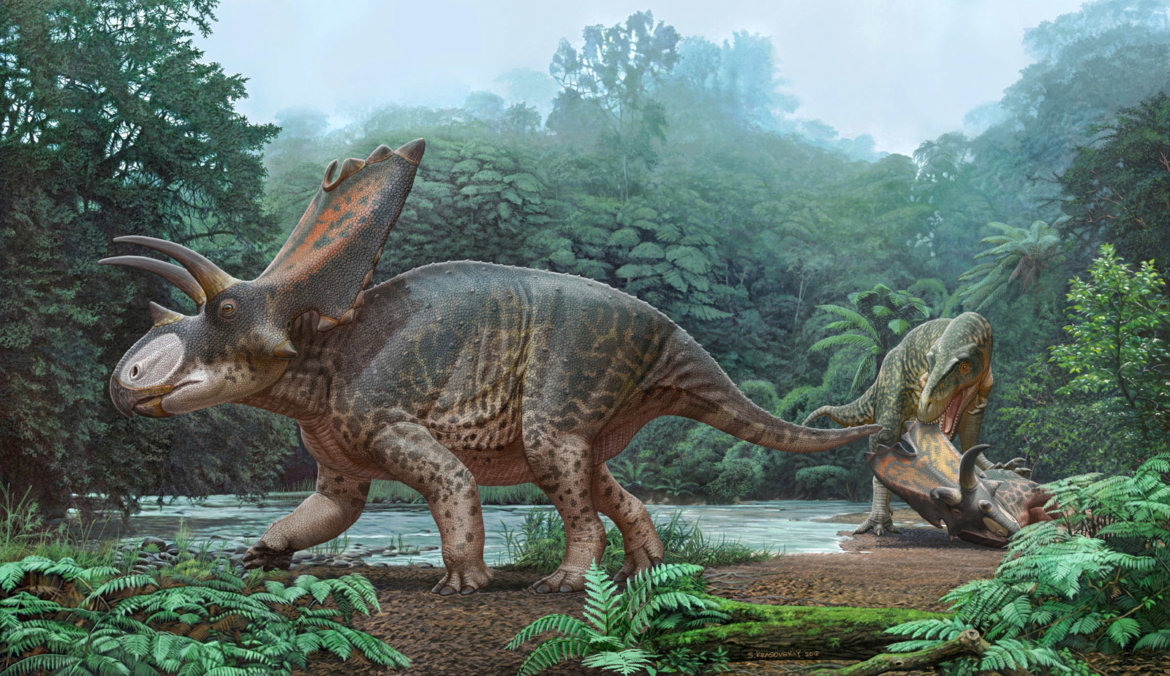 A rendering of the newly discovered Bisticeratops froeseorum, which was found in 74-million-year-old rocks south of Farmington.

When the New Mexico Museum of Natural History and Science first received a dinosaur skull that had been removed from the Bisti/De-Na-Zin Wilderness Area south of Farmington, the paleontologists believed it was a pentaceratops.

Museum curator of paleontology Spencer Lucas explained that the pentaceratops is the common ceratopsian species found in the Bisti. The ceratopsian dinosaurs, the best known of which is the triceratops, are a type of horned dinosaur.

About five years ago, Lucas said the paleontologists began to suspect the skull belonged to a different species—one that had not yet been identified.

A team of scientists including Lucas published a paper in the New Mexico Museum of Natural History and Science Bulletin describing and naming the new species, Bisticeratops froeseorum.

Lucas said the dinosaur lived about 74 million years ago when a sea shore ran up through parts of New Mexico and the Bisti area would have been a tropical jungle environment west of the coast.

Dinosaurs went extinct about 65 million years ago. Lucas said the Bisticeratops and other ceratopsian species in North America lived toward the end of the dinosaur era.

Ceratopsian dinosaurs, he said, were very successful and the Bisticeratops helps demonstrate that this type of dinosaur was diverse.

The discovery as well as other scientific works provide evidence that different dinosaurs lived in what is now the southwest United States than lived farther north in areas like present-day Montana, Lucas said.

Its skull was first removed from the Bisti in 1975 by a team from the University of Arizona and was transferred to the New Mexico Museum of Natural History and Science in the early 2000s.

Lucas said it was placed in plaster after being removed from the Bisti, as is common practice for dinosaur fossils.

The paleontologists at the museum began to clean it up after the museum received it. While working on the skull, they noticed some differences that indicated it was not a pentaceratops.

Lucas said the newly identified dinosaur adds to the evidence that the ceratopsians, and dinosaurs as a whole, were more diverse than previously thought. He said, even today, people tend to underestimate biodiversity.

The ceratopsian dinosaurs, which are part of the Chasmosaurinae subfamily, originated in what is now called Asia before migrating to North America where Lucas said they became more diverse.

According to the paper, five species of ceratops other than the Bisticeratops are recognized that have been found in the San Juan Basin.

Lucas and paleontologist Sebastian Dalman, who was instrumental in naming the Bisticeratops, were part of a team that also identified a ceratops species called Sierraceratops turneri that was found in New Mexico, but was found outside of the San Juan Basin in the south central part of the state.

Dalman referenced one of his favorite bands, Tangerine Dream, when naming Bisticeratops froeseorum. The band founder’s last name was Froese.

While Lucas said identifying new species of dinosaurs is more common than many people think, it is still an exciting occurrence and is one way that the New Mexico Museum of Natural History and Science fulfills the mission that the state legislature gave it when the museum was founded in the 1980s.

By educating the public about dinosaurs and about New Mexico’s past, Lucas hopes to inspire the next generation of scientists.

He said for many children, dinosaurs are the first thing that piques their interest in science. While some, like Lucas, go on to become paleontologists, others pursue paths in medicine, engineering or other scientific fields.

The discovery also underscores the importance of protecting areas like the Bisti/De-Na-Zin Wilderness.

Lucas said this was one reason that it was designated as a wilderness area, which helps protect the fossil-rich landscape from human development.