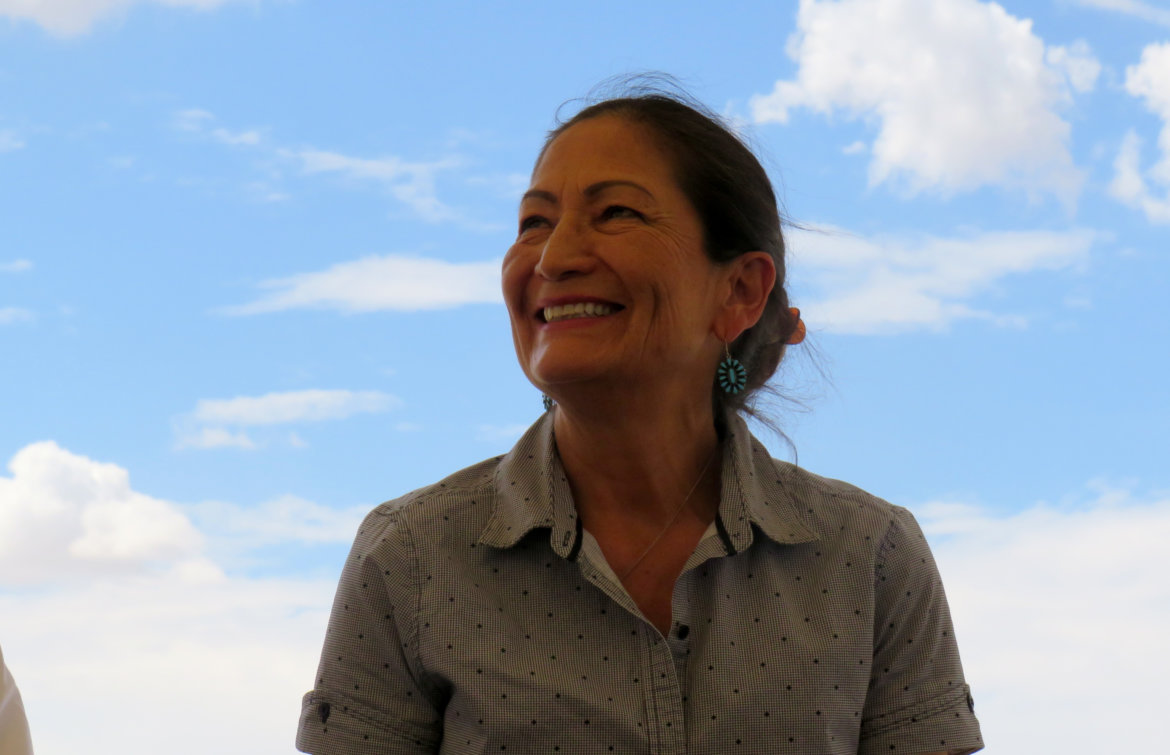 While standing at the future site of the San Juan Solar project, with the coal-fired San Juan Generating Station and an old pump jack in the background, U.S. Deputy Secretary of Energy David Turk said the country’s energy transition could be visualized.

Turk and Secretary of the Interior Deb Haaland joined solar developers, the director of the National Economic Council Brian Deese  and New Mexico officials to tout the funding and incentives made possible through the Infrastructure Investment and Jobs Act that passed in November and the Inflation Reduction Act that President Joe Biden signed last week.

The San Juan Solar project will someday replace the electricity that the Public Service Company of New Mexico receives from the coal-fired San Juan Generating Station.

Deese said that the Inflation Reduction Act provides incentives for companies to build solar arrays in communities like San Juan County that are being hit hard economically by the transition to cleaner energy sources.

During the visit, Haaland said that 24 states, including New Mexico, will be receiving a total of $560 million to cap, reclaim and remediate about 10,000 orphaned oil and gas well sites across the country.

“Those of us from New Mexico are all too familiar with legacy pollution,” she said while announcing the funding.

She said millions of Americans live within one mile of an orphaned oil or gas well.

“These are environmental hazards that contaminate groundwater, litter the landscape with rusted and dangerous equipment, harm wildlife and leak methane, a serious safety hazard and significant cause of climate change,” she said.

Haaland said the funding announced Thursday is just the start, and more funding will be available later.

Meanwhile, Turk announced the start of a Rapid Response Team to help with the energy transition in areas like San Juan County, which is facing the closure of coal-fired power plants.

“It’s rare to have an announcement in a day with so many threads of the work that you do comes together and the multiple positive announcements, but today is one of those days,” Sarah Cottrell Propst, secretary of the state Energy, Minerals and Natural Resources Department, said.

“This funding allows plugging, but also reclamation of the surface so that it will improve the landscape, it’ll improve health outcomes, it will improve water, less methane leakage, and on and on. So we’re really, really pleased to be able to deliver that to New Mexico,” she said.

Cottrell Propst said many of the things in the Inflation Reduction Act and the Infrastructure Investment and Jobs Act built upon successful programs like New Mexico’s orphaned well program.

In terms of the Rapid Response Team, Turk said each word in the name has a meaning.

When it comes to the word response, he said that federal officials in Washington D.C. do not have all the answers and will be working with communities and stakeholders.

“We don’t have all the solutions. What we do have is a number of tools in the tool belt,” he said.

Finally, he said that the word team refers to various federal agencies working together to assist communities impacted by the transition.

“New Mexico has been, and is, an energy powerhouse,” Turk said.

He said he believes New Mexico will be a clean energy powerhouse just as it has provided energy through fossil fuels.

The Infrastructure Investment and Jobs Act and the Inflation Reduction Act are what he described as historic pieces of legislation to help in that transition. He said they provide coherent tax incentives across a full array of clean energy and provide a bit of certainty to help with development.

“This is a huge, huge wind at the back of this transition,” he said.

In the last few years, developers have faced challenges with the COVID-19 pandemic and disruptions in the supply chain. The San Juan Solar project was initially slated to be completed this summer when PNM planned to retire the San Juan Generating Station. The project delays led to concerns about electricity shortages this summer and regulators delayed the closure of unit four at the power plant because of those concerns.

The Inflation Reduction Act includes incentives for solar projects in areas where coal plants are closing.

“Truly the passage of the Inflation Reduction Act last Tuesday has provided a huge boost of good news to the industry and to projects like this,” he said.

Warren Unsicker, the director of economic development for the City of Farmington, attended the event on Thursday.

“It’s all exciting information,” he said. “I look forward to seeing how it plays out in our community.”