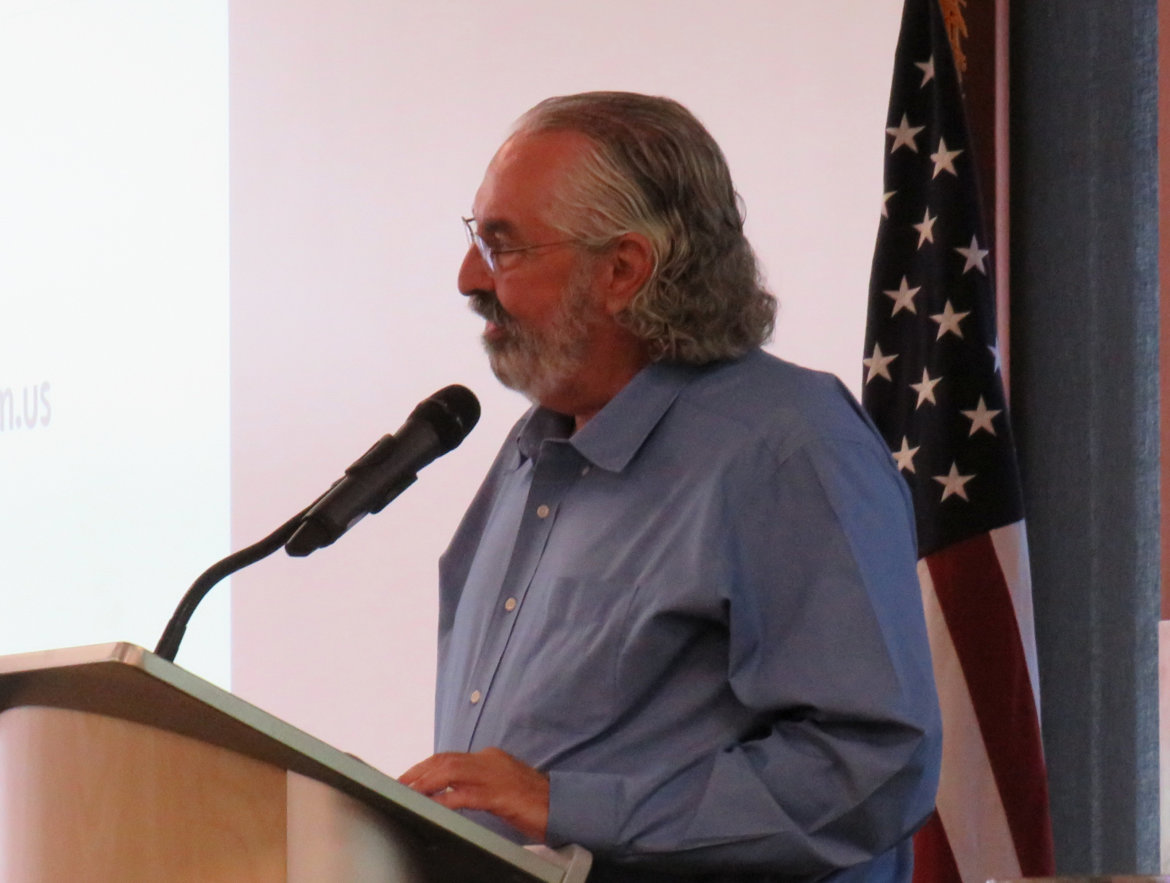 Robert Spillers speaks during a stakeholder engagement meeting in Farmington.

With less than a month left before the scheduled closure of the coal-fired San Juan Generating Station, the New Mexico Environment Department is working on a rule that would ensure any future coal-fired generation emits less than 1,100 pounds of carbon dioxide per megawatt hour.

The new emission requirements will go into effect on Jan. 1 and will impact both existing and future power plants.

“The only affected facility that there is right now, even though it is closing down, is the San Juan Generating Station,” Robert Spillers, an environmental analyst with NMED’s Air Quality Bureau, said during a stakeholder engagement meeting at San Juan College on Thursday.

The meeting on Thursday included discussions about the rulemaking process for coal plants as well as the new ozone precursor rule that applies to oil and gas facilities.

While the San Juan Generating Station is closing, there is a proposal to transfer power plant ownership and keep the plant operating by retrofitting it with carbon capture technology.

During the meeting, Camilla Feibelman, the director of the Sierra Club’s Rio Grande Chapter, expressed concerns that the plant could continue operating after Jan. 1 and prior to completion of a carbon capture retrofit.

Enchant Energy, the company behind the carbon capture project, hasn’t yet begun the retrofit process or secured a transfer of ownership.

One of the reasons cited for the carbon capture retrofit is saving jobs. However, without an agreement to transfer ownership in place, workers will lose their jobs once the remaining unit is retired at the end of the month.

If a transfer agreement is reached, the plant would only be able to operate until Jan. 1 when the new emissions requirements take effect.

“Unless they can meet that standard, they’re not going to be able to operate,” Spillers said.

The 1,100 pounds will be averaged over one year. He said without carbon capture the San Juan Generating Station cannot meet those standards.

The rulemaking that is underway will require technology known as a Continuous Emissions Monitoring System, or CEMS. This technology is installed in the stack and measures the exhaust gas coming out of the stack. Spillers said it operates all the time, even if the unit is not operating.

Additionally, Spillers said the rule will require record keeping to demonstrate compliance. Coal-fired power plant operators will be required to submit quarterly reports that contain information on carbon dioxide emissions, violations of the emission standards or a statement that no violations occurred and the percentage of time that the unit was operating.

While the Four Corners Power Plant is also a coal-fired facility, it is located on Navajo Nation lands and the rule will not apply to power plants on tribal lands.

The rulemaking is required by the 2019 Energy Transition Act, which Spillers described as “a pathway to reduce New Mexico’s carbon footprint” by reducing coal, limiting emissions from coal power plants and increasing requirements for renewable energy to be included in electric portfolios.

This comes in light of increased concern and awareness about both the health impacts of burning coal and the climate impacts.

“Coal’s being pushed off the grid,” Spillers said, adding that competition with lower cost energy sources has also led to coal plants closing.

Joseph Hernandez, a Diné energy organizer for the NAVA Education Project, said that air pollution is not the only thing that should be monitored if the San Juan Generating Station continues operating. He said water use should also be monitored, including how much more water is needed to operate the plant with carbon capture.

A public rulemaking hearing is scheduled for Oct. 26 through 28 at San Juan College. Virtual attendance via web and phone will also be available.