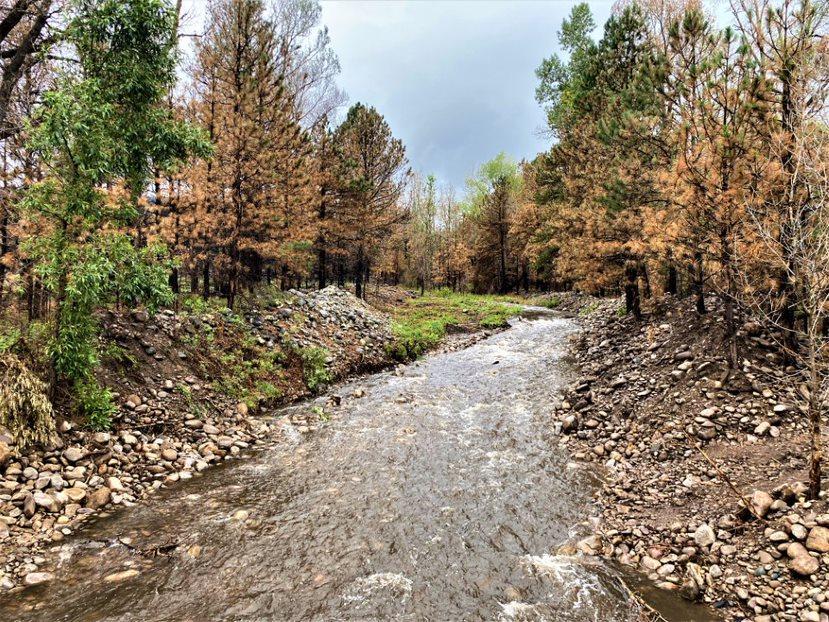 As the Hermits Peak/Calf Canyon Fire smoldered and monsoon season rolled in, response turned from fighting the flames to trying to protect lives and property from flooding and runoff around the burn scar.

Because of the size of the fire and the risks to people—post-burn flooding killed four people—methods like walking or driving the landscape to evaluate the damage weren’t feasible.

“There was a big push on doing this faster than traditional methods and with more effectiveness,” Katherine Kraft, director of product strategy for Teren, said.

Teren is a climate resilience analytics company that has been doing work to gather data about the burn scar. Its methods involve flights over the burn scar to gather LIDAR data that could then be used to prioritize areas for stabilization activities. Kraft described LIDAR as sending laser pulses to the ground from the plane and measuring the response.

Typically it can take months to analyze LIDAR data, but Kraft said Teren used high performance computing and data science to reduce that time down to four to five days.

Teren already had a contract with the Natural Resource Conservation Service and the University of Arizona to work on a national soil moisture model. Through that contract, NRCS asked Teren to do modeling and analysis of the Hermit’s Peak watershed as part of the U.S. Department of Agriculture’s Emergency Watershed Protection Program.

“One of the things about the project is that it had a real sense of urgency on it,” Kraft said. “The emergency watershed protection efforts began immediately following the containment of a fire.”

Kraft said Teren’s partnership with NRCS and the University of Arizona focus on developing a national soil moisture model that helps NRCS determine things like what the best type of vegetation is for a particular area to support a certain land use, such as grazing. Teren has also worked on post-burn analysis east of Santa Cruz, California.

For the Hermits Peak work, Kraft explained that for about four days a plane flew over more than 350,000 acres. In addition to collecting LIDAR data, Teren collected aerial imagery.

Kraft said within a month of initiating the project, Teren and NRCS had determined top priority areas for stabilization projects.

She said it is impossible to do stabilization work on the entire burn scar due to its size.

Teren’s team looked to answer a question: “where do we allocate our resources that matters most to protecting life and property.”

Kraft said the team looked at risks to people’s lives and property as well as risks to drinking water sources. Based on that, they developed a ranking system.

While Teren had done work on burn scars in California, Kraft said it was different because in California they were looking at state park infrastructure and water. When it comes to Hermits Peak, she said the risks are higher.

“We’re talking about life and people’s homes rather than the park infrastructure,” she said.

Kraft said now the biggest challenge is acting upon those stabilization priorities. That means not just saying “this is where you should treat” but also determining methods to stabilize those priority locations. Those methods could include mulching, planting trees or, in some cases, essentially nailing the hillside in place, she said.

That also involves working with the landowners and getting permission to perform projects.

“There’s still a big hurdle to overcome there in terms of just trust,” she said.

Teren’s work is not complete yet. Kraft said the team will be coming back in future years to evaluate the burn scar and the effectiveness of the stabilization work.

Should Teren’s technique prove successful, the team hopes that it can serve as a case study for future wildfires in the western United States.

With climate change, wildfires are becoming larger and more frequent, Kraft said. She said that can stretch resources and funding.

Kraft said decisions must be made to ensure that the resources are used in ways that best protect lives and property.

She said the “boots on the ground” survey after a wildfire is not going to be the most effective because it takes too long and is too expensive for the projected future conditions.