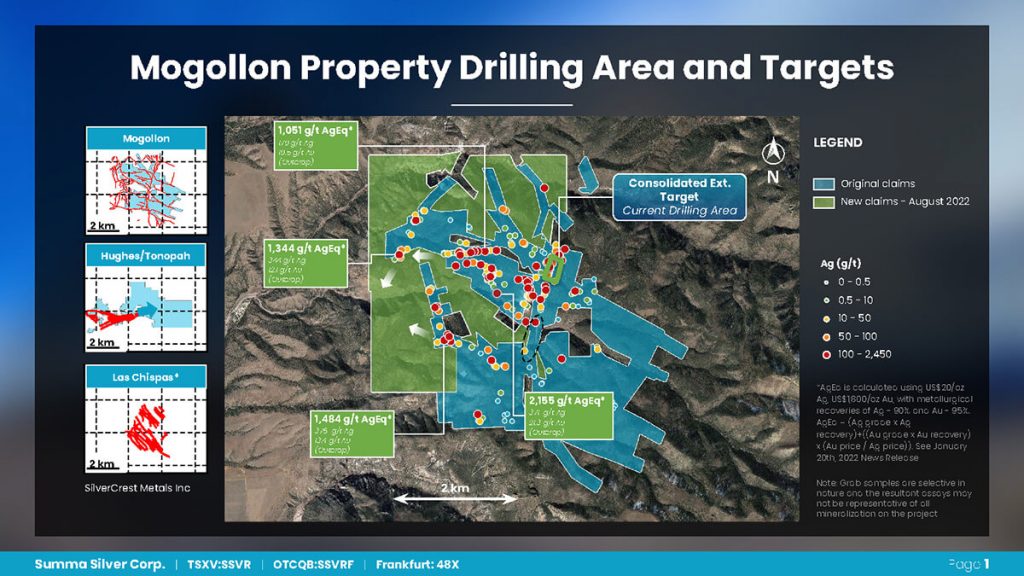 A map showing the location of the recently staked Summa Silver claims.

A new mining claim threatens the ecosystem and sacred sites around the town of Mogollon, about 75 miles northwest of Silver City, according to Indigenous and environmental advocates.

In late August, Canadian-based mining company Summa Silver announced that it had staked a new claim at the Mogollon Project.

“Although the Mogollon mining district remains underappreciated, we think it has good potential to develop into a classic American mining district,” CEO Galen McNamara said in the Aug. 30 announcement. “Within that context, acquiring mineral rights to more land via inexpensive claim staking was an easy decision, particularly given that the new claims are known to have a number of prospect trenches and remain completely unexplored by modern methods.”

While many people might think of jewelry when they think about silver, the metal also plays an important role in solar energy production. This has driven an increased demand for silver. Electrification of transportation is expected to further increase the demand as silver can be used in charging station infrastructure.

Opponents of the silver mining operation say that it could threaten the multiple waterways including the Gila, Mimbres, Little Colorado, Verde and San Francisco rivers as well as Minera, Silver and Whitewater creeks, which provide critical habitat for species like the Gila trout, Gila chub, Chihuahua chub, Apache trout, loach minnow and Chiricahua leopard frog. Additionally, they say it could impact the Mexican spotted owl.

William Tooahyaysay Bradford serves as Ikegee Nant’an, or vice chief, and beh goz ani, or attorney general, for the Chiricahua Apache Nation. He said his people have been fighting against mining since the 1700s when the Spanish brought it to the area.

The name Mogollon references Juan Ignacio Flores Mogollon, a Spanish military officer who was appointed governor of what is now New Mexico by the Spanish crown in the 18th century.

Mogollon brought mining to the rim that now bears his name. The town was settled in the late 19th century as a mining camp after Army Sergeant James C. Cooney found gold and silver in the Mogollon Mountains in New Mexico.

Today, the town of Mogollon—which boasted a couple thousand residents in 1915—is considered a ghost town with only slightly more than a dozen permanent residents.

But, while gold and silver mining ended, the region is still known for its metal mining. There are two open-pit copper mines within 60 miles of the site.

Bradford said mountains have been destroyed for mining.

Additionally, opponents to Summa Silver’s plan point to the proximity of the mining claims to the nation’s oldest designated wilderness area—the Gila Wilderness.

Leia Barnett, the Greater Gila New Mexico advocate for WildEarth Guardians, said outdated mining laws do not require companies to clean up operations and to return the site to its original, pre-mining state.

Seepage from tailings impoundments as well as piles of waste rock polluted water around the nearby Tyrone and Chino copper mines and some nearby residents have concerns about future water impacts as the demand for copper increases.

The New Mexico Office of the Natural Resources Trustee reached a $13 million settlement with the owner of the Chino, Tyrone and Cobre mines in 2011 for groundwater contamination related to the mining operations.

The story of mines polluting waterways is not unique to the southwest part of New Mexico.

In 2015, the Gold King Mine spill that started in Colorado turned the Animas River a mustard orange color.

“We certainly don’t want something similar in the Greater Gila region and around Mogollon,” Barnett said about the Gold King Mine spill.

U.S. Sen. Martin Heinrich, a Democrat from New Mexico, is among the politicians working to update the hardrock mining laws that were written in 1872. He introduced legislation this year in an effort to reform current laws.

“Until there’s comprehensive mining reform, I think communities are really concerned that they’re going to be left holding the bag when these extractive industries come in and take what they need to profit and then leave again,” Barnett said.

Barnett said water pollution from mining around Mineral and Silver creeks in the Mogollon area could harm populations of Gila trout. She said increased turbidity related to mining could also impact the threatened fish.

The U.S. Fish and Wildlife Service is working to recover the Gila trout and released a plan last week that calls for $15.6 million in efforts.

Summa Silver typically targets places where mining has been successful in the past and, in its heyday, the Mogollon mining district was New Mexico’s largest silver mining operation.

In 2020, Summa Silver signed an agreement with Allegiant Gold to allow the company to eventually take full ownership of the past mining works within the historic Mogollon silver and gold mining district.

The new claim represents a 65 percent expansion, from 2,382 acres to 3,886 acres, according to the company.

After signing the agreement, Summa Silver began exploring the Mogollon site. The company took samples from both the surface and in the underground mine workings. It has also surveyed via LiDAR and using drones as well as sampling the soil in the area.

Summa Silver states that the district has unexplored potential. According to information Summa Silver released last year, the site has about 20 miles of veins and faults and approximately a mile of those have been drill tested.

“The Mogollon Property therefore offers a unique opportunity to build high-grade ounces near historic past-production while systematically exploring for new discoveries using modern techniques,” the company stated in the news release issued last year when it received permits to drill.

In December, Summa Silver announced that it had found a nearly 55-yard vein zone in the unmined extensions of the Consolidated Mine in the Mogollon district.

The drilling program expanded in February when a second drilling rig was brought in, however operations paused in March so that Mexican spotted owl surveys could be conducted. The drilling pause came after WildEarth Guardians submitted a letter to New Mexico’s Energy, Minerals and Natural Resources Department highlighting the organization’s concerns that Summa Silver had not conducted Mexican spotted owl surveys prior to drilling. WildEarth Guardians said that the drilling permits required the company to use qualified biologists to conduct the surveys.

The holes that were drilled all revealed substantial high-grade silver or gold, leading McNamara to say in a May announcement that “it is clear we are only in the very early innings here.”

Bradford said the Chiricahua creation story centers the area where the mining claim is located. It was there, he said, that coyote, a trickster and joker, created perpetual darkness.

This led to a competition between nocturnal and diurnal animals.

When the sun returned, Bradford said the animals watched it rise from the Mogollon Rim.

That story has lessons for the Chiricahua people. Bradford said it teaches that “we need to be cautious and thoughtful before we take actions” and that “we have to fight in order to achieve the proper balance.”

He said the Chiricahua believe they were created to safeguard the land.

“Our belief system, our ethic is that we can take what the Earth Mother gives us that’s on the land and we can do it in a sustainable way for the benefit of all, but we can’t drill into it because that’s not sustainable and it causes bad effects which we knew and understood long before the advent of modern mining,” he said.

Since 1783, when the Spanish brought mining to the area, Bradford said “we’ve been excluded from our ancestral lands by mining.”

Bradford said the Chiricahua Apache have met with Summa Silver and tried to convince them not to mine the area.

“We have to look in the mirror and ask ourselves, is this something that we can overlook and still be who we are? No, we can’t,” he said.

The Chiricahua are not alone in this opposition to the mine. Bradford said there are groups like Earthworks and WildEarth Guardians who oppose mining in the Mogollon era. While their reasons may be different, their goal is the same and Bradford described them as “co-travellers.”

He encouraged people who oppose the mining operation to contact elected officials and express their concerns.

At the same time, Bradford said he is empathetic to the people supporting the mining operation in hopes of it bringing economic activity and jobs to the area.

Barnett acknowledged that mining is important to gaining the resources needed for renewable energy, but, at the same time, she said people need to think about “what are we losing versus what are we gaining.”

If one species is lost, others could also be affected, Barnett said.

“We never know the long term consequences of the loss of one species in terms of the larger web of the greater ecosystem,” she said.

Those species aren’t just the fish living in the rivers and creeks in the Mogollon area. The Mexican spotted owl is also a concern.

“We know that the spotted owl are particularly sensitive, extraneous light and noise pollution, both of which would come with increasing mining operations in that area,” Barnett said

The Mexican spotted owl surveys conducted this year found two occupied spotted owl territories within riparian habitats less than a mile from where the drilling operations were occurring, but outside of the half mile buffer zone that would have prevented future drilling during nesting and fledging. The owls found during the surveys included a solitary male living along Silver Creek and a breeding pair along Mineral Creek. The biologists also found two male owls in Graveyard Gulch within the half mile buffer zone, but those owls may have been passing through as they were not seen in subsequent surveys.

Following the completion of the survey, Barnett submitted another letter to EMNRD on behalf of WildEarth Guardians.

In the letter, she pointed to the Graveyard Gulch owls and also said there is not enough data. WildEarth Guardians stated it can take up to four years of surveys to determine where the Mexican spotted owls’ core activity areas are located. Additionally, she highlighted that the owls do not nest every year.