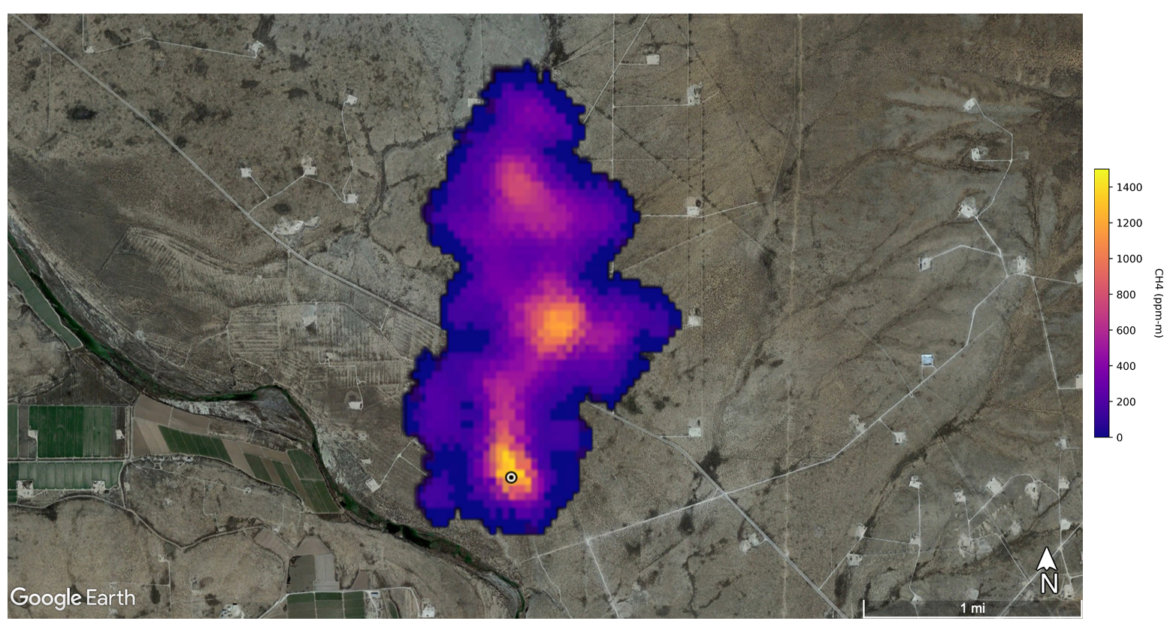 This is our weekly Environment newsletter. You can sign up for the free email, which comes out every Thursday, here.

Before I dig into the news, I would like to remind everyone that Election Day is Tuesday. The results of the election could have major implications for the energy transition as well as current priorities such as the 30 x 30 initiative. Polls close at 7 p.m. and if you are in line when they close you will be allowed to cast your ballot.

Moving on to the energy sector, a new NASA discovery sheds light on methane pollution in New Mexico as the state works to cut emissions.

Earlier this year, two New Mexico regulatory bodies adopted rules to address emissions from oil and gas infrastructure. These rules are intended to address the state’s methane emissions problem. You can read my past coverage of the new methane waste rules here and the ozone precursor rules here.

Now NASA has found a plume of methane approximately two miles long in the Permian Basin near Carlsbad.

A tool originally designed to study how dust affects the climate can also detect super-emitters of methane. NASA installed this equipment, known as the Earth Surface Mineral Dust Source Investigation, or EMIT, on the International Space Station in July. The EMIT system can focus on areas as small as a soccer field and can detect the presence of methane.

Since July, more than 50 super emitters have been identified and most of them are connected to fossil fuels, waste or agriculture.

“Some of the plumes EMIT detected are among the largest ever seen – unlike anything that has ever been observed from space,” Andrew Thorpe, a research technologist at JPL leading the EMIT methane effort, said in a feature NASA published about the technology. “What we’ve found in just a short time already exceeds our expectations.”

Get the weekly environment email in your inbox every Thursday for free. Sign up here.

Scientists estimate that more than 40,000 pounds of methane are emitted per hour at the Permian Basin site.

Methane is a potent greenhouse gas and New Mexico has been working to crack down on emissions from oil and gas facilities.

But the Independent Petroleum Association of New Mexico has filed a lawsuit in an attempt to stop the implementation of the new ozone precursor rules.

On Tuesday, environmental groups like the Environmental Defense Fund intervened in that case in support of the state’s rule.

EDF’s senior director of regulatory and legislative affairs, Jon Goldstein, said rather than spending money and resources to come into compliance with the rule, the oil and gas companies are hiring lawyers and trying to find loopholes.

“That’s really unfortunate in light of the data that continues to come out and shows just how big of a problem methane pollution and associated ozone pollution from oil and gas development are across the state,” Goldstein said.

He said the ozone precursor rule includes provisions that would require regular inspections. That would help identify leaks that contribute to things like the methane plume so that they could be fixed sooner, resulting in less methane leaking into the atmosphere.

The new rules have not hampered oil and gas extraction in the state. On Wednesday, the State Land Office announced record-breaking royalties. The office processed more than $300 million in October in royalties, which is an all-time high for the department.

“We just followed a record-breaking fiscal year with a new, record-breaking month. It’s clear that the oil and gas industry is still thriving and our efforts to uphold environmental protections aren’t a barrier to earning money for education,” Land Commissioner Stephanie Garcia Richard said in a press release. “We’ve shown that it’s possible to provide appropriate oversight of the oil and gas industry and still make massive amounts of money for New Mexico’s school kids. Through our Accountability and Enforcement program, financial audits and more we are holding the bad actors accountable while the good actors continue raking in cash for our schools.”

Public Service Company of New Mexico customers will continue to pay the same rates that include operation of the San Juan Generating Station while the state Supreme Court hears arguments about whether the state regulatory body can require the utility to issue those credits. Read my story here.

New carbon dioxide emission caps for coal-fired power plants do not prevent Enchant Energy from operating the San Juan Generating Station without carbon capture technology, but they will make it harder. Read my story here.

Municipal and county-owned electric utilities are not regulated by the New Mexico Public Regulation Commission and, therefore, new laws like the Community Solar Act and the Energy Transition Act do not apply to them. Megan Gleason with Source NM reported on how solar advocates feel that the Farmington Electric Utility System places stumbling blocks in the way of increased solar adoption. Read her story here.

In the oil sector, a major producer just settled a lawsuit brought against them by an environmental group. The settlement includes a massive investment into emission controls in the Permian Basin. Read my story here.

Environmental advocates say that the federal government is going back on its promise to protect Chaco Culture National Historical Park from oil and gas drilling. Several groups are suing the Bureau of Land Management and Interior Secretary Deb Haaland. Susan Montoya Bryan reported on this for the Associated Press. Read her story here.

Moving on to water news, a state legislator said a project to pipe water from Ute Lake to communities in eastern New Mexico that are seeing wells run dry could serve as a model for other projects to increase water access in rural areas. Read my story here.

The U.S. Department of the Interior announced plans to look into changing operations at Lake Powell and Lake Mead. Jake Bittle with Grist reported on the DOI announcement, including interviewing New Mexico water expert John Fleck. You can read his story here.

The United Nations Climate Change Conference, better known as COP27, begins on Sunday in Egypt. This year’s theme is Delivering for People and the Planet. Learn more about the conference here.