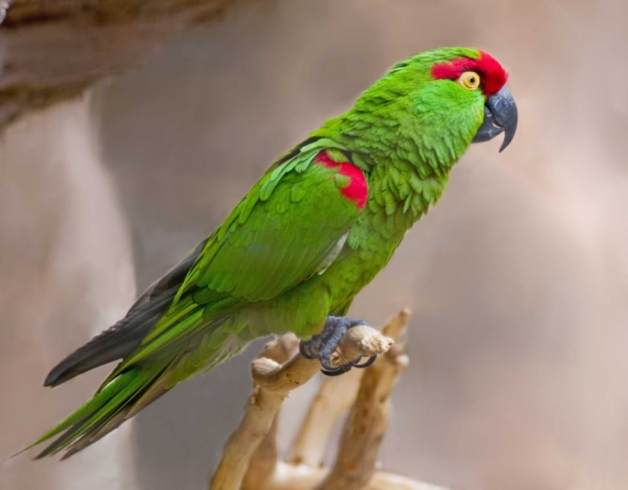 About four years ago, John Moretti, a doctoral candidate at the University of Texas at Austin, was digging through animal bones found at the Bonnell archaeological site in southeastern New Mexico when he found one that stood out. He later identified this bone as belonging to a parrot that was once native to New Mexico, indicating that the people who lived there may have captured or traded the unique, high-elevation parrot species.

He said these bones were essentially in Ziploc bags and had never been identified or cataloged. They’d been removed from the site in the 1950s.

“It was really a mundane task,” he said. “That material hadn’t been identified for a reason.”

He said most of it was not identifiable or wasn’t very interesting. He found some deer and rabbit bones as well as other common bones that did not add to the knowledge of the people who once inhabited that site.

“But one day I emptied out this bag and there was the little squat, stocky bone from a bird,” he recalled in an interview with NM Political Report.

Moretti said he remembered learning about the macaws and parrots at sites like Chaco Culture National Historical Park and he was intrigued by that. During his previous studies, he had reviewed scientific literature about parrots at southwest archaeological sites. This gave him an understanding of what parrot bones look like.

The University of Kansas Biodiversity Institute and the Smithsonian Institution have extensive collections of bird skeletons and that allowed Moretti to compare the bone from the Bonnell site with various parrot species.

By doing so, he was able to find a match—the thick-billed parrot.

It took a while, though, for him to build his case and he said there were times he thought he might be “barking up the wrong tree.” But his curiosity was piqued.

“There’s a persistent connection between these bird bones and the archaeological sites that they’re at and the habitats where these parrots would live,” he said.

The bright green bird once flew through the pine forests of southern New Mexico and Arizona, but its range has now been restricted to high elevations of Mexico’s Sierra Madre Occidental and the endangered parrot has an estimated population of less than 2,000.

It’s long been known that the Indigenous people in the southwest kept and traded parrots, though often the parrot species found at sites is a macaw. Previously, researchers have thought that the parrots were imported. Macaws range from South America to southern Mexico and archaeologists say pre-Columbian Indigenous people likely bred macaws in northern Mexico or the southwestern United States, though the breeding site has yet to be identified.

Moretti’s discovery could indicate that the people were also capturing and keeping or trading the native thick-billed parrot.

After finding the first bone in 2018, he began examining bones from other archaeological sites. He found thick-billed parrot bones at 10 sites in New Mexico and Arizona dating from the year 600 until the 1400s.

The exact role that the thick-billed parrot played in the pre-Columbian societies of the southwestern United States is still unknown.

The parrot relies on pine forests for habitat and half of the sites are located within seven miles of suitable pine habitat.

But some sites don’t have pine forests near them.

He published his results in the September issue of The Wilson Journal of Ornithology.

Moretti said this discovery has implications for the conservation of the endangered species.

The parrot does occasionally visit places in the southwest United States and was last documented in New Mexico in 2003 when one was seen in south-central New Mexico.

In the early 1990s, there was an unsuccessful attempt to reintroduce the parrot in Arizona.

In 2013, the U.S. Fish and Wildlife Service finalized a recovery plan for the thick-billed parrot that focused on international conservation efforts of the species in its current range in Mexico and stated that the potential for expanding the parrot’s range into the United States—either through actively reintroducing the bird or by parrots naturally migrating up into New Mexico or Arizona—would be analyzed.

The thick-billed parrots’ decline was in part due to what the Fish and Wildlife Service described as a “drastic loss of high-elevation mixed-conifer forests” due to logging. In addition to removing large trees from the forests, logging has resulted in a loss of snags where the parrot would nest inside holes in the dead trees.

The loss of the parrot in the United States was likely due to people shooting them.

The parrot has also faced population declines due to the pet trade.

The 2013 plan emphasized the need to protect forests in both the United States and Mexico.

“These things that we can learn from the past, from the natural history record, help us understand our present and our future,” he said.

He said looking at the natural history record helps people “understand where we came from and why things are the way they are.”

The knowledge can also be used to improve the future, Moretti said.

He said there aren’t many thick-billed parrots left.

“As we continue to limit their natural habitat, it’s important to know that they could actually survive in other places like Arizona and New Mexico, that these are actually part of their natural range,” he said.

Moretti said the habitats in the southwestern United States could be important to making sure that the thick-billed parrot “persists for another thousand or more years.”

Moretti said the reactions to his discovery have varied based on who he talks to.

When it comes to birders and ornithologists, Moretti said they do not find the discovery surprising and view it more of an extension of what is already known about the thick-billed parrot.

Archaeologists, he said, tend to look at the discovery in terms of how it fits in with the pre-Columbian trade networks.

“Most everybody else is kind of fascinated and gripped by the idea of these parrots in the American southwest, which most of us think of as these desert, harsh places. How could there be a parrot there? I like those last reactions best,” he said.