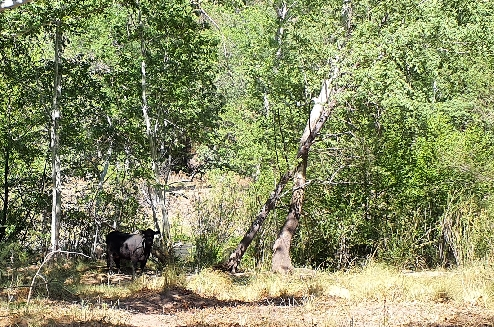 A feral cow is seen along a trail in the Gila Wilderness.

Todd Schulke, the co-founder of Center for Biological Diversity, is no stranger to cattle. He said his father is a large animal veterinarian and that gave him the experience of being around cattle throughout his childhood. But, when he was floating the Gila River and encountered a bull near some rapids, he said there was no fence to jump or barrier to get behind as the animal charged.

Schulke made it through the rapids unscathed, but his encounter with a feral cow in the Gila Wilderness is not unique.

The U.S. Forest Service says it has received numerous reports of people recreating who have had encounters with the feral cattle.

These cows have been damaging resources in the country’s first wilderness for decades. Over the years, hundreds have been removed from the landscape. But they continue to reproduce and trample through riparian areas.

The most effective way the Forest Service has found, so far, to possibly eliminate the herd from the rugged country is to have Wildlife Services shoot them from a helicopter.

This method has received backlash from groups like New Mexico Cattlegrowers Association, who say it is an inhumane, short-term solution to a long-term problem.

In February, a total of 65 cattle were shot via helicopter and another operation is planned for February 2023. The exact number of feral cows remaining in the Gila is unknown, but the Forest Service estimates that it’s between 50 and 150 animals.

Loren Patterson, the president of the cattlegrowers group, said that the aerial shooting of cattle resulted in animals being injured and left to die a painful death. He said some of these injured animals ended up in the Gila River, where they ultimately perished.

“It is unethical the way they did it last time,” he said, adding that it doesn’t look like the proposed methods differ much from the operation earlier this year.

Patterson said the Cattlegrowers Association agrees that the feral cows need to be removed, but disagrees with the method proposed.

Shultz also heard of those animals, including large bulls, that ended up in the river. He said the carcasses were removed from the water and, when he floated the Gila River three months later, he saw no signs of the bodies.

The Forest Service says that cattle will not be shot near any waterbody, spring, designated hiking trail or areas known to be culturally sensitive.

Aerial shooting is done in combination with non-lethal methods like rounding up the cattle. According to a notice the Forest Service issued in November, a contractor will go in along the main stem of the Gila River to round up feral cattle. Those animals will be herded to a corral outside of the wilderness area where a brand inspector will then examine them. If no brands or ownership markers are found, the animals will be transported to Belen for auction.

It is unlikely that any of the cattle will have identifiable owners. Over the past 26 years, 755 cattle have been removed from that part of the Gila Wilderness. Of those hundreds of animals, only one, captured in 1998, had a brand.

The closest grazing allotment is miles away from where the feral cattle are currently roaming.

“Despite numerous efforts over the past 26 years, a large population of unauthorized cattle remains in the wilderness,” the notice states.

But, if there is a branded cow that has joined the herd, Patterson said that it would likely be impossible for the people in the helicopter to see the brand. He said the cattle grow long hair in the winter that can hide brands.

The Forest Service would reimburse the owner for the loss of the cow should that happen.

Prior to the removal of cattle, the Forest Service will alert the public to the plans and allow cattle owners the opportunity to go in and remove any of their animals that may have wandered into the area.

The Cattlegrowers Association sued the Forest Service earlier this year over the February roundup.

This suit resulted in a dismissal agreement. In that agreement, the Forest Service agreed to give 75 days notice to ranchers and the public prior to aerial killing of cattle in the Gila over the next three years.

According to the U.S. Forest Service, the cattle became a feral band in the 1970s when a grazing permittee declared bankruptcy and abandoned his animals on the Redstone Allotment within the Gila Wilderness.

Since then, the Forest Service has tried multiple ways to get rid of the feral animals.

In the 1990s, the agency issued a new permit for the allotment in an attempt to manage the livestock. From 1996 to 1998, the permittee removed 480 cattle. But that did not solve the problem. Cows continued to roam unchecked even outside of the Redstone Allotment boundaries and the grazing permit was canceled.

Feral cattle in the Gila Wilderness trample vegetation and increase erosion. Cattle have been known to gather in areas around water, such as the Gila River and various springs. Their feces, as well as the sediment from erosion, harms water quality. This could jeopardize some threatened or endangered species that rely on the Gila River and its tributaries.

Much of the damage is concentrated in riparian areas, like along the river.

The cattle remove vegetation, trample banks and defecate in the water.

Roundups of cattle in the rough mountainous country can themselves be dangerous. The Forest Service says about 50 percent of the cattle die in the process. It can also be risky for the riders and horses that participate.

While the Cattlegrowers Association calls the shooting a short-term solution, Schulke disagrees. The aerial shooting makes it easier to find the cattle—animals can be seen from helicopters that might not be easy to spot by riders, he said.

He said it is possible that some of the cattle will be able to avoid the helicopters and that follow up shootings may be necessary.

“They’ve been trying to do roundups,” he said.

Schulke said the Forest Service has contracted with people to roundup the cattle for decades and the problem still persists.

“We think that the aerial approach, while certainly not what anybody likes to see happen, can be effective in a year or two,” he said. “Once the cattle are removed completely from the wilderness, there’s no more feral cattle to breed.”

The feral nature of the cattle is another reason Schulke said roundups could be unsuccessful.

The Cattlegrowers Association is not suggesting just rounding up the animals. Instead, Patterson said infrastructure to trap and hold the cattle and to go in to remove them would provide a long-term solution.

“The deaths will only be a short-term solution,” Patterson said.

He described what he called a gathering trap. This is essentially a corral set up. Food or water would be placed inside to lure the animals in. Once the feral cows are accustomed to the trap and are inside, the gates would be closed behind them.

Then the New Mexico Livestock Board could auction them off.

In addition to temporary infrastructure, Patterson said the Cattlegrowers believe the Forest Service needs to take additional measures that would prevent feral cattle from being a problem in the future. That includes more work maintaining fences that have been damaged. Some of that damage has come from fires.

“It shouldn’t be just on the producer to keep the fences adequate,” he said.

The Forest Service does provide material for fence building but permittees have to provide the labor, according to Forest Service District Ranger Henry Provencio who spoke to the Grant County Commission last week.

Schulke said there are provisions that could allow for temporary infrastructure like gathering traps even in wilderness areas, but that helicopters have less impact on the ground.

The Forest Service has examined options like trapping and holding cattle in temporary infrastructure.

Because the helicopters do not have to land, the aerial shooting has minimal impacts. When working in wilderness areas, methods with minimal impacts tend to be favored.

Schulke said the cattle are living in high country that has rugged terrain. He said it doesn’t make sense to move cattle around in that type of setting and that moving the animals from point A to point B would likely prove unsuccessful.

Because of factors like the high cost of hay, holding the cattle and transporting them to the nearest auction house—a couple hundred miles north in Belen—Schulke said selling them at auction would not bring in a windfall of cash.

He said the animals are wild and athletic. He said the bulls are huge and aggressive.

Ultimately, whether the cattle are killed in the wilderness or transported to auction, the end result will be the same.

While some cattle ranchers fear that leaving the carcasses in the wilderness will result in predators like wolves getting a taste for cow meat, Schulke said the Mexican wolf packs are not known to frequent the area where the cattle are living. Many wolves are radio collared and their movements are closely tracked. The carcasses left behind earlier this year did not result in canids moving into the area. He said that surveys indicate that vultures and corvids like ravens will likely be the primary animals scavenging on the carcasses.

This resolution came after Forest Service officials presented their plans to the commission.

“I sincerely think that this isn’t going to take care of the whole problem,” Commission Chairman Chris Ponce said during the meeting. He said laws may need to be changed to help the livestock inspectors and the Forest Service. “My heart breaks leaving animals like that just laying out there.”

He said he disagrees with the cattle carcasses being left out there because predators like mountain lions will become territorial and try to protect their “free meal.”

Earlier in the week, Provencio told commissioners that he did not think the carcasses would create conflicts between predators and hikers. He emphasized that it is very rare for predators like mountain lions to attack people.

During the discussion with the Forest Service last week, Commissioner Gerald “Billy” Billings suggested legislative changes that would allow the party that removes feral, unbranded cattle from an area to receive money when the livestock is auctioned off. Currently those funds go to the state livestock board. Billings said that may encourage skilled “cowboys” to go in and roundup all of the cattle because they could make money off the animals.

That discussion occurred during the Dec. 6 work session prior to the Dec. 8 meeting where the resolution was passed.

Commissioner Javier Harvey Salas agreed with Ponce that the aerial shooting will not completely solve the problem.

The commissioners further expressed concerns that feral cattle could become a problem in other areas.

“The wild, feral cattle do present a problem,” Salas said.

The Forest Service is seeking public comments on the proposed removal of feral cattle. The deadline to submit comments is Jan. 9.

Comments can be mailed to Gila National Forest Attn: Planning Program at 3005 E. Camino del Bosque in Silver City. The zip code is 88061.

They can also be emailed to comments-southwestern-gila@usda.gov.