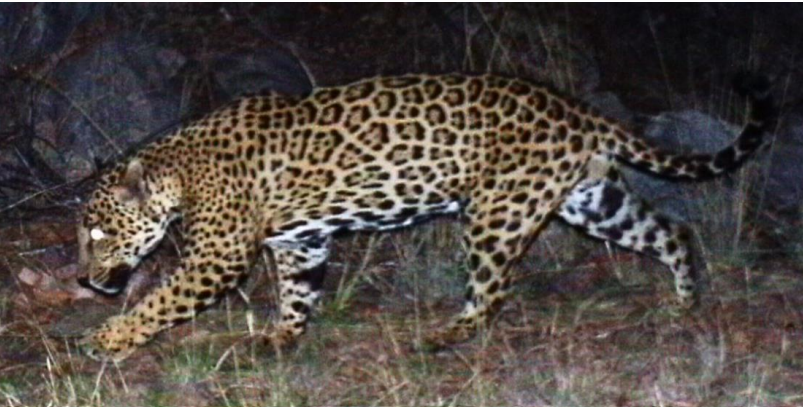 Sombra, a male jaguar, is seen wandering in 2017 in Arizona.

The conservation group has petitioned the U.S. Fish and Wildlife Service to reintroduce the feline to the southwest.

The jaguar is the third largest feline in the world and, during the 18th and 19th centuries, it was found throughout much of the United States.

The jaguar was placed on the endangered species list in the United States in the 1970s and currently only one feline is known to live in the country.

“Over 50 years since the jaguar was placed on the endangered species list, we should not be facing the realistic prospect that this sole jaguar in Arizona will be the last,” the more than 100-page petition states.

Under the proposal, the jaguar would be reintroduced into the Gila National Forest. Critical habitat would be designated in a larger area, including large swaths of Arizona and New Mexico stretching up close to the Grand Canyon. The petition refers to this area as the Mogollon Plateau. The Gila National Forest is located in the southeast portion of the plateau.

Jaguars once roamed in much of what is now the United States. Remains have been found in Tennessee, Florida and Nebraska and bones suspected to have belonged to jaguars have also been discovered in Oregon and Washington.

Meanwhile, there are various reports indicating that jaguars lived in New Mexico. Indigenous oral traditions indicate the jaguar was found in the southern United States. The jaguar also appears in Pueblo, Apache and Navajo stories.

After Europeans colonized the Americas, jaguars in the United States were systematically exterminated.

In 1917, the U.S. Bureau of Biological Survey, a predecessor to today’s U.S. Fish and Wildlife Services, began killing jaguars on behalf of ranchers who feared the cats would prey on livestock.

By the time the jaguar was listed as endangered in 1972, there was only one jaguar left in the country.

Since 1964, a total of nine jaguars have been documented in the United States, all within close proximity to Mexico.

There is now a single jaguar in the United States—a male cat that middle school students in Tucson have named Sombra. It has been photographed since 2016 in the Chiricahua Mountains of Arizona. Sombra was likely born in Mexico and migrated up into Arizona.

Earlier, a jaguar who was dubbed Macho B was killed in Arizona in 2009.

There hasn’t been a jaguar documented in the United States away from the border with Mexico since the Fish and Wildlife Service trapped and killed one in 1964.

The Center for Biological Diversity says that scientists have determined the Gila National Forest is the best remaining jaguar habitat in the southwestern United States.

The Mogollon Plateau, which the Center proposed to designate as critical habitat, features perennial streams and rivers as well as riparian vegetation and forests. Many parts of the plateau are rugged and remote. There aren’t close human population centers. The jaguar would have a variety of prey animals including rabbits, deer, elk and javelina.

The plateau could support a population of 69 to 100 jaguars, according to the petition.

By using mountain ranges known as sky islands as well as waterways like the Gila and San Pedro rivers, jaguars could move from the Mogollon Plateau south to Mexico. That could lead to greater genetic diversity both in Mexico and in the United States.

Michael Robinson, senior conservation advocate for the Center for Biological Diversity, said scientists say that the jaguars throughout the Americas are a single species and that taking them from countries farther south would not result in reintroducing the wrong subspecies. That means, if an agreement could be reached, jaguars from the Amazon could be translocated to the Gila National Forest.

Robinson said that would require an agreement between the United States and the country that the jaguar is coming from.

If wild jaguars are used, Robinson said the U.S. Fish and Wildlife Service would have to make sure that taking an individual jaguar from an area does not jeopardize the population where it is currently living.

The genetics in parts of the Amazon Basin are much more diverse than the northern Mexico populations, he said.

Bringing the jaguar back to the United States could help restore ecosystem health.

Robinson said that the jaguar was exterminated before much research was done on the role that it played in the ecosystems of the southwest United States.

“It’s hard to tell exactly how the ecological changes would be,” he said.

But, Robinson said, the jaguar is a predator at the top of the food chain and, as such, would be “tremendously influential.”

“Sometimes we can damage things without even knowing,” he said. “What the damage is will be discovered once it starts healing.”

He said that was the case with the wolf reintroduction into Yellowstone National Park.

The reintroduction could also lead to increased genetic diversity for the dwindling populations of jaguar in northern Mexico.

There are two breeding populations of jaguar in northern Mexico and these populations have limited to no connection. That means jaguars from one population can’t move to the other population, which limits the flow of genes.

The reintroduction would follow in the footsteps of a successful reintroduction of jaguars to Argentina. That effort began in 1997, though it took until  2020 for jaguars to be reintroduced. Earlier this year, one of the captive-born jaguars that was released in the country’s Ibera National Park gave birth to two cubs. The cubs, which were the first wild jaguars born in Argentina in 70 years, were fathered by a male that was rescued in Brazil where he was found looking skinny and weak. He was then donated to the project.

The Center for Biological Diversity says the Argentina reintroduction could serve as a model for reintroducing jaguars into the Gila Wilderness.

“Jaguar recovery in the United States is no less realistic and no less necessary than the ongoing process of recovering gray wolves reintroduced to the United States in the 1990’s – which was a monumental step in restoring the balance of ecosystems damaged by avaricious yet thoughtless wolf extermination,” the petition concludes. “Let us not forget where jaguars originated evolutionarily and let us similarly, but with the wisdom of experience, welcome them home.”