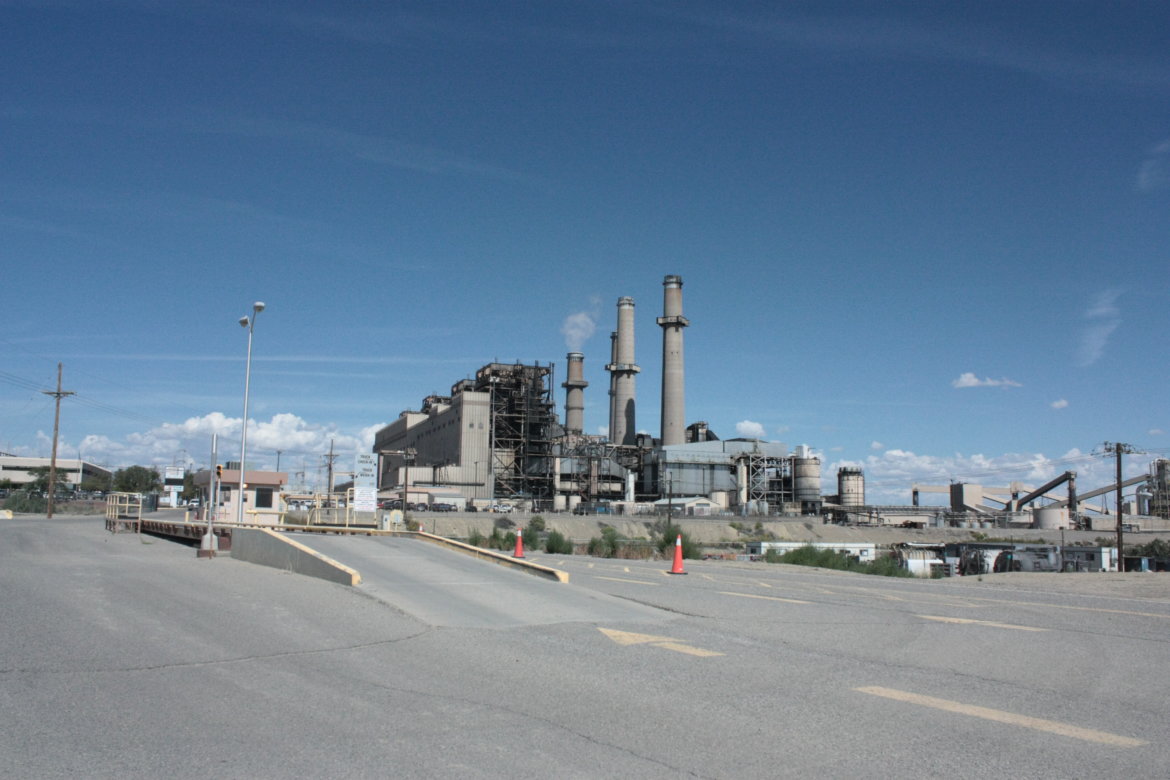 In an email to NM Political Report, Sandoval said the utility submitted these plans on Dec. 28.

“We anticipate working with the County to gain their approval of these plans by early March 2023 with demolition initiating shortly thereafter,” Sandoval said.

PNM owns the site where the power plant is located and Sandoval said the substation located there remains a “vital part of the electric system.” He said PNM will continue to evaluate future uses of the land.

This move, which was required by a county ordinance, comes after the City of Farmington officially announced in December that it was ending the bid to keep the power plant open with carbon capture technology.

The announcement came in a video that Farmington Mayor Nate Duckett released just days before Christmas. Prior to the video, the Farmington City Council met in closed session on Dec. 20 to discuss the project.

“There was a lot of sweat equity and a lot of hours put in to try to keep that successful for our community,” Farmington Electric Utility System Director Hank Adair said in a follow up video the mayor released on Friday.

In Friday’s video, Duckett railed against the Energy Transition Act, which he blamed in part for making it infeasible to pursue the project further, and against the move to transition to renewable sources and away from fossil fuels. Farmington announced the project late in the legislative session, just days before the passage of the Energy Transition Act. While the law does include new limits on emissions, those new carbon dioxide emission caps came into effect Jan. 1 and the rules were developed in a way that may have allowed the carbon capture project to go forward.

As a government-owned utility, Farmington Electric Utility System was not eligible for some of the benefits that PNM received through the Energy Transition Act, including the ability to refinance past investments into the power plant with low-interest bonds.

Duckett pointed to Wyoming as evidence that carbon capture can work. Wyoming recently passed legislation requiring utilities to pursue retrofitting coal-fired power plants with carbon capture technology. WyoFile reported that those costs will be passed on to customers and, last week, the Wyoming utility regulators approved a surcharge for Rocky Mountain Power’s customers that will generate $2 million this year to support carbon capture efforts needed to comply with the law.

In April, WyoFile reported that the carbon capture mandate could raise monthly utility bills by $100.

In a previous video, released before Christmas, Duckett blamed this on the plant’s majority owner and operator, PNM, auctioning off equipment needed to operate the coal-fired generating station. PNM has said that equipment sold could be replaced. The plant closed at the end of September.

Farmington unsuccessfully fought against the auction during a court arbitration process.

Adair said that left the plant without “the heart, the arteries and the muscles” to continue.

“With that gone, how can you survive?” he said.

History of the carbon capture bid

The efforts to keep the San Juan Generating Station open began in 2017 when PNM filed an integrated resource plan with the New Mexico Public Regulation Commission that included an analysis indicating that customers would save money if the power plant closed in 2022 when the contract to buy coal from Westmoreland Coal Company’s San Juan Mine expired.

Farmington fought to have the PRC reject that analysis and, at the same time, began seeking partners who could operate the power plant after 2022.

The city is a partial owner of one of the power plant’s units and an agreement between the various owners allowed any owner that wanted to continue operations to negotiate to acquire the remaining ownership for essentially free.

In 2019, Farmington found a partner for that endeavor—Enchant Energy, then known as Acme Equities. A duo of former oilmen formed the company with a focus on carbon dioxide that could be used for enhanced oil recovery. The proximity to Kinder Morgan’s pipeline that transports carbon dioxide from McElmo Dome in southwest Colorado to the Permian Basin was one of the things that attracted the duo.

In Friday’s video, Duckett referenced this interest in the pipeline.

“You had a company that was looking to utilize natural carbon flowing out of Cortez, Colorado—CO2 flowing out of Cortez, Colorado. They were looking to utilize that in the oil extraction industry,” he said. “And then just 20 miles away from that pipeline going down to Texas is the San Juan Generating Station where they thought, ‘well, hey, we can capture man-made CO2 and then we can keep the power in the grid and be able to sell it.’ And you’re like, wow, it’s kind of perfect.”

They struck an agreement—Farmington would use the clause to acquire full ownership of the plant and then transfer 95 percent of the ownership to Enchant Energy.

While the agreement allowed the city the opportunity to acquire full ownership of the plant, that required successful negotiations with the other owners.

Farmington and Enchant Energy were never able to work out a transfer agreement with the other owners.

In the first video announcing the end of the project, Duckett said Farmington’s efforts were “thwarted by a strategy that is best described as running the clock out” by the other owners including PNM.

PNM maintains that it has been looking out for the best interests of its customers and that Farmington and Enchant Energy were unwilling or unable to provide the financial assurances that the other owners had made clear that they needed for the transfer to take place.

“The current and former owners have worked for more than four years to fully cooperate with the City of Farmington and Enchant,” PNM previously stated. “The owners of the San Juan Generating Station have been clear on what requirements must be met for a transfer to occur. The City and Enchant have been fully aware of the requirements for transfer from the beginning and throughout negotiations, requirements that have not materially changed over the past four years and which the City and Enchant have simply failed to meet. PNM worked closely with the other owners to ensure that there is no additional liability taken on for customers, and the owners cannot now simply authorize a transfer with no financial assurances from the City and Enchant. We cannot put our customers in a position of exposing them to liability without necessary legal protections.”

When Farmington announced its partnership with Enchant Energy, the city assured its residents and electric customers that it would not increase its liability.

While the San Juan Generating Station’s demolition is now inevitable in the near future, Enchant Energy plans to remain in Farmington and is pursuing other projects.

Those projects may not necessarily be located in New Mexico. Recently, a Utah utility rejected Enchant Energy’s unsolicited offer to buy a coal-fired power plant and retrofit it with carbon capture technology.

The San Juan Generating Station project, although failed, provided Enchant Energy with a Front-End Engineering and Design (FEED) study that the company could use as evidence that the technology is viable and to support future proposals. That FEED study was funded in part by federal dollars.

Four Corners offers some advantages for carbon capture that San Juan Generating Station did not have, including being located on Navajo Nation lands. Because it is on Navajo Nation lands, new state limits on carbon dioxide emissions do not apply to the power plant. Adair said that with carbon capture technology the San Juan Generating Station could have met the new limits on emissions. However, that retrofit would not have been completed until 2026.

Sandoval said that PNM initiated the discussion with the other owners about operating unit four for three additional months. He said that extra time bought Farmington and Enchant more time when they could have provided the financial assurances the other owners needed to move forward with a transfer.

In past PRC discussions, the regulators determined that the approval of PNM’s plans to close the power plant did not lock the utility into closing it in the summer as was originally planned.

Continued operation of unit four required agreements with Westmoreland as well as the other unit four owners.

Duckett elaborated on his claims that the extension of unit four’s operations offset the costs to try to save the plant in Friday’s video, highlighting increasing costs of power.

“Frankly, since the time that this power plant has closed, we’ve seen our power costs have doubled,” Duckett said.

In the three months that San Juan Generating Station operated past the original closure date, Adair said Farmington saved $4 million by receiving power from the coal-fired plant rather than buying it from the electricity market.

“That more than offset our costs for the fight,” Adair said.

He said the cold weather and storms this winter have led to average purchase prices of $200 per megawatt of power from the grid. This is in part because demand increases when there are extreme temperatures.

The high costs of natural gas, in part because of the war in Ukraine, have also impacted electric rates.

“Energy is expensive right now, all the way around,” he said.

Related: Farmington electric has not finalized plans for replacing its 47 megawatts from San Juan Generating Station

Adair said that Navajo Dam is about eight percent of the generation the electric utility uses in a given year.

Adair said the San Juan carbon capture project was driven by the desire to preserve jobs and keep the tax base intact for schools in northwest New Mexico. He said FEUS also wanted to maintain low rates for customers.

“From the global level down to the individual person’s name, we fought for the right reasons,” Adair said.