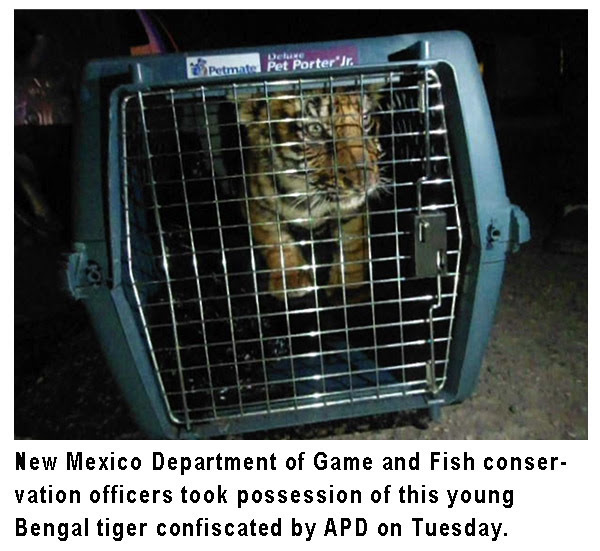 It’s been an unusual past six months for Albuquerque police in terms of exotic animals. Back in August, the police and state wildlife officials confiscated an alligator and announced that they were searching for a missing tiger. This announcement came after conservation officers and law enforcement served search warrants on two residences where reports indicated a tiger was being kept. The tiger wasn’t found, but they found the alligator, which was confiscated.

Then, earlier this week, a tiger cub was found as police responded to reports of a shooting. It soon became clear that this cub was not the same tiger that police have been looking for since August.

The tiger the police began looking for in September was a year old. The one found this week  was only three months old, just barely old enough to begin weaning it off of milk, according to the Albuquerque BioPark, which now has the cub.

Ownership of big cats like tigers is not only illegal in New Mexico, but it is also prohibited at a federal level. A new law that President Joe Biden signed on Dec. 20 prohibits the ownership of tigers and other big cats as pets. Under the new law, only qualified entities such as facilities accredited by the Association of Zoos and Aquariums can own big cats. Those facilities will be required to register them so that first responders are aware that big cats are kept at that location.

“The trade in privately-owned big cats in the U.S. is shrouded in secrecy, making it nearly impossible to track the animals,” Big Cat Sanctuary Alliance BCSA Steering Committee Chairperson Emily McCormack said in a statement. “However, passage of the federal Big Cat Public Safety Act will impact the private big cat trade.”

The new law, however, does not mean that people who legally acquired big cats prior to the passage must give up their pets.

McCormack said current owners must register their big cats with the U.S. Fish and Wildlife Service. They are also prohibited from breeding, selling, trading or buying more cats.

She said breeders of big cats focus on profits rather than genetics, which can lead to inbreeding. The offspring of inbred cats frequently endure debilitating conditions because of that, she said.

Big cats in the wild naturally have large territories that can be many miles wide and cover a diverse terrain, according to Animal Protection New Mexico, a nonprofit group that advocates for animal welfare.

“They have the autonomy to live their own lives, interact with members of their own species as well as countless others, raise and protect their cubs, satisfy their natural drives for exploration and play, and have endless opportunities for physical and mental enrichment,” the group said in an email response to questions from NM Political Report.

In contrast, APNM says big cats that are kept in captivity are often alone and in confined spaces with limited enrichment. This can lead to repetitive behaviors such as pacing. Pacing can be a symptom of frustration and anxiety resulting from physical, psychological and behavioral needs not being met.

Once big cats have been raised by people or habituated to human presence, they cannot be released back into the wild. APNM explained that the cats lose their natural fear of humans, which can get them into situations where they pose a threat to people, other animals or even themselves.

What animals can be owned in New Mexico?

New Mexico divides animals into four groups. Tigers and other big cats fall into group four, which means they are illegal to possess, except by permitted zoos.

Group one animals include dogs, goats, cattle, camels, ostrich and guinea pigs. These are domesticated or semi-domesticated animals and do not need permits.

Group two are wild, or non-domesticated, animals that don’t pose threats to the public, livestock or native wildlife and ecosystems. Animals in this category include the eastern tiger salamander, the Asian box turtle, the glass frog and the red-eared slider. Many of these can be purchased at pet stores and do not require permits to own.

Group three animals are also non-domesticated but wildlife officials say there are some concerns associated with ownership of these species. Because of that, certain provisions must be met. These include waterfowl like swans and wild geese or ducks. It does not apply to domestic waterfowl. Some species of ducks, such as the steller’s eider, are in group four and cannot be kept as pets. One type of bat can be owned with a permit—the broad-nosed bat.

A full list of animals and their classifications can be found here.

Animals that require permits to own include falcons and other raptors. These require a falconer permit, which can be found here.

People wishing to own an exotic animal must file an application at least four weeks prior to bringing the animal into the state.

Darren Vaughan, a spokesperson for the New Mexico Department of Game and Fish, told NM Political Report in an email that there are different permits required for different purposes and certain levels of expertise are required. All permits can be found on the department’s website.

Vaughan said that it is uncommon for the department to receive reports of tigers.

“Animals like raccoons are more common,” he said. “From time to time, we get a report of someone in possession or trying to sell an alligator or Caiman crocodile, as well as certain snake species.”

Vaughan said people who find orphaned animals will sometimes try to keep them as pets, which is also illegal.

“The department sends out annual emails and reminders to leave wild animals wild,” he said. “If someone comes across an orphaned animal, call the Department of Game and Fish. It can be very difficult to rehabilitate and release an animal that has been habituated to humans. In addition, diseases like rabies and Chronic Wasting Disease need to be considered.”

People can report illegal animal ownership through the department’s Operation Game Thief or by calling 1-800-432-4263. Tips may be made anonymously and there are cash rewards available. Those rewards can be up to $1,000 for information about people who illegally keep tigers or other endangered animals as pets if the tip leads to charges being filed. According to a Department of Game and Fish press release, this is the largest cash reward opportunity the department has offered through Operation Game Thief.

Vaughan said that there are online sites where people can purchase exotic animals that are illegal to own in New Mexico.

“The New Mexico Department of Game and Fish has not seen much of an increase over the years, but there is a steady trickle of it happening,” he said. “It can be difficult to know if someone is in illegal possession of an animal without the help of the public, which makes (the Operation Game Thief) program even more important.”

He emphasized that it is illegal to possess most animals that are considered exotic without the proper permit and, he said, the department will prosecute people who illegally own wild animals.

“Certain ‘exotic’ pets can be dangerous to own, such as a tiger or even a raccoon. They are wild animals and can bite, scratch, etc., and potentially spread disease,” he said.

Many big cat species—including tigers, cheetahs, snow leopards and lions—are considered endangered and some tiger species, such as the Malayan and Sumatran tigers, are critically endangered, according to APNM.

Poaching and wildlife trafficking “harms conservation efforts to protect them, disrupts the balance of their ecosystem, harms local tourism, and most importantly, is detrimental to the individual big cats who are denied their natural freedom. International crime organizations are often involved with wildlife trafficking as a source of profit,” the group said in an email response to questions from NM Political Report.

In 2020, the New Mexico Legislature passed Senate Bill 75—the Wildlife Trafficking Act—that made trafficking of tigers or other endangered species, including sale and trade of animal parts, a misdemeanor crime.

People who profit off of wildlife trafficking can also face civil penalties, including fines of up to $10,000 or three times the total value of the animal, whichever is greater.

According to APNM, the passage of SB 75 made New Mexico the 11th state to pass a law banning wildlife trafficking.

APNM says that much of the tiger trafficking in the United States is for the exotic pet trade and tiger cubs are also frequently used in roadside zoos and “other subpar exhibitions” where the public could pay money to touch and hold the cubs—a practice now banned under federal law.

APNM said that it is important to enforce the federal and state laws.

“The more that state and federal law enforcement officers can be trained, well-resourced, and prepared to crack down on these harmful activities, then the more traffickers will find their activities to be less successful and less profitable and the more animals will be left unharmed,” the group said.

The 23-pound tiger cub that was found in a plastic dog crate while police were investigating a shooting in Albuquerque this week was transferred to the Albuquerque BioPark, where zoo officials are conducting a full health analysis and gave the cat its vaccinations.

In the wild, tiger cubs remain with their mother for two years. According to the BioPark, that time period is important because the cub learns social skills from its mother and littermates. Without a mother or siblings, the young cub now relies on specially-trained staff to teach it.

Tigers are expensive animals to care for. The adult tiger at the BioPark requires ten pounds of meat daily as well as supplements and other specialized food.

The upcoming Asia exhibit features a 15-foot climbing structure for the adult tiger as well as 7,800 square feet of space to roam outdoors.

The BioPark will be the tiger cub’s temporary home until an investigation is completed, according to a press release from the Department of Game and Fish. Officials are looking for a facility to permanently take the cat.

As for the alligator that was confiscated in August, the department says it was transported to a permitted zoo facility.