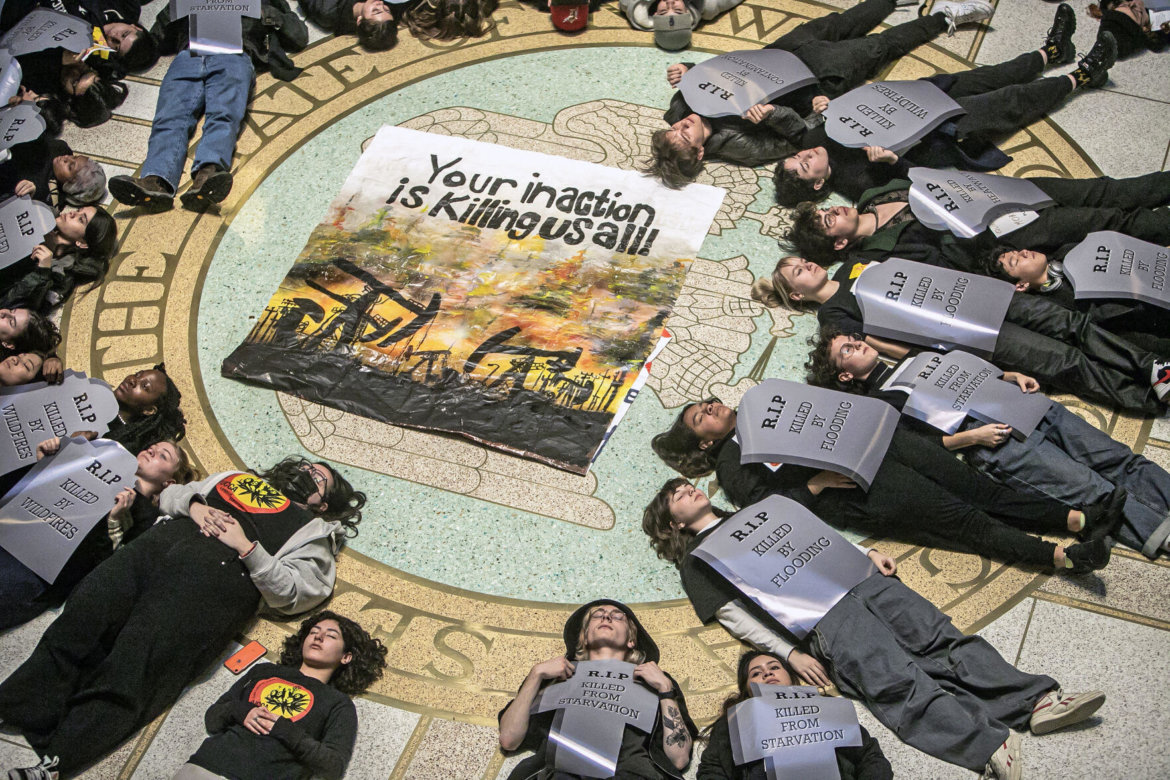 Youth United for Climate Crisis Action activists stage a “die-in” in the Rotunda at the Roundhouse on Jan. 17 while holding paper gravestones to remind lawmakers to address the climate crisis.

A vote is a voice: Supporters of legislation to restore voting rights to felons while they are still on probation or parole held a news conference Tuesday morning to discuss the issue.

Representatives of several community advocacy groups said the effort will be part of a larger voting rights bill that is expected to be filed soon.

Several speakers at the event, including Nicole Porter, an advocate for sentencing reform, said denying the right to vote to felons who have been released from prison and are trying to restart their lives is equivalent to denying them a voice. Porter cited statistics from the Sentencing Project that show about 17,500 felons in New Mexico are affected.

The Senate reelected Stewart by acclamation to the high-profile post, which she has served in for the past two years.

“I want to start by thanking you all for once again placing your trust in me,” she told her colleagues. “I’m humbled and honored to serve as pro tem.”

“Congress is a mess, and here at home, we’ve had lawmakers homes and offices shot up,” she said. “As some of you may know, I was in the ER last week with extremely high heart rate. As it turns out, being a legislator may be bad for your health.”

Stewart called on her colleagues to treat each other with respect even when they disagree.

“Let’s act with the best of intentions just as we would with our families,” she said. “It’s no secret we [often] differ on the best approach to solving a problem. But I know we share the same goal to improve the lives of New Mexico’s children and families. We also believe our state government can be a force for good, and that’s why we are all together.”

Nice try: Members of the House of Representatives voted 45-25 along party lines to elect Rep. Javier Martínez, D-Albuquerque, as the new House speaker.

House Republicans made a game attempt to nominate one of their own — Rep. Candy Spence Ezzell, R-Roswell — for the role. Several Republican members noted this is the 56th legislative session and it is past time to elect, for the first time, a woman to lead the 70-member chamber, where women hold a majority.

Ezzell said in a statement issued by the House GOP caucus she was honored to be nominated and “also honored to have watched over the years as so many women entered this chamber and have led in developing policy for New Mexico.”

Working from home: What would opening day of the legislative session be without at least one demonstration or protest?

Members of Local 7076 of the Communications Workers of America led a rally outside the state Capitol on Tuesday in protest of the state’s decision to have all state employees who have been working remotely return to the office Feb. 2.

The decision led to pushback from labor groups that have criticized the directive as unnecessary and warned it could result in even higher vacancy rates in state government, especially among employees who have to commute, don’t have access to child care or are dealing with other circumstances that would make going back to the office difficult.

Alan Tway, a member of Communications Workers of America who works for the state Department of Health, said many state agencies have too many vacancies, and the return-to-office order may lead to more resignations.

He said the union is open to compromising on a hybrid approach to the issue.

One member of the group carried a sign that read, “Today Is a Good Day to Telework.”

Free flu shots: Those still seeking to get a flu shot can take advantage of Blue Cross Blue Shield of New Mexico’s Care Van at the state Capitol Thursday.

The shots will be free for legislators, Roundhouse staff and members of the public from 10 a.m. to 2 p.m. at the state Capitol, located at the intersection of Old Santa Fe Trail and Paseo de Peralta. No appointment is necessary.

Blue Cross Blue Shield of New Mexico will also be providing information about Medicare at the East Halls of History in the Roundhouse from 9 a.m. to 3 p.m. Thursday.

Quote of the day: “I’ve got better hair than he does.” — House Speaker Javier Martínez, referring to former Speaker Brian Egolf, who handed his gavel to Martínez Tuesday. While Egolf has a full head of hair, Martínez is bald.