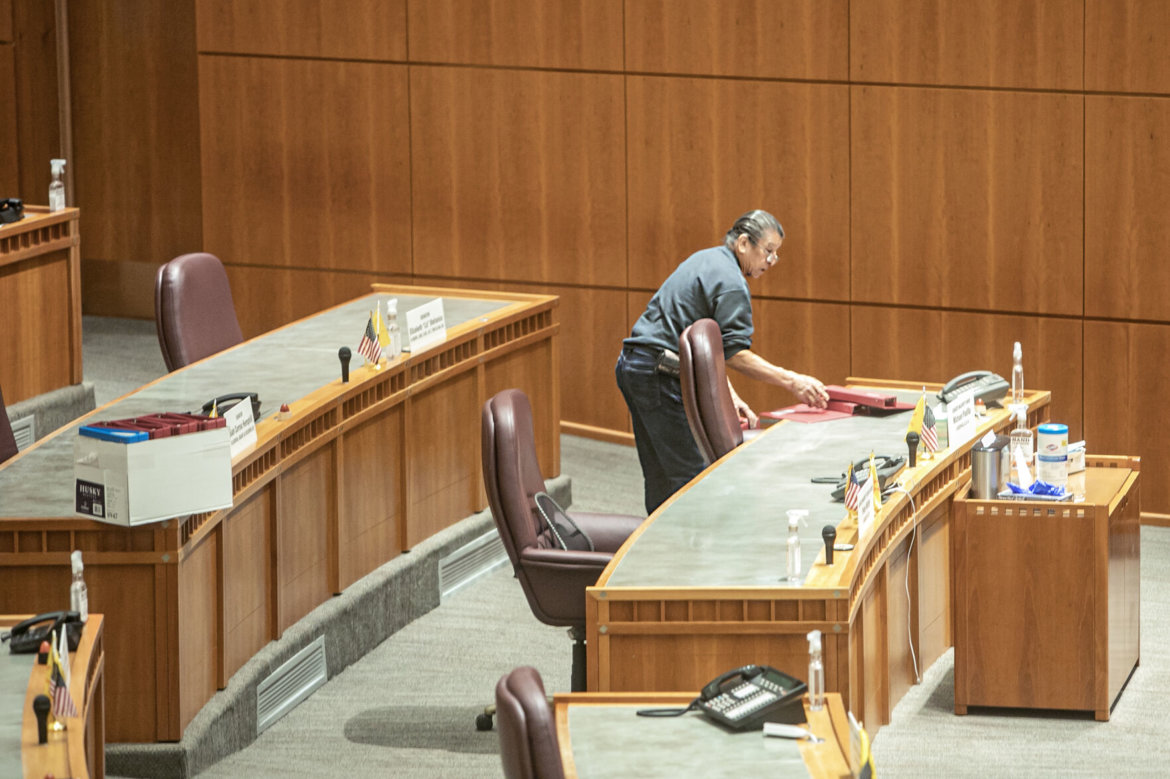 George Chendo, deputy sergeant at arms, stores Senate bill books in the senators' desks at the Roundhouse on Jan. 16, 2023, in preparation for the legislative session.

Amid a backdrop of pomp, protest and potential, new money and old problems will be waiting for New Mexico’s Legislature when its 60-day session opens Tuesday.

Legislators and Gov. Michelle Lujan Grisham agree a mammoth, $3.6 billion windfall in additional revenue offers the opportunity to make inroads on some of the state’s chronic educational, economic and infrastructure issues. But in a long session, hammering out the details — and addressing New Mexico’s many other needs — may not be as easy as simply writing a check.

Senate Majority Leader Peter Wirth, D-Santa Fe, acknowledged the session could be determined on how well the Legislature manages to balance short-term issues against long-term needs.

He said the ongoing discussion about how best to allot new funds in a state budget that could be as big as $9.4 billion will include a “tension” that comes with decisions over whether to use some of the money for recurring programs — which could create pressure to keep investing in programs and policies in future years when money is not plentiful — or more immediate, non-recurring projects.

The strong revenue projections, he said, are “a blessing that requires us to exercise fiscal responsibility.”

Fights over the budget may take center stage, but other pressing issues, including improving the state’s flagging public education system, addressing concerns about crime and reworking tax policy also will consume much of legislators’ time, particularly after an election that centered on those topics.

Still, many legislators said they were eager to begin the ’23 session, which opens at noon and is quickly followed by Lujan Grisham’s State of the State address and a Republican response.

This session marks a return to a semblance of normalcy at the Capitol, following two years of restricted public access due to the COVID-19 pandemic. Several public interest groups said they planned to converge on the Roundhouse during the first week, eager to hold news conferences or stage camera-grabbing demonstrations to gain attention for their causes.

Such events were almost nonexistent in the COVID-19 era, when the ability to get into the building, let alone be near other people, was stunted.

The ability to interact, Wirth said, is something many in the Capitol missed.

“This is a process that involves all the people around each one of us, and we have missed that the past two years,” he said.

He said all visitors have to pass through metal detectors, however, which means visitor lines may be long.

Maj. Dale Wagoner of the New Mexico State Police told the Legislative Council at least 30 police officers will be on patrol at the Roundhouse during the session to provide protection.

Sen. Craig Brandt, R-Rio Rancho, asked Wagoner if he planned to increase police staffing around the Capitol in the wake of a recent string of shootings targeted at Democratic lawmakers in Albuquerque.

“I am concerned about the shootings we have had in the Albuquerque area,” Brandt said, hours before Albuquerque police made an arrest in the case.

Wagoner said there are no plans to beef up state police crews because of the shootings, which did not result in any injuries.

Lujan Grisham’s State of the State address, which will take place on the floor of the House of Representatives, is expected to come in the early afternoon. In the previous two years, her speeches were made online.

Lujan Grisham’s legislative priorities are likely to include affordable housing, a stronger health care system, improving educational outcomes and public safety. She’ll also focus on efforts to diversify the economy in a state where much of the revenue growth is pinned to the oil and gas industry.

While the governor enjoys large Democratic margins in both the House and Senate, she’ll also face a Republican contingent that has been vocal in its criticisms of her policies and solidly against what likely will be a legislative effort to codify the right to access an abortion.

New faces will be prevalent in the Legislature; 17 new members will be sworn into the House of Representatives Tuesday. But there’s little mystery about leadership on either side of the aisle — those decisions were made late last year. House members are expected to vote to confirm Rep. Javier Martínez, D-Albuquerque, as the House Speaker, succeeding the departing Brian Egolf. The Senate is expected to confirm Senate President Pro Tem Mimi Stewart, D-Albuquerque for another term.

Republicans in the House will be led by Rep. Ryan Lane of Aztec while the GOP’s Senate caucus will be headed by Sen. Greg Baca, R-Belen.

Some incoming House members expressed a sense of both hope and nerves a day before the session begins.

“I feel a sense of pride but also have the butterfly nervous feeling as well,” said Harlan Vincent,q a Republican from Glencoe.

Tanya Mirabal Moya, a freshman Republican from Belen, said she is “definitely excited” about starting her two-year term Tuesday.

“The unknown almost makes me a little anxious,” she said. “But I’m comfortable in chaos, so I should be fine.”