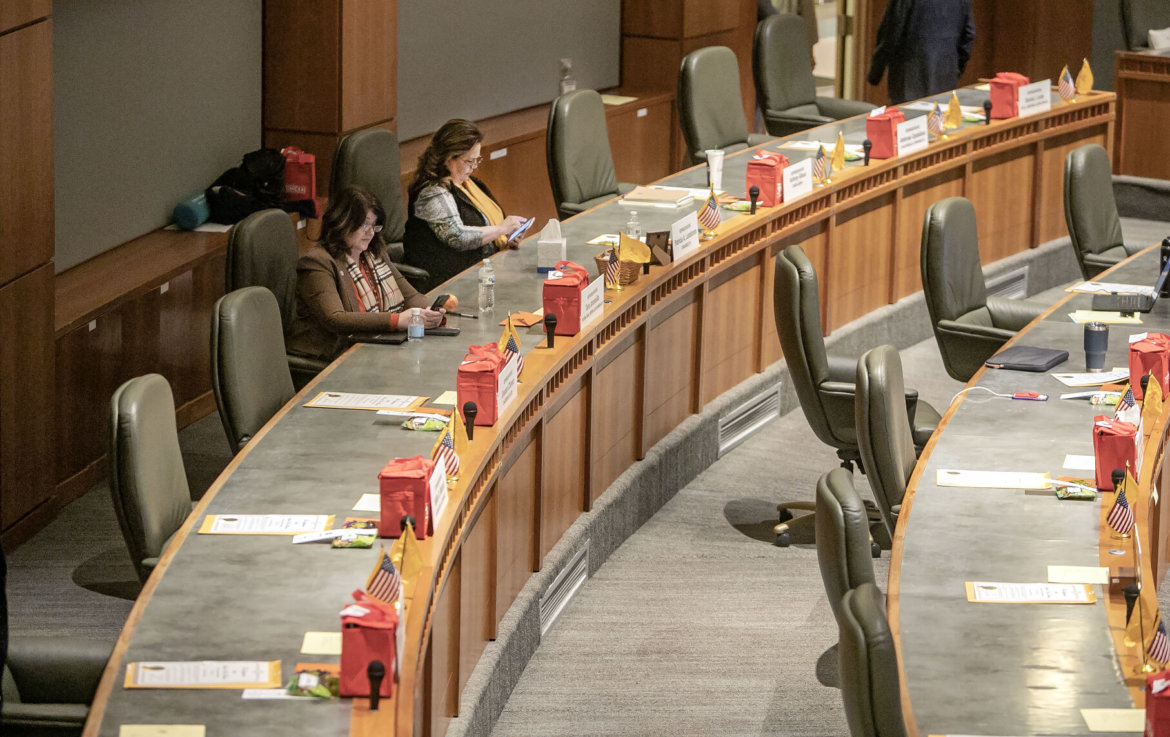 Reps. Patty Lundstrom, right, and Tara Jaramillo sit in the empty House chamber while waiting for other representatives to arrive Jan. 18 during the legislative session.

As the influential House Appropriations and Finance Committee held its first meeting of the 60-day legislative session Wednesday, a familiar face was noticeably absent.

A day after being stripped of her chairmanship, Rep. Patty Lundstrom, D-Gallup, sat at her desk in the chamber of the House of Representatives largely alone while the committee delved into the details of a budget bill a floor above.

After serving on the committee for 23 years — as chairwoman for the last six and as vice chair for eight years before that — Lundstrom said she woke up Wednesday morning feeling a little lost.

“You feel like, ‘Gosh, am I being punished? Am I being taken to the woodshed in a way where it’s forever?'” the longtime lawmaker said in an interview with The New Mexican.

“Because technically, right now, my equivalency is like a freshman,” she said. “I’m on two committees that I’m just a regular voter on after 23 years [in the Legislature].”

The decision by new House Speaker Javier Martínez, D-Albuquerque, to remove Lundstrom from her powerful and high-profile post continued to reverberate in the Roundhouse on the second day of the session as lawmakers questioned why a high-ranking member who has been lauded for her deep understanding of the state’s budgetary and financial affairs would get the boot.

Lundstrom said Martínez told her she didn’t fit his vision.

“I’m not sure what that means,” she said. “I suspect he’s going to want a chairman that does what he wants them to do.”

In a statement, Camille Ward, a spokeswoman for the House Democratic caucus, said the new House Speaker appointed eight new committee chairs “and he made those decisions based on who he thought could best serve the needs of those committees and our state going forward.”

As is common in politics, there is more backstory.

Lundstrom confirmed she nominated herself for House Speaker. Her political action committee also contributed to some conservative-leaning Democrats running against incumbents within the party during the primaries. But she speculated she stood as a roadblock to major spending initiatives proposed by Gov. Michelle Lujan Grisham amid record revenue projections for state government.

The governor’s legislative priorities — funded in part by an additional $3.6 billion in so-called new money largely fueled by the booming oil industry — include creating a new department in state government and providing full coverage of health care premiums for school personnel.

“I think part of [the reason for the committee removal] is that I’m a strong chairman, and there’s a lot of factors out there that don’t like my review process — and there’s a lot of money out there that people want to spend,” Lundstrom said. “I’m one of those people that they have to work with as the former committee chair to try to get that spent, and I’m not just going to let the spigot start flowing. I’m not going to let that happen, and I’ll be asking a lot of questions when it gets to the floor.”

In a statement issued late Tuesday, Lundstrom wrote she was “saddened and concerned that the new progressive regime has inappropriately replaced my steadfast and prudent leadership of the HAFC and [Legislative Finance Committee] in a pathetic attempt at political retaliation.

“The decision to replace me with a white man with less than a fourth of the experience in budget development is extremely damaging to New Mexico with the ever-increasing one-party system that retaliates against traditional, Hispanic, rural, Democrats,” wrote Lundstrom, the daughter of an Anglo father and a Hispanic mother.

In an interview after chairing the committee for the first time, Small said he was “incredibly grateful” to Lundstrom for her leadership, guidance, knowledge, work ethic and push for members to delve deep into different subject areas.

“Those are all incredibly strong and important sort of steps forward, and I think we’re going to build on those,” he said. “We’re going to keep many things similar, and we’re going to drive towards the best budget for all New Mexicans … knowing that this is a unique opportunity. It’s an opportunity to save for the future, to invest now in our people, in our land and our infrastructure, so I think we’ll see a lot of similarities.”

The dismay carried into the second day of the session.

“It’s hard to understand how you could replace somebody who’s been in office for 24 years or so, and she’s been on Appropriations for that long,” said Rep. Harry Garcia, also a Gallup Democrat. “How do you justify removing somebody of that caliber?”

“I’m not saying Rep. Small isn’t going to do the same, but I could not see the justification on removing her from that position,” he said. “It just flattened me out.”

“This is obviously a political move,” he said. “I think probably the Governor’s Office I’m sure was involved in this. … If you listened to what the governor said she wanted to get completed [on Tuesday during her State of the State address], I think Patty was the biggest obstacle to that.”

Nora Meyers Sackett, a spokeswoman for Lujan Grisham, said neither the governor nor her office were involved in Lundstrom’s removal from the committee.

“The governor’s office had no prior knowledge of committee chair assignments before their announcement yesterday,” Sackett wrote in an email. “The chambers of the Legislature and their leadership are wholly separate and independent from the executive.”

Lundstrom said she, too, believes she “stood in the way” of plans for big spending in the upcoming fiscal year.

“It’s been the honor of my life to be able to represent this chamber in everything budget,” she said. “It’s been an honor for me to do that, and I’ll never forget that.”

Asked what the future holds for her, including a possible run for statewide office, Lundstrom said she doesn’t know yet.

“We’ll see, but I know I’m not done,” she said. “I know there was a lot of talk at our Democrat dinner [Tuesday night] that I was going to resign. That’s nonsense. I’ve got a district to represent. I’m not going anywhere.”