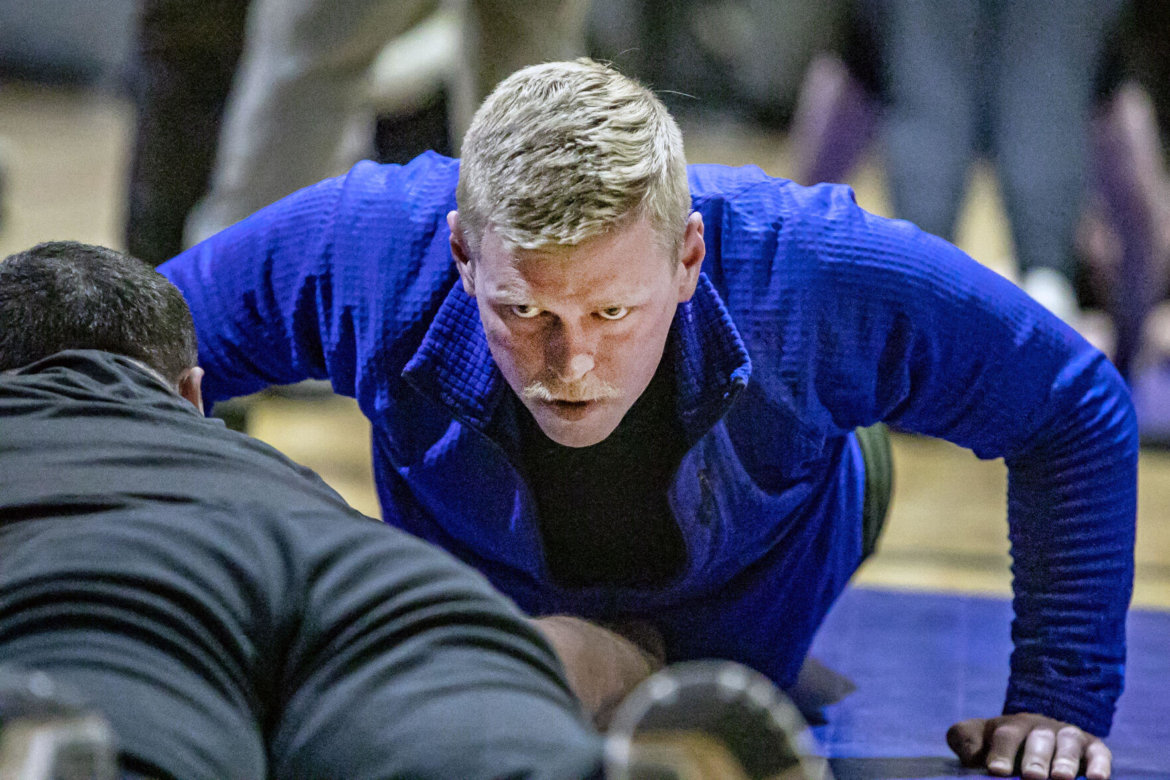 Kieffer Nymark does push-ups during the physical assessment test at the New Mexico Law Enforcement Academy on Jan. 16. Legislators are weighing many get-tough measures to address crime in New Mexico, including funding to expanding police forces.

Lawmakers from both major parties are vowing to do something this year about the crime that worries and frightens New Mexicans.

Just one week into this year’s 60-day legislative session, over 20 bills have been filed to crack down on crime, and Gov. Michelle Lujan Grisham has come out in support of ideas such as holding more suspected violent offenders in jail pretrial.

As lawmakers weigh various get-tough measures, some progressive advocacy groups hope the Legislature does more to fight poverty, help children and the mentally ill and otherwise address the systemic problems that lead to crime instead of punitive policies that, they say, haven’t worked in the past.

“We would be disingenuous if we said there is an immediate solution to this problem,” said Nayomi Valdez, director of public policy for the American Civil Liberties Union of New Mexico. “We did not get here overnight. What we see of rising crime rates is systematic of failed systems. Many of the people who are incarcerated today are the children we failed decades ago.”

Polling has shown crime to be a concern for many. A KRQE News 13 poll conducted by Emerson College Polling in September found over 65% of the 1,000 New Mexicans surveyed believed crime had risen, including 54% of Democrats and more than 80% of Republicans. Almost half of those polled said they either knew someone who had been victimized by a home or vehicle break-in over the past year or had been a victim themselves.

These concerns were on display during last year’s gubernatorial campaign, as Republicans accused Lujan Grisham of not doing enough about crime and she responded with ads featuring Democratic sheriffs touting her support for law enforcement. Lujan Grisham, who was reelected in November, vowed in her State of the State speech Tuesday to boost police funding and back new gun control laws and other tough-on-crime measures.

“We will not relent from our commitment to establish a ‘rebuttable presumption’ to make sure that high-risk violent offenders stay behind bars before trial,” she said. “We’ll tackle organized crime and the criminals who fund it through retail and commercial theft, smashing the syndicates that are terrorizing our business community. And we will continue to expand our police force to make sure our law enforcement has the personnel, training and tools to serve our neighborhoods effectively.”

Bills that have been introduced so far range from more stringent gun control measures to new penalties for those who possess a firearm while selling drugs to providing records of sales for catalytic converters. There are also a few bills to fund programs to support behavioral and mental health and substance abuse programs as a way to address societal problems that can lead people to turn to crime.

Law enforcement agencies and activist organizations have their own thoughts on what legislation they want to see passed before the session ends in mid-March. Some hesitated to say too much too soon. Others offered suggestions for lawmakers to consider.

Mendoza said he was hesitant to talk about specific bills, but he said he goes through them when they are filed and keeps track of those that may affect how he and his deputies do their jobs. He also likes to discuss bills with other sheriffs in the state, such as at the New Mexico Counties Legislative Conference, which ended Thursday.

“We go through [crime-related bills] with a fine-toothed comb and … brainstorm any issues, how these bills could be better, how we would want to approach the Legislature in reference to some of the proposed bills or for some piece of legislation that would benefit law enforcement,” Mendoza said.

Santa Fe Police Chief Paul Joye said he kept his eye on the bills that were filed before the session started Tuesday, but added he would like to see what passes before considering the effect the legislation will have on his officers. He said he doesn’t like to venture too far from the data when commenting on legislation.

Ultimately, he said, lawmakers have the final say on how crime legislation is shaped.

Meanwhile, groups such as the ACLU and New Mexico Voices for Children hope legislators will focus on preventive, long-term measures that could chip away at the systemic problems that lead to crime.

“It goes without saying we all share the goal of making our communities safe,” Valdez said in an interview.

Among other ideas, she said lawmakers should look at measures to reduce food insecurity and address mental and behavioral health problems and invest in creating more affordable and emergency housing for people who need it, including those who come out of prison and want to start their lives anew.

“What we don’t want is failed or outdated  ‘tough-on-crime’ policies or over-incarceration,” Valdez said. “We cannot afford to fall back on failed policies.”

Recent data provided by the child advocacy group New Mexico Voices for Children says 51% of families in the state struggled to pay for normal household costs while 35% reported children were sometimes or often not eating enough because they couldn’t afford enough food. Another problem is many children in the state have parents who are incarcerated, which adds to the emotional, mental and financial toll they face, said Amber Wallin, executive director of the group.

Lawmakers should look for ways to cut down on what are called adverse childhood experiences by improving economic security for families; providing protective measures for kids experiencing trauma; providing more tax credits for families and supporting early childhood education and care programs, Wallin said in an interview. She also wants the state to look at the impact parental incarceration has on families.

“In the long term, parental incarceration can take a devastating toll on kids,” she said.

Emily Kaltenbach, senior state director of the Drug Policy Alliance, said it’s important to delineate which crimes the state is trying to tackle rather than create a narrow approach to addressing all of them.

“We tend to lump all crimes together,” she said in an interview. “Are we talking about property crimes, homicides, drug crimes? There isn’t one approach to crime that will address the concerns you see in our communities.

“I understand people aren’t feeling safe in some neighborhoods and communities. We have to take that seriously. But you can’t just lock someone up forever and say, ‘That’s that.’

“And not everyone gets locked up forever.”

Those calling for more investments in social services acknowledge it’s going to take time to let those programs work.