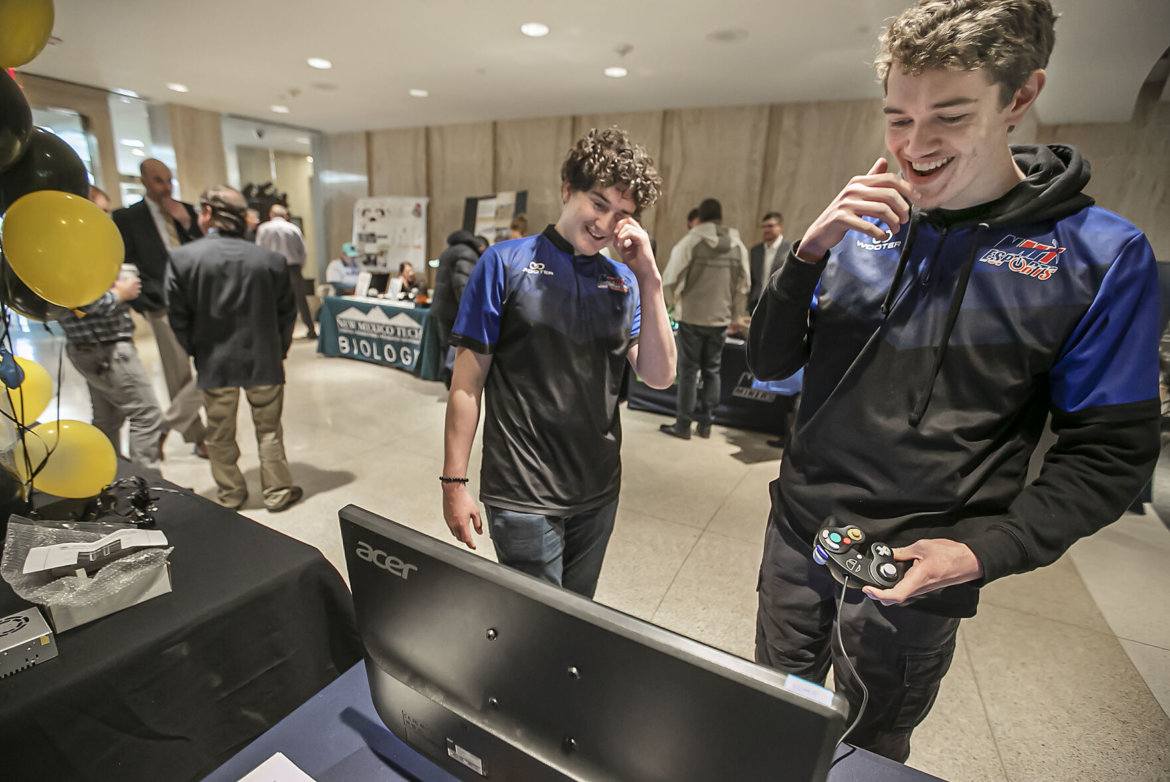 Gamers John Durfee, right, and Tyler Smith talk smack after Durfee beat Smith at a game at New Mexico Tech's E-Sports booth during New Mexico Tech & Earth Science Day in the Capitol Rotunda on Jan. 23. Museums, schools and science programs from around the state put their best STEM forward with displays of robots, spacemen and other science stuff.

Breast health: A bill that would eliminate women’s costs for breast examinations passed through its first committee hearing Monday on a 10-0 vote.

House Bill 27, introduced by Reps. Christine Chandler, D-Los Alamos, and Elizabeth Thomson, D-Albuquerque, would mandate that any group health insurance covered under the state Health Care Purchasing Act will fully cover the costs of mammograms and other types of breast examinations.

Women sometimes have to pay for such services out of their own pockets.

One woman who testified Monday before the House Health and Human Services Committee said she had to pay out about $1,400 for breast exams, which she said in some cases are necessary twice a year.

Thomson, a breast cancer survivor who chairs the committee, called the unanimous vote of support for the bill “a good way to start” the day.

The program would have the capacity to serve 14 men and 14 women at a time.

Bacon will outline the judiciary’s legislative priorities for the 60-day session and highlight accomplishments by the state court system.

The speech, scheduled to begin at noon, will be live-streamed at nmlegis.gov/webcast.

The Senate also confirmed the appointment of Kristin Tara Mora to the board.

Senate President Pro Tem Mimi Stewart, D-Albuquerque, said a confirmation hearing in the Senate Rules Committee earlier in the day revealed a number of senators have family members who are deaf.

“We learned so much about the school this morning,” she said. “It was a wonderful way to start Monday.”

Moon walk: No, that wasn’t the ghost of the late American astronaut and aeronautical engineer Neil Armstrong walking the halls of the state Capitol Monday. Rather, it was Michael Shinabery, an instructional coordinator for the New Mexico Museum of Space History in Alamogordo, dressed in a replica of Armstrong’s space suit — right down to the name tag.

Shinabery said Armstrong and other astronauts came to New Mexico to train for various Apollo flights to the moon.

As spacecraft commander for Apollo 11, the first manned lunar landing mission, Armstrong made history as the first man to walk on the moon in 1969.

The second man to step foot on the moon, former astronaut Buzz Aldrin, just made headlines Friday when he married Anca Faur on his 93rd birthday.

Monday was the New Mexico Institute of Mining and Technology’s Tech and Earth Science Day at the Capitol, and the Rotunda was full of science-related presenters and events.

Quote of the day: “I think we’re on the naughty list probably more than anyone here, so let’s start spending some money out there.” — Sen. Crystal Diamond, R-Elephant Butte, referring to millions of dollars in unspent capital outlay tied to the Spaceport Authority.