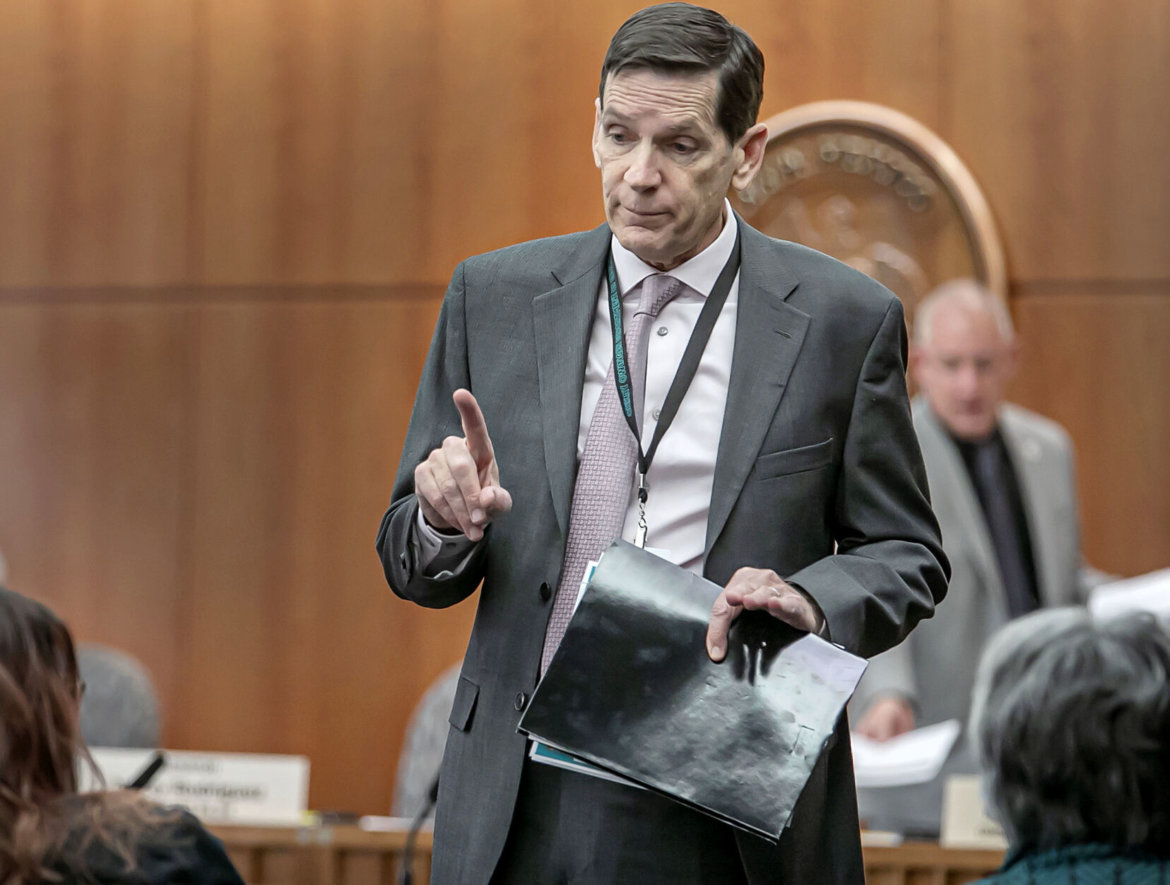 Public Education Secretary Kurt Steinhaus waits to speak with lawmakers on the Senate Finance Committee during high-level budget talks at the state Capitol on Jan. 23.

A showdown is brewing between the executive and legislative branches of government over two of Gov. Michelle Lujan Grisham’s legislative priorities: free meals for students and paying for teachers’ health insurance premiums.

While the governor’s executive budget recommendation includes funding for both initiatives, the spending plan put forth by the Legislative Finance Committee doesn’t have funding for either.

The chairman of the powerful Senate Finance Committee called the $100 million proposal to cover the cost of health insurance premiums for all school personnel unsustainable.

“It’s not well vetted,” Sen. George Muñoz, D-Gallup, said after the committee examined the differences between the two spending plans.

“The governor is going to have to convince us that it’s sustainable and won’t create inequities within agencies that don’t get their health care paid for,” he said.

A spokeswoman for the governor did not return a message seeking comment late Monday.

Simon Miller, an analyst with the Department of Finance and Administration, said a typical Level One teacher would save, on average, about $4,000 a year if the state picked up the cost of health insurance premiums.

Muñoz noted the governor’s proposal comes a year after the state increased teacher pay. Public education represents about 45 percent of the state’s budget, a number that moves to 53 percent when higher education is included.

Both the governor and the Legislative Finance Committee are recommending another round of pay raises not just for educators but all state employees in the upcoming fiscal year. The governor’s proposal calls for 4 percent raises while the LFC recommended raises of 5 percent, plus targeted increases for hard-to-fill positions.

Another subject of debate will be the governor’s proposal to provide students free breakfast and lunch at school.

The governor’s proposal calls for $30 million for free school meals for students regardless of family income.

“Right now, too many kids are forced to learn on an empty stomach,” she said during her State of the State address. “With this program, New Mexico is literally providing food for thought.”

The LFC budget recommendation, however, doesn’t include funding for the governor’s proposal.

“There’s a special appropriation focused on ensuring that the meals that we are serving are high quality for $7.5 million,” said Charles Sallee, the LFC’s deputy director for budget, said during a Senate Finance Committee meeting. “There was some discussion in LFC about the ability of school districts to do universal school lunch now and draw down federal funds, so that’s something that we would look to be supportive of for districts to do, as well as grants to be able to enhance the quality of free lunches.”

Sen. Michael Padilla, D-Albuquerque, who will be carrying the legislation, said the issue will need to be ironed out.

“I know it’s very early, and we need to figure that out, but the recommended amount is $30 million,” he said. “We’ll have to get our hands around that as we move forward.”

“Where you’re going to see differences is how you get there,” he said. “The what, there’s agreement. The how, there’s some disagreement.”

In an interview afterward, Steinhaus said everyone wants New Mexico’s students to learn.

“I call it moving the needle on achievement,” he said. “We want them to be happy and healthy in school, so everybody agrees on the what. The details of how you get there, there’s some other ideas, which is good. This is a healthy debate. That is what democracy is all about.”