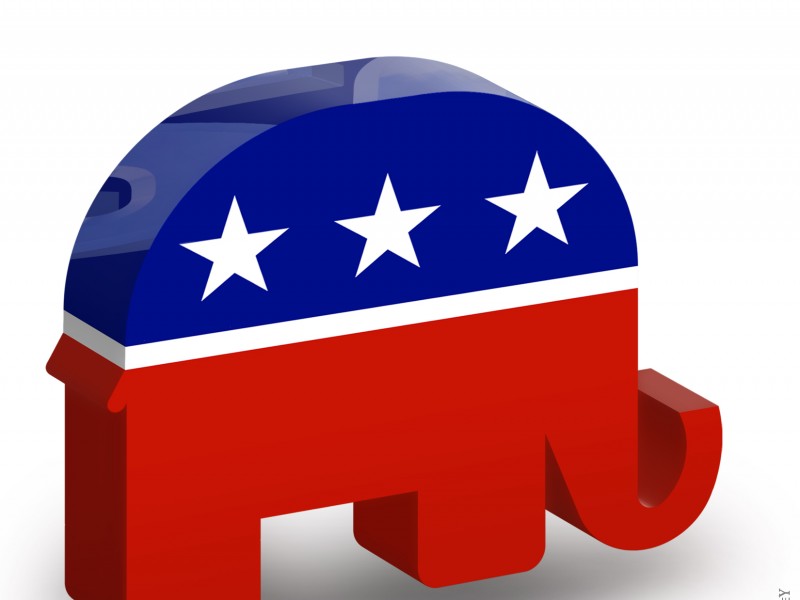 After lashing out on Facebook at “leftists” for “getting exactly what they asked for” just a day after a rally of white supremacists in Charlottesville, Virginia turned violent, Doña Ana County Republican Party chairman  Roman Jimenez has resigned. Jimenez  posted  his thoughts on the county party’s Facebook page. Almost immediately, people across the state called for Jimenez to resign or for the county party to remove him from his position. Criticism came from Democrats and Republicans alike,  including the state Republican Party chairman. On Tuesday afternoon, Victor Contreras announced he would take over the Doña Ana County chair position until the county central committee meets to find a permanent replacement. 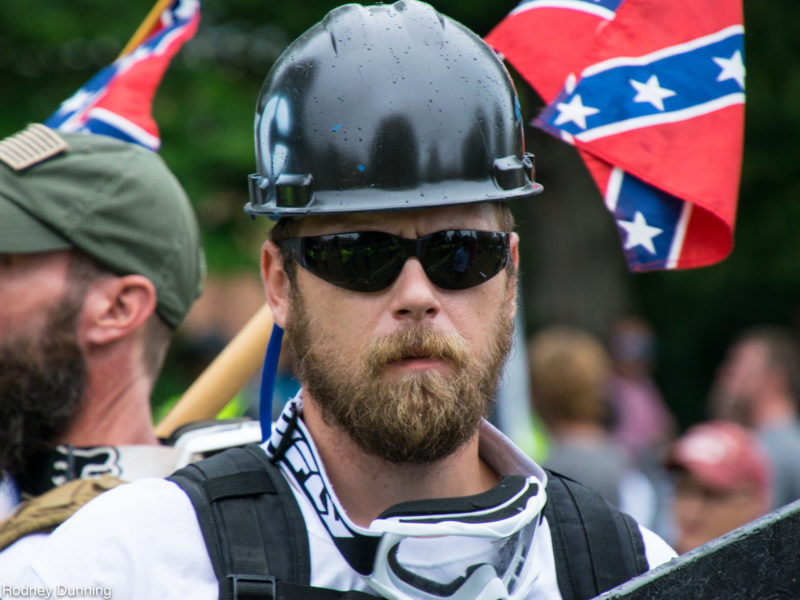 A new generation of white supremacists emerges in Charlottesville 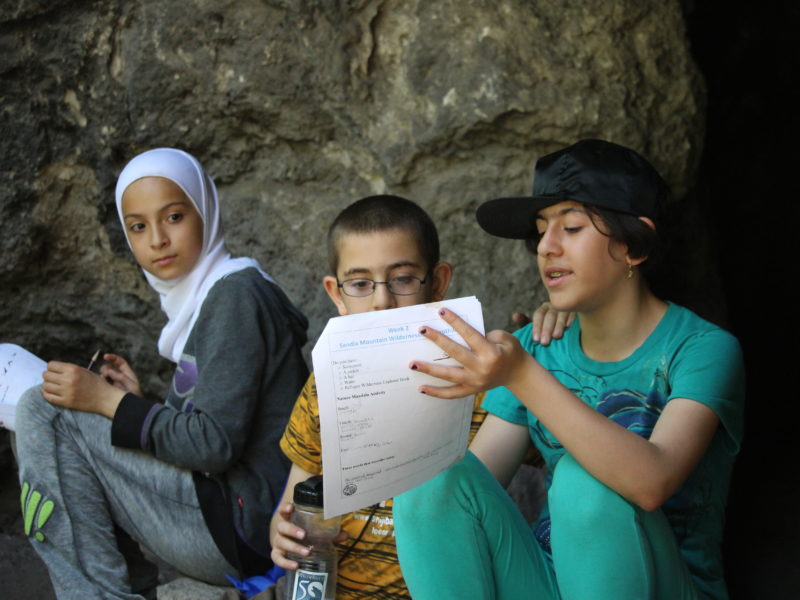 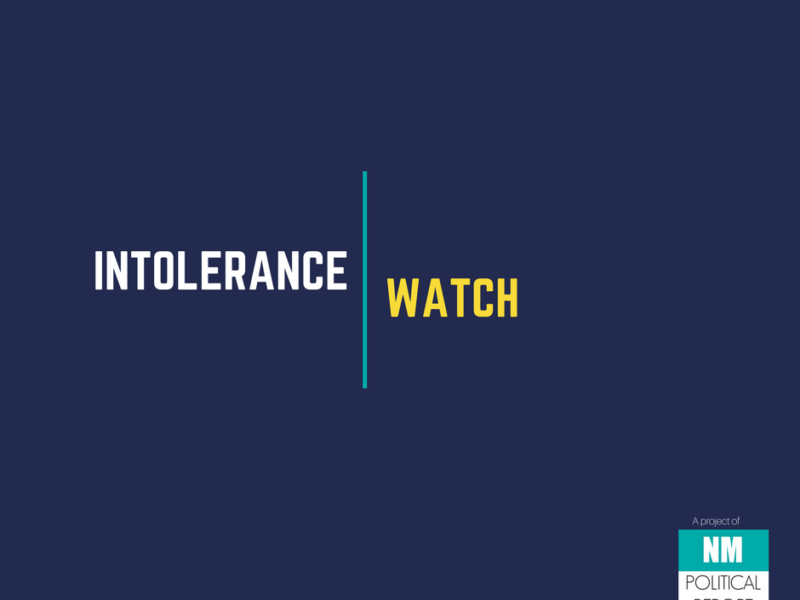 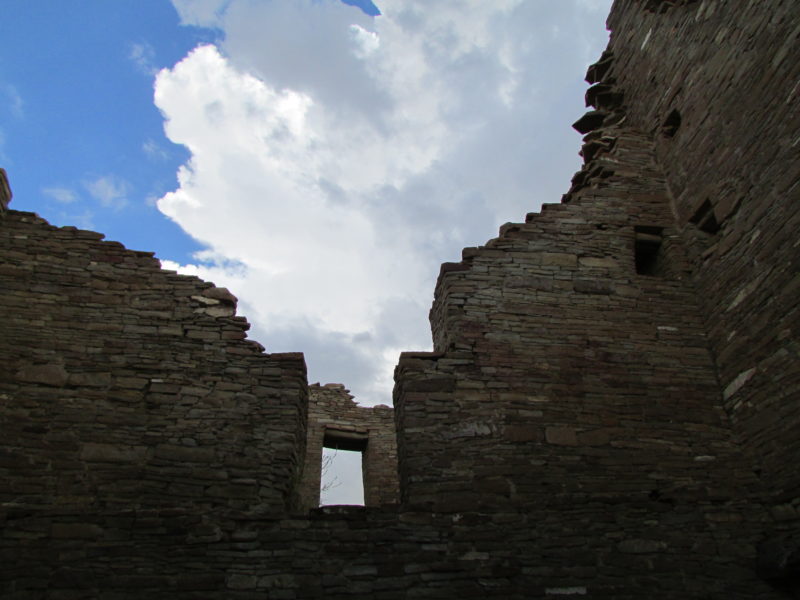 A mosque in Clovis was vandalized with graffiti this weekend, purportedly by “A real christian.” “Happy Birthday Jesus Christ from a real christian” was written in spray paint on The Golden Mosque in Clovis, NM. It is the only mosque in the eastern New Mexico city. Blue spray paint with “Trump” was sprayed twice near the door. According to The Eastern New Mexico News, Dr. Mahamadu Fuseini, a cardiologist by trade, oversees the mosque, which is inactive for most of the week.

Neighbors in Albuquerque concerned about swastika

A Nazi symbol displayed in the window of an Albuquerque home has neighbors upset. KRQE-TV reported that a swastika flag was displayed at a westside house. The house is near Unser and Ladera and one neighbor, who said they were part of a bi-racial family, said it disturbed her. “My grandkids live with me. I don’t want them walking by and seeing that, or having to be afraid to walk down the street,” Dawn Candelaria told the TV station.

Sunday night in Albuquerque’s Old Town Plaza, the high staccato murmur of a toddler walking circles around the plaza hardly broke the silence of the approximately 200 people sitting in the grass and on the low walls around elm and cottonwood trees. People gathered to spend an hour in silence, in response to the weekend’s violence in Charlottesville, Virginia during a white supremacist rally. Occasionally, a dog yapped or a motorcyclist gunned his motor. Some people closed their eyes, while others looked toward the sky or watched the two people meditating silently in the plaza’s gazebo. There were sniffles and coughs and the muted clink of glasses being cleared from the patio at a restaurant on the edge of the plaza.

After a white supremacist rally in Virginia, during which a woman was killed and over a dozen people injured, a Republican Party county chairman lashed out at “leftists” and George Soros. A now-deleted statement on the Facebook page of the Doña Ana Republican Party attributed to chairman Roman Jimenez blamed “leftist protesters” for violence and said “they’re getting exactly what they asked for.”

Republican Party of New Mexico chairman Ryan Cangiolosi said on Twitter he “fully repudiates Jimenez’s statement, which does not reflect the views of the RPNM or the Repub Party of Doña Ana County.” Here is the full statement from Jimenez:
These violent, leftist protesters are the brainless robots that are created by evil Soros money. The white ones have been taught to hate their color, the women are taught to hate men, black and minorities want to kill whites and police. They then have the audacity to call conservatives racist.

The Bernalillo County Commission reiterated its commitment to being an immigrant-friendly community. On Tuesday night, commissioners voted 4-1 against a provision that would have rolled back that status. County Commissioner Wayne Johnson, a Republican who is running for Albuquerque mayor, introduced a proposal to bring the county in alignment with the federal government’s current policy on detaining people who are in the country illegally. “There is nothing in this resolution that directs or even implies that the Bernalillo County Sheriff’s Department should be enforcing federal immigration law,” Johnson said. “Everything in this resolution puts the burden on the Department of Homeland Security and on Immigration and Customs. It allows access to detainees, identified by the DHS, and it allows notification when those identified detainees will be released 48 hours prior and then it would allow, in the very specific condition, for us to hold someone for 48 hours if the Department of Homeland Security agrees to indemnify the county against liability.”

Johnson’s proposal would have rescinded a resolution passed by the commission earlier this year that declared the city immigrant-friendly.

More than half of the people who said they were the victim of a hate crime in recent years did not report the incidents to police. When victims did report to the police, their assailants were arrested in just 10 percent of the cases. The incidents reported as hate crimes were almost always violent (90 percent) and often seriously so, with nearly 30 percent involving reports of sexual assault, aggravated assault and/or robbery. Those are some of the striking findings of a special federal Bureau of Justice Statistics report released Thursday, based on national crime victimization surveys conducted for the years 2011 to 2015. The report came as the Department of Justice convened a hate crimes conference in Washington, D.C. Attorney General Jeff Sessions spoke at the start of the conference and repeated his pledge to combat hate crimes aggressively.

At least two Iraqi refugees in New Mexico could be deported following a recent repatriation agreement between the U.S. and Iraq. But the American Civil Liberties Union is attempting to prevent that from happening. The New Mexico chapter recently weighed in after the federal Immigration and Customs Enforcement (ICE) in Michigan detained nearly 100 Iraqi nationals. A federal judge in Michigan earlier this month temporarily blocked deportation of Iraqi nationals, whom the ACLU has argued would face danger if deported back to their country of origin. Monday night that same judge extended the stay against deportation to all Iraqi-born people affected across the country, including at least two in New Mexico.

Ahead of a candlelight vigil at Morningside Park Thursday evening before this week’s Albuquerque Pride, marchers for transgender rights rallied in the park. The pro-transgender rights march has been a part of the candlelight vigil for the better part of a decade. Albuquerque Pride itself has been around for 41 years now. Featured: Longtime organizer looks back at four decades of ABQ Pride

“It reminds me that I’m very lucky,” Janice Devereaux, who came out as a transgender woman 15 years ago, said in an interview. “As tough as life can be for trans people at times, I’m still lucky to be here, and that is very important for me to hold on to.”

The candlelight vigil is held every year to honor LGBT victims of hate crimes.

Two advocacy organizations filed discrimination complaints against an Albuquerque Walgreens pharmacy for allegedly refusing to fill a birth control prescription. The complaint, sent to the New Mexico Human Rights Bureau, was written by the American Civil Liberties Union of New Mexico and the Southwest Women’s Law Center. The organizations allege a pharmacy employee at a store on Coors Boulevard refused to fill a misoprostol prescription to a teenage woman who was at the store with her mother last August, citing personal reasons. This refusal, according to two complaints, violates the New Mexico Human Rights Act, which bars discrimination based on sex. “Refusing to fill prescriptions that are directly tied to the attributes that make women different from men—i.e. the ability to become pregnant—constitutes sex discrimination,” the complaints read.

A group of transgender women detained by U.S. Immigration and Customs Enforcement were recently transferred to New Mexico from a detention center in California. In a detention center in Milan, the women are housed in a pod together. ICE transferred the dozen or so women in early May to Cibola County Detention Center in Milan from a similar facility in Santa Ana, California, where ICE made its first dedicated transgender module. Since then, advocacy organizations for immigrants and transgender rights in New Mexico have taken notice. Adrian Lawyer, co-director of the Transgender Resource Center of New Mexico, said his organization reached out to the detainees and recently toured the Cibola County facility.