It’s a change in pace from the shopping frenzy and chaos of Black Friday and the less-frenzied Cyber Monday. Instead it’s a day to give back to the non-profits and causes you care about most.

*Donate through Facebook donations for #GivingTuesday and your donation
To the Political Report will be doubled by the Bill & Melinda Gates Foundation.

This past weekend, New York Times columnist David Leonhardt praised us as one of the 5 best local news outlets in politics.

Why is supporting us so important? We write about important stories no one else will.

Earlier this year, Laura Paskus traveled to Spaceport America for an interim committee hearing where legislators were hearing an update on a vitally-important lawsuit over water rights between Texas and New Mexico. 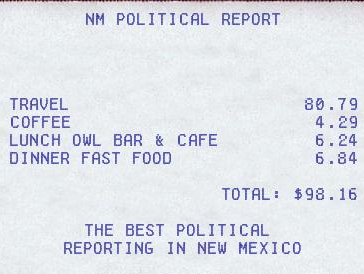 As the only reporter in the room, Laura heard, and reported on, what officials were telling legislators about the lawsuit. Once that meeting was over, she bolted over to

a public meeting in Socorro, and reported what state officials told the public about a controversial San Augustin Plains water deal.

To do this, we had to travel hundreds of miles. It ended up costing $80.79 in mileage. Not to mention money for food, like a stop at the Owl Bar & Cafe in San Antonio for a $6.24 green chile cheeseburger (because when you are in the area, you have to stop there for one). Plus a quick dinner in the car on the way back to Albuquerque, and a coffee for the drive. These are the costs of reporting these important stories.

Donate to keep our award-winning reporting going!
Donate via Facebook or PayPal now

This month, Andy Lyman didn’t leave the city of Albuquerque—but spent two weeks covering the trial of a former resident at UNM Hospital who said her bosses dismissed her from the program after she told officials she was raped by a colleague. Lyman was the only reporter in the courtroom every day (well, except the one day the judge didn’t let him in for jury selection) and he filed updates each day.

These are stories and coverage that you’ll only get from NM Political Report. We’ve proven that over the last three years.

So we ask that you help us do these important stories and more in the future—we’d like to expand our team and expand our coverage of underreported topics.

Double Your Impact
Your #GivingTuesday donation via Facebook matched
By the Bill & Melinda Gates Foundation.

If you prefer to donate by mail, you can send a check made out to NM Political Report and we’ll count it towards our #GivingTuesday goal. Just drop it in the mail to: