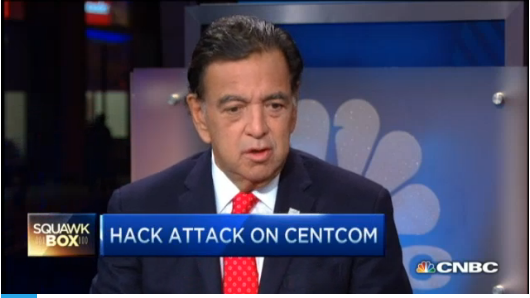 Richardson is a former United States ambassador to the United Nations in addition to being a former governor, U.S. Representative and Department of Energy secretary.

“This is serious. Even though the hacking didn’t go into national security, didn’t go into security breaches, classified information, the fact that it’s happening so extensively and vastly means that we have to get a cybersecurity policy in place,” he said in a “Squawk Box” interview. “We need to get our allies dramatically involved. We need to get some of the Arab states to cooperate, too, because this is getting out of hand.”

The full video is available below.

Others aren’t so clear that the hack of Twitter and YouTube pages means anything big in the scheme of things.

A writer for Wired noted nothing sensitive was released in the hack by apparent ISIS sympathizers.

Frankly, given the immense opportunity the hackers had holding such an impressive mic for around 40 minutes, the content itself was rather disappointing. Indeed, that one of the first tweets sent out was a picture of a goat points to this hack being more about shits and giggles than any highly organized campaign of attack linked to the broader ISIS network.

Now this isn’t to say the piece’s author, (Wired says, “Peter W. Singer is Strategist for the New America Foundation and the founder of NeoLuddite, a technology advisory firm”) says it meant nothing.

Just as social media plays a role in shaping real wars, politics, and business today, so does a hack like this signify more than bluster. This hack was highly embarrassing for US Central Command, all the more so for taking place at the very moment the President was speaking on the importance of cybersecurity. In addition, the likely low-level way the hackers got in is very embarrassing and likely consequential to whoever had the keys to the CENTCOM accounts (one imagines them now awaiting reassignment to the Arctic).

Vox even pointed to this comic from the popular XKCD to

There is another New Mexico connection beyond Richardson appearing on national TV to talk about it.

As in the CENTCOM hack, the hackers posted what they claimed to be confidential documents. In the Albuquerque Journal Twitter and Facebook hack, this included numerous pictures of actor Denzel Washington.

The Albuquerque Journal website itself had been hacked in late 2014 with a pro-ISIS statement.

It isn’t clear if this is actually the work of supporters of ISIS, though experts point out that group does not refer to itself as ISIS.