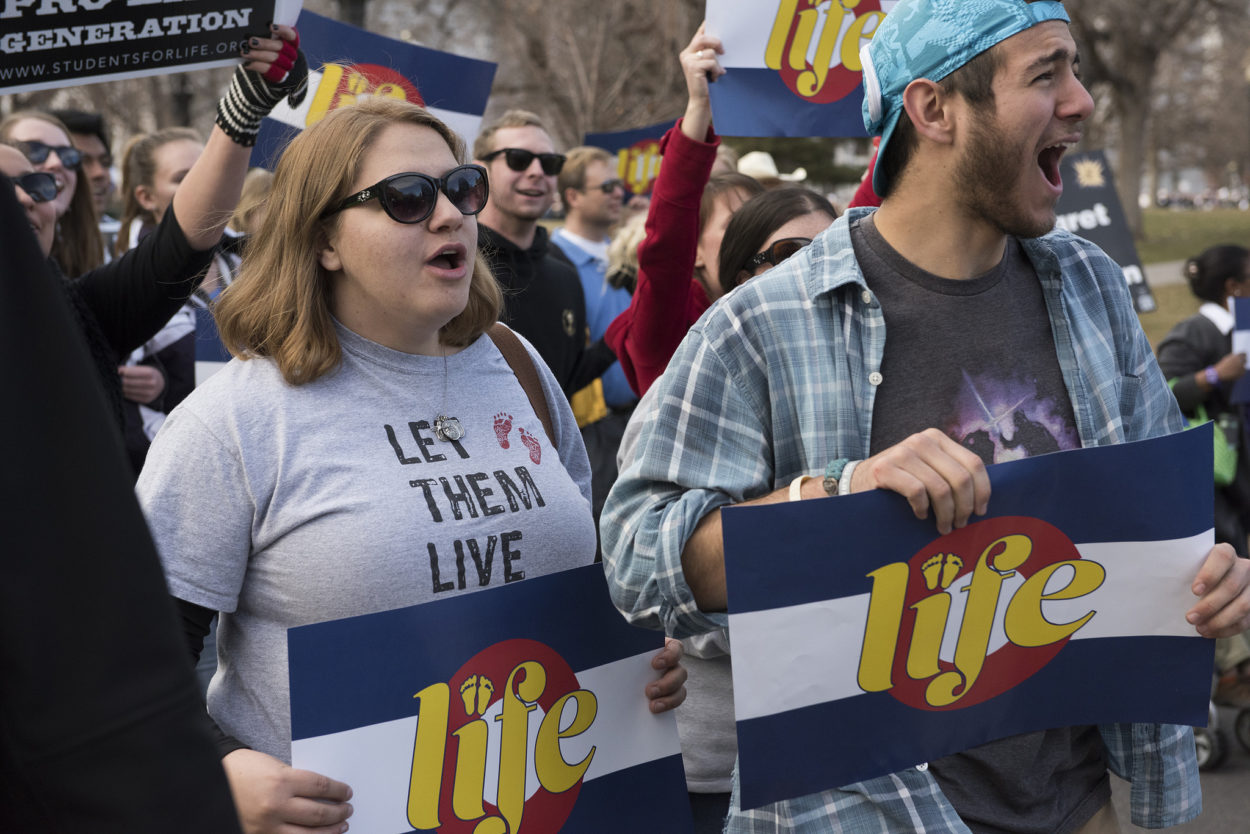 Demonstrators at Colorado's March for Life on Jan. 17 are among abortion opponents rallying nationwide this week. (Photo Credit: March for Life Colorado 2015)

The New Mexico Legislature’s opening week coincides with the anniversary of the polarizing Roe v. Wade Supreme Court decision, and activists who oppose abortion say they hope this session will shift state laws in their favor.

Formed after Albuquerque voters defeated a ballot measure to restrict abortion services in the city, Protest ABQ has plans to take advantage of the newly Republican-controlled House of Representatives by pressuring lawmakers into votes on statewide restrictions.

As of press time, no abortion rollback measures have been proposed. That could change quickly if Father Stephen Imbarrato and the activists he helps coordinate have their way.

Imbarrato is a Catholic priest whose accent and straight-up, conversational style harken back to his New York roots. He spent five years traveling back and forth to New Mexico leading ministries before he decided to settle here permanently a decade ago. He was the long-time director of Project Defending Life, described by Imbarrato as one of largest pro-life ministries in the state. His heart is in that kind work, he says, “not direct political lobbying or that type of stuff.”

In the last couple of years, however, Imbarrato has combined efforts with Tara and Bud Shaver, a married couple trained by Operation Rescue before they moved to New Mexico to push back against local abortion policies. Imbarrato and the Shavers helped spearhead the 2013 Albuquerque referendum aimed at banning abortions for women past 20 weeks of pregnancy. The measure failed at the polls.

Tara Shaver says the aims of Protest ABQ are straightforward: “It’s an effort to protest and expose those who profit from, support and condone abortion in the state.”

To that end, the group’s members demonstrate outside abortion clinics and have also expanded their activities to a campaign they refer to as “neighborhood awareness.” This includes picketing the residential areas of specific individuals, such as the CEO of the University of New Mexico Hospital. UNMH administers a women’s clinic that provides abortions for women up to 22 weeks pregnant, among other reproductive health services.

Says Shaver, “we always have the hope that our protests would spur people on in other states, and then culminate in a national protest and national strike, which we believe is really needed to once and for all shut the country down and really wake the country up to what’s happening.”

This year, in addition to the annual March for Life rally in Washington (which includes satellite demonstrations elsewhere), Shaver and other activists are calling for a national anti-abortion strike on January 22 and 23.

“It’s time for the American people to be inconvenienced,” says Shaver. “It’s time for us to halt everything and become incredibly inconvenient to the point of action and outcry so that this will finally come to an end.”

Lalita Russ got engaged in reproductive health activism during the run-up to the 2013 referendum in Albuquerque, volunteering as part of the Respect ABQ Women coalition that opposed the initiative. Today she’s a staff field organizer for Planned Parenthood. She says she hopes lawmakers base their decisions this year on medically sound facts, particularly when it comes to health care needs of women.

In light of attempts by folks seeking to restrict abortion, including through legislation for stricter regulation of clinics, Russ says that “it’s really important to remember that abortion’s one of the safest medical procedures a person can get in our country.”

She and other reproductive health advocates point out that abortion providers are already heavily regulated by both state and federal agencies in addition to medical licensing boards.

Russ says she expects to see attempts this session to mandate parental notification or even judicial involvement for minors seeking abortion.

“I’ve got a younger sister, and I understand the concern parents have,” says Russ. She adds that research shows the vast majority of young people do consult with a trusted adult for advice about unwanted pregnancy. Parental notification laws affect a minority of young people who have no one to turn to, says Russ.

She points out that The American College of Obstetricians and Gynecologists and the Academy of Pediatrics have both opposed legislative attempts in other states to force parental notification for minors seeking abortions.

“You want them to be able to build trusting relationships with adults,” says Russ, “whether it’s faith leaders in our community or family members. That kind of trust and that kind of relationship really can’t be legislated. Politicians can’t make that kind of decision.”

Demonstrators at Colorado’s March for Life on Jan. 17 were among abortion opponents rallying nationwide this week. (Photo Credit: March for Life Colorado 2015)

When asked whether Protest ABQ includes in its work any advocacy for legislation separate from the abortion issue, such as specific services to support women before, during or after pregnancy and childbirth, Imbarrato says “not so much now.” He cites his past work at Project Defending Life, which he says offers support to women experiencing “difficult” pregnancies.

He does emphasize, however, that an instrumental component of his group’s mission now includes plans to apply public pressure to help ensure New Mexico’s pro-life elected leadership aligns rhetoric with their actions.

“Those who support abortion, who are very adamant about it, they talk the talk and walk the walk,” he says, adding that it’s not always that way on his side of the issue. Anti-abortion activists are hesitant to adopt words like “protest,” he says, a tendency he and the Shavers are trying to change, including among politicians who garner donations, votes and offices based on their pro-life stances.

“They should do something to manifest or earn those credentials,” says Imbarrato.

Protest ABQ has already taken Gov. Susana Martinez to task for what the group has characterized as her passive stance when it comes to abortion access in New Mexico. Protestors raised the ire of Martinez’s top aid Jay McCleskey when they showed up in his neighborhood in June. Protest ABQ also made its presence known at Martinez’s second-term inauguration.

“We know that Jay is behind her strategy to hear nothing, see nothing, say nothing [regarding abortion],” says Imbarrato. “This strategy is all about her national aspirations. But what right do you have to have national aspirations when you’ve really put together a false record of meaningful accomplishments?”

He adds that anti-abortion activists “really feel that Gov. Martinez has been a huge failure in every respect as far as that goes.”

Says Shaver, “either you’re pro-life, and you want to protect women and babies, or you’re not. We’re just going to continue to call her out, and we expect her to do the right thing for the women and children of New Mexico.”

Both Imbarrato and Shaver say representatives in New Mexico’s House and Senate who label themselves pro-life can expect the same brand of pushback.

“I just want to make it clear that we want something to be done this session,” says Shaver. “If we’re not happy with the way things are going, then we will apply pressure.”