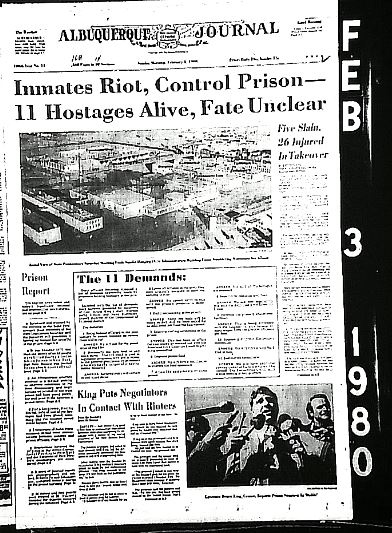 The February 3, 1980 front page of the Albuquerque Journal.

The House and Senate each passed memorials remembering the riot, which some said were long overdue.

The riot took place on February 2, 1980. A total of 33 inmates were killed, many brutally, and a dozen corrections officers were taken hostage. Overcrowding and other conditions at the prison were blamed for causing the riot.

“When I left that prison I told myself I never, never will go back and work in corrections,” Alcon said.

Alcon said that legislators needed to remember to fund correctional facilities and pay correctional officers what they pay.

“The laws that we pass in this legislature is what causes the population of those prisons to be occupied,” Alcon said.

Sen. Richard Martinez, D-Española, also worked at the State Penitentiary but as support staff, not as a corrections officer. He said that the memorial was “long overdue.”

“I think that a lot of the guards that served there and a lot of the state police officers that went into protect the staff and the guards were also left with a very traumatic situation with PTSD and a lot of other issues,” Martinez said. He said he didn’t think that the state had “stepped up to the plate” to make sure they “get the medical attention they so deserve.”

Senate Majority Leader Michael Sanchez, D-Belen, agreed with Martinez that it was overdue.

Rep. Jane Powdrell-Culbert, R-Corrales, sponsored the legislation in the House and mentioned her work with corrections officials for 25-30 years.

“Not only did we not have to leave the responsibility to those who were working in the facilities but also to get the communities involved in the reintegration of the individuals who were coming out of the prison,” she said.

Gov. Bruce King called in the state National Guard to restore order. Some National Guardsmen feel they have been forgotten in the decades following the riot.

Sen. Nancy Rodriguez, D-Santa Fe, said that her husband was in the National Guard and responded to the riot.

“I didn’t hear from him for days,” Rodriguez said. “I can tell you it, obviously, wasn’t a very good scene.”

The memorials passed each chamber unanimously.

Memorials are non-binding pieces of legislation.