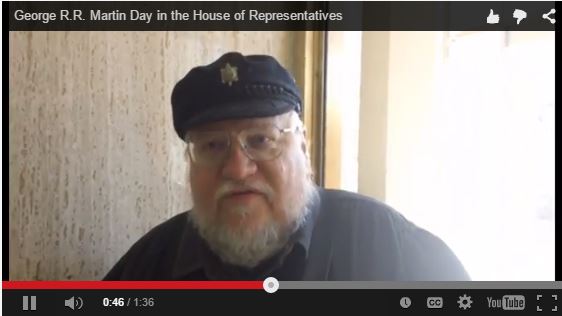 It’s not uncommon for lawmakers to invite high profile guests to the New Mexico Legislature. In previous years guests have included an Albuquerque baseball mascot and a famous bounty hunter. On Wednesday, Rep. Bill McCamley, D-Mesilla Park, invited famed author and Santa Fe theater owner George R.R. Martin. Besides being the author of the popular A Song of Ice and Fire series that inspired the HBO show Game of Thrones , Martin also owns the Jean Cocteau Cinema in Santa Fe.

Last year, when Sony Pictures announced it would not release the Interview, a film critical of the North Korean government. The production company cited cyber-attacks as the reason for halting the release.

Martin lobbied to show the film at his theater. The  Jean Cocteau Cinema showed the film on Christmas Day while many theaters across the country did not.

McCamley told the House that it was for that reason that Martin should be recognized. The lawmaker said Martin stood up for the rights of Americans by showing the movie when many wouldn’t. With a unanimous vote and a round of applause, the House agreed.

Before the vote, New Mexico Political Report spoke with Martin on the honor and why he decided to show the movie.

Martin said he would only talk about The Interview and his decision to show it at the Jean Cocteau Cinema and not about his upcoming book, Winds of Winter.