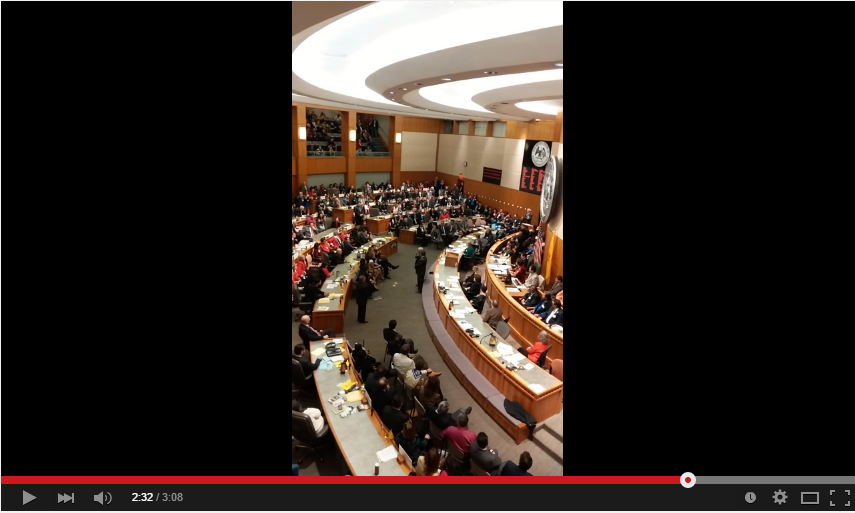 John Pinto sings The Potato Song in front of a joint session of the New Mexico Legislature.

The legislators presented Pinto with a certificate honoring him and recounted his time as a Code Talker to his famous story of hitchhiking to his first legislative session in 1977. He was picked up, as Rep. Roger Madalena, D-Jemez Pueblo, recounted by Manny Aragon in Bernalillo. Aragon was another newly-elected state senator who went on to be one of the most powerful political figures in the state.

Pinto was trained as Code Talker, but World War II ended before he was deployed.

The Potato Song is an annual tradition that Pinto sings, usually in front of the Senate. Lt. Gov. John Sanchez needled the House, saying it was a reason why the Senate was superior.

Pinto thanked many people ahead of singing his song, including Gov. Susana Martinez who sat just feet in front of him. He thanked her for funding in his area of the state.

“We won’t have to cry for the money anymore,” he joked.

Note: I fully acknowledge my mistake in shooting the video vertically. I’ll blame unfamiliarity with my new phone, as I did not make that mistake in 2012.

The singing of The Potato Song starts shortly after the 2 minute mark in the video.