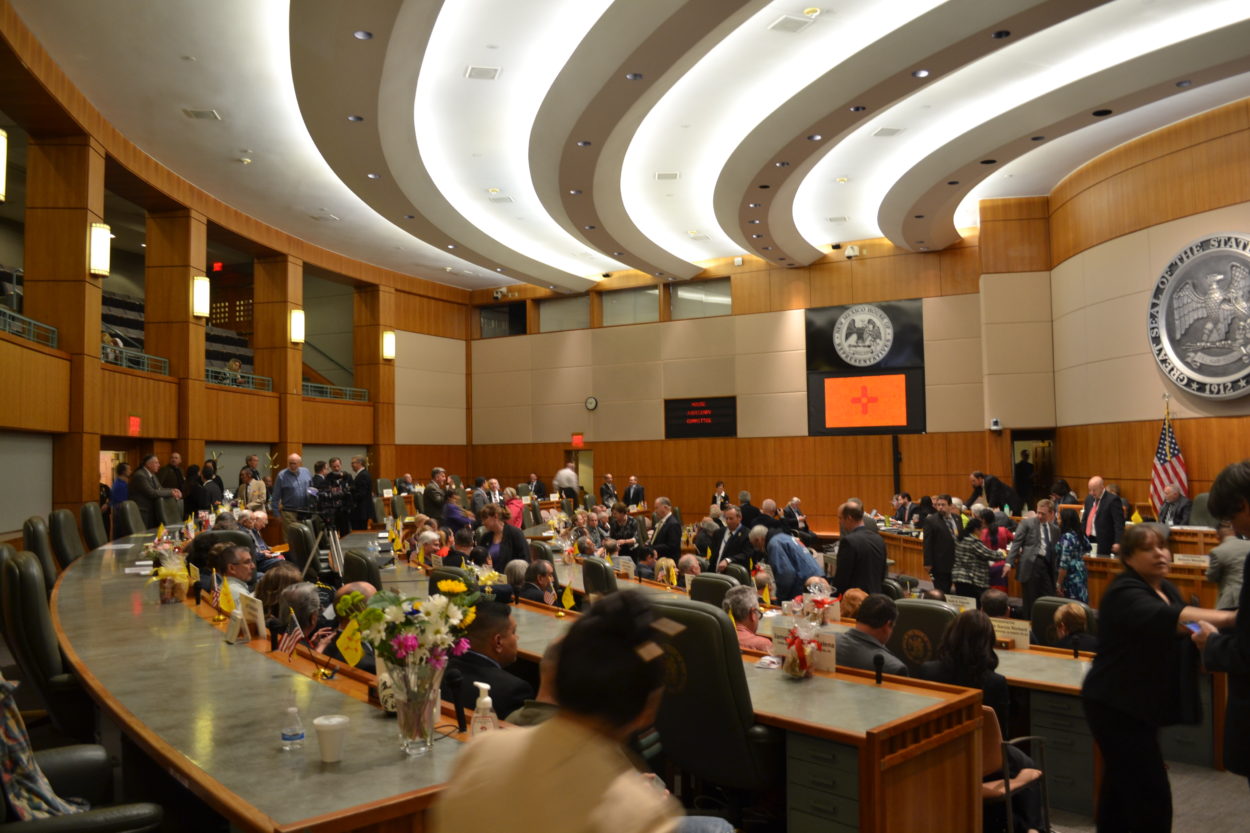 After a committee hearing that lasted more than five hours, right-to-work legislation remains in committee. With over four hours of public comment, the committee decided to debate HB 75 on Friday.

The meeting got off to a rocky start. Originally scheduled for a committee room with a maximum occupancy of 120 people, the meeting was moved to the House floor about ten minutes before the meeting’s scheduled start. The move was to accommodate the large crowd.

After a quick move, the next speed bump came when the bill’s sponsor, Rep. Dennis Roch, R-Logan, announced he had drafted a substitute bill.

Rep. Brian Egolf, D-Santa Fe, addressed Committee Chair, Zach Cook, R-Ruidoso, and said the substitute was not given to the committee in advance. Substitute bills are not uncommon in committee meetings, but this year in at least one committee, a chair asked committee members to submit any proposed changes to bills at least 48 hours in advance.

Egolf and other Democratic members argued that only Republicans have been allowed to make last-minute changes, a claim Rep. Nate Gentry, R-Albuquerque, said was untrue. Gentry said the committee has continually accepted “on-the-fly” amendments.

“The notion that this is a travesty is disingenuous,” Gentry told the committee.

After some debate, the committee decided to hear the bill.

Those in favor of right-to-work spoke for almost an hour.

Most of those in favor the proposed legislation were business owners  or leaders of business advocacy groups. Also among the speakers were a college student, a recent college graduate and a state employee.

State Personnel Interim Director Justin Najaka told the committee many workers will not speak out in favor of right-to-work because they are afraid of retaliation.

Those opposed to right-to-work laws echoed previous sentiments and spoke for more than three hours. They told the committee that unions are good for the state and the legislation is inherently anti-union.

After almost five hours of public comment, close to an hour from those in favor of right-to-work and more than three hours from those opposed the committee, Cook took suggestions from the committee on how to proceed. The conversation centered on when the committee would debate the bill and whether the debate would center around the original bill or Roch’s substitution.  The final decision from the committee was to reconvene on Friday.

Right-to-work legislation has been a big issue during the 2015 legislative session. Supporters have argued that it is necessary for New Mexico to attract out-of-state businesses. Many have said that major companies will not even consider states without right-to-work laws. Opponents have claimed that by limiting unions’ ability to represent employees and that it is not a deciding factor for relocating businesses.

Currently, the federal Labor Management Relations Act of 1947, often referred to as Taft-Hartley, makes it illegal for union membership to be term of employment. It is still legal to withhold part of an employee’s pay in order to off-set the cost union negotiations, a process sometimes referred to as ‘Fair Share.’  If the Employee Preference Act is passed it would do away with Fair Share. Union leaders have argued that if employees do not help pay for collective bargaining and pay negotiations, the groups would lose money and wouldn’t be able to adequately protect workers.

The House Judiciary Committee will debate HB 75 on Friday at 1:30 p.m. without any public comment period. The bill could be heard on the House floor as early as next week.